The site-specific sails, made by New South Wales artist Kate Scardifield from recycled synthetic material, are both a beacon, and a metaphor for the climate crisis.

Free/State curator Sebastian Goldspink explains that the orange colour in the work reflects that of the storm sails used by boats in an emergency: “It’s this sort of clarion call of distress.”

Goldspink describes Free/State as “a Biennial for the times”, having been developed during the “wild and unpredictable” past two years of the COVID-19 pandemic. Artists from every state and territory have contributed to the exhibition, with works including photography, painting, sculpture, installation and moving image.

Across the opening weekend, many of those artists will be presenting talks at AGSA to share insights into their work and what the Biennial theme means to them.

“So this idea that this was a place for free ‘men’; a place of freedom of expression, freedom of religion, and all these things were enshrined in 1836. It’s also enshrined that Aboriginal people are to be considered as British citizens, and of course that didn’t eventuate…”

He says Free/State also draws on ideas of improvisation as a driving force, and notions of crossing over into other states, including the spirit realm: “So the idea was that it was a generative title that was open enough but rooted in the history of this place.”

Paintings by Tom Polo in the AGSA’s Elder Wing are part of the 2022 Adelaide Biennial of Australian Art: Free/State. Photo: Saul Steed

One of the first works encountered by Biennial visitors entering through the front of AGSA is Ukrainian-born artist Stanislava Pinchuk’s sculptural installation The Wine Dark Sea, in which passages from Homer’s Odyssey and text from redacted reports from the Nauru and Manus Island detention centres have been engraved on marble columns resembling grave stones.

In the same space, Biennial artist Rhoda Tjitayi, from the APY Lands, has painted her traditional stories directly onto the wall and pillars at the entrance to the Elder Wing of Australian Art.

“She’s got some incredible paintings in the Biennial, but I asked her if she would be interested in creating this kind of portal… like an entrance point that you walk through,” Goldspink says of Tjitayi.

“Her grandmother is in the AGSA collection as well, so it was a nice tie-in to generations. That’s something that has come up a lot in the Biennial – relationship to family, and family stories. I think part of that is the time that we’ve just been through; one thing we all took stock of was our relationship with family, particularly if we weren’t allowed to see them.”

Around 10 large oil paintings by NSW-based artist Tom Polo have been placed among the collection of Australian artworks in the Elder Wing, while his video work clockwatch (end/during) is mounted on a wall in the AGSA atrium.

Major installation works in Free/State include a large chandelier by Kamilaroi/Gamilaraay artist Dennis Golding, made of casts of panels from the terrace houses he grew up in on “The Block” in Sydney’s Redfern, and Laith McGregor’s Strange Day, comprising more than a thousand bottles filled with messages – sent in by members of the public – which have been affixed to a gallery wall to spell out SOS. 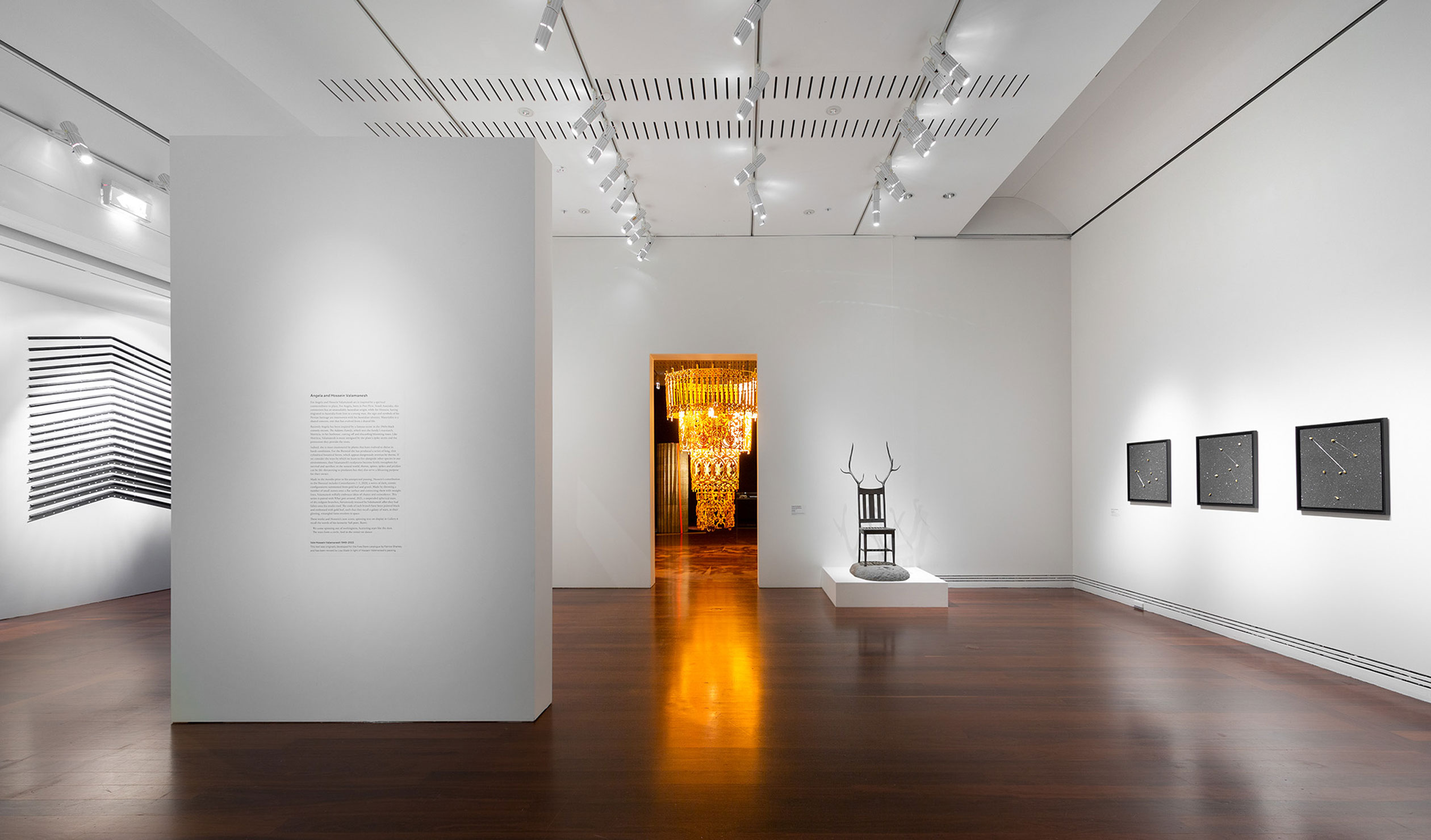 Julie Rrapp’s interactive work Write Me features 26 close-up photos of the artist arranged in a keyboard-shaped pattern. Visitors can use a keyboard to write to Rrap, with the images of her face warping and changing with each keystroke.

“The Biennial features three really interesting generations of artists: really senior artists [including Rrap], mid-career artists that are starting to work internationally and get acclaim, and then emerging artists,” says Goldspink.

Other senior artists exhibiting in Free/State include Angela and Hossein Valamanesh, with their Biennial work especially poignant following the sudden passing of Hossein in January. The display includes new pieces created both individually and together, as well as a wall showcasing items from the couple’s Adelaide home – among which is a photograph of their Australian Monument to the Great Irish Famine, which is located at Sydney’s Hyde Park Barracks and has etched into it the names of famine victims, including Goldspink’s great-great-grandmother.

The Valamanesh installation honours the two artists’ lifetime of collaboration, the curator says: “This space reflects their love and their art – two concepts that have been interchangeable for them.”

The 2022 Adelaide Biennial of Australian Art: Free/State, presented in association with the Adelaide Festival, opens to the public today at the Art Gallery of South Australia and continues until June 2. The opening weekend features a program of artist talks, performances, DJ sets and other activities (details here).

See InReview next week for our review of Free/State.