Aboriginal and Torres Strait Islander readers are advised this article includes names and images of people who have died.

Staunch: an Exploration of Aboriginal Queer Liberation has been curated by Dominic Guerrera and is  presented by Nexus Arts, as part of the Tarnanthi 2021 program. It includes works on loan from Flinders University Museum of Art.

Guerrara is a Ngarrindjeri, Kaurna and Italian writer, artist and Masters candidate. His creative work, and study, explores themes of decolonising, Indigeneity, queerness, and storytelling. This is the second exhibition he has curated for Nexus Arts. In 2020, through a curatorial opportunity with Nexus Arts and Flinders University Museum of Arts, Guerrara presented circles to us.

He says of his vision for Staunch:

This concept comes through clearly when viewing Staunch. The inclusion of the late Kym Wanganeen’s work (pictured top) feels like an act of community love and remembrance. Wanganeen was a Narungga, Kaurna and Ngarrindjeri artist, and a staunch advocate for the LGBTQI+ community in Adelaide. He was also active in multiple human rights and political issues. His Untitled mixed media on canvas is a strong statement of Country, truth-telling and First Peoples sovereignty. 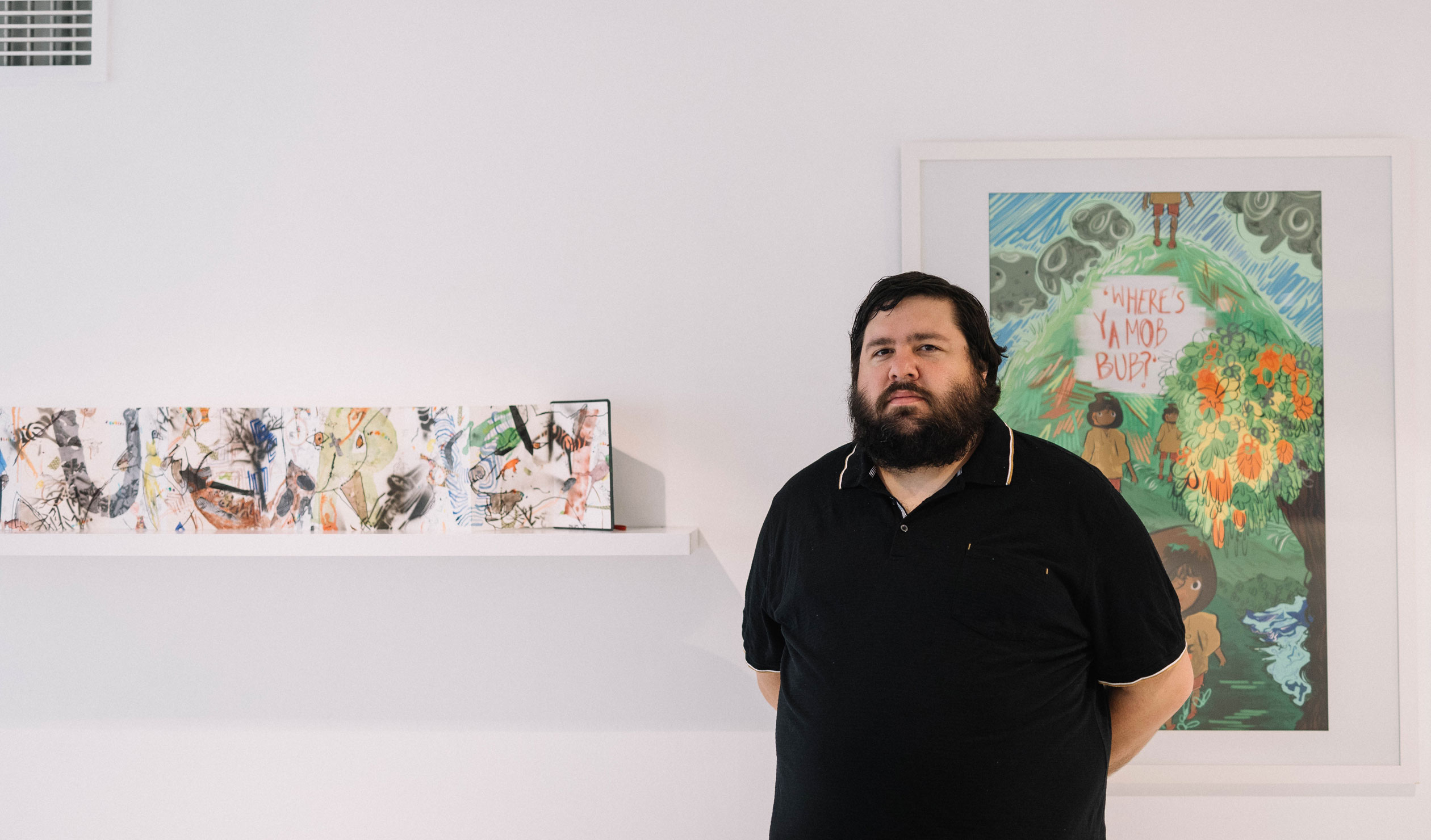 Being there (1998) is another stand-out piece. This is the type of “Koori kitsch” that Destiny Deacon is well-known for. An academic, artist and performer, Deacon is a descendant of the KuKu (Far North Queensland) and Erub/Mer (Torres Strait) people. The use of black dolls as photographic models is idiosyncratic, political and humorous.

Raymond Zada’s print Minority Report (2011) is mesmerising and powerful. Zada, an Adelaide-based Barkindji artist, has used the words “minority within a minority” to create a thought-provoking vortex.

Alongside the artworks are two previously published texts by award-winning Aboriginal writers Natalie Harkin and Alison Whittaker. And Noongar writer Claire G Coleman has contributed a new work, titled Noongar (2021), that connects to a section in her non-fiction book Lies, Damn Lies.

Harkin’s 2013 text We’re Here! (…a little something for Anthony Mundine) is a poetic clap-back to Mundine’s homophobic comments made publicly in relation to an episode of the ABC series Redfern Now. Natalie Harkin is a Narungga poet, artist and academic. In this poem, she asserts that Indigenous LGBTQI+ people have always been here, and always will be.

The new soundscape titled Ngoppin (2022), by Wanitjari Sumner, adds another dimension to the exhibition. Wanitjari’s partner Arika Waulu’s untitled is a companion piece to this soundscape. The clapping of their decorated digging sticks can be heard as the soundscape that moves listeners through Country and time. Sumner is a Victorian-based Ngarrindjeri artist, and Waulu is a Djap Wurrung, Peek Wurrung, Dhauwurd Wurrung poet, artist and community activator. 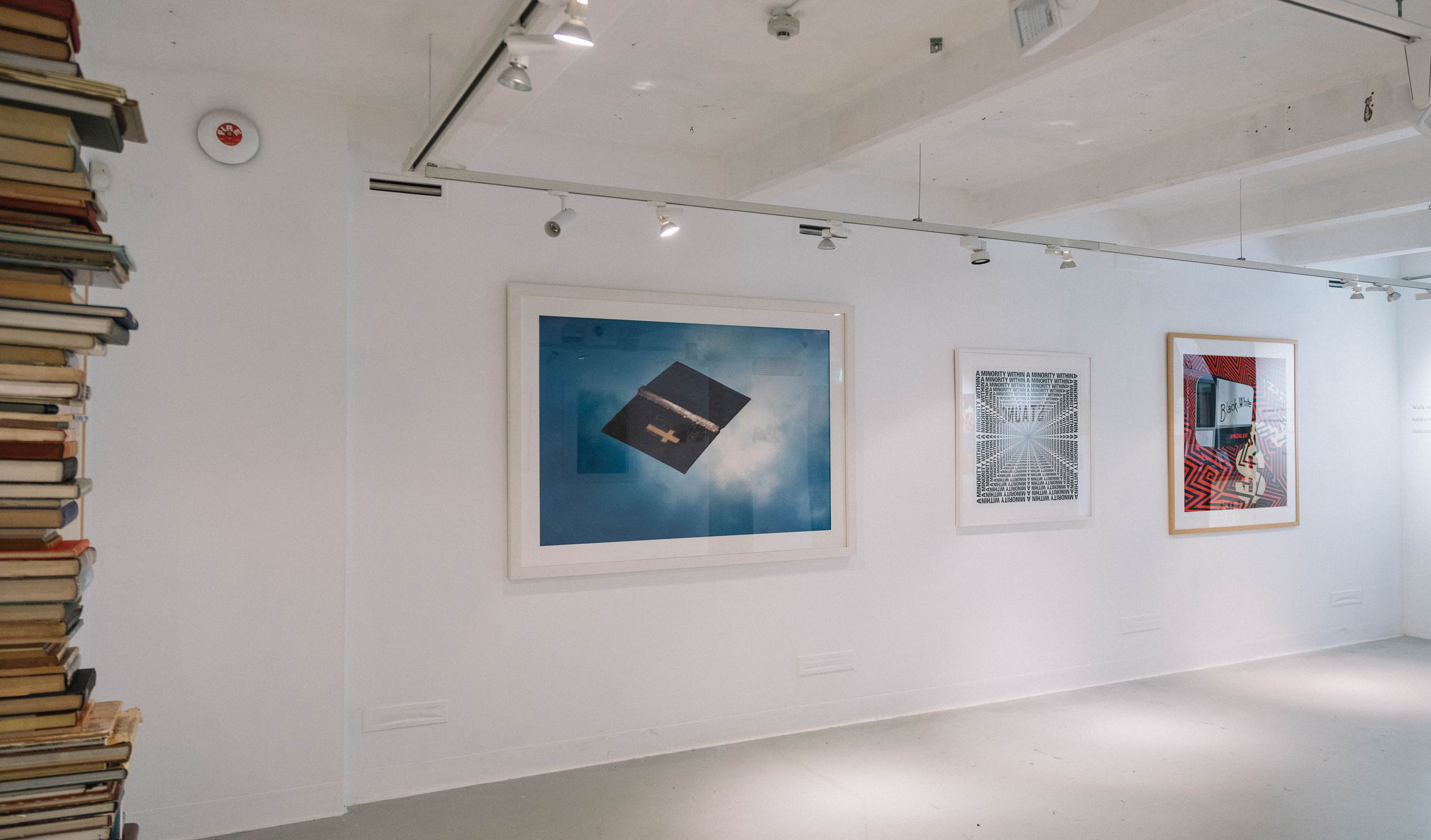 Guerrera says he purposely placed Kym Wanganeen’s canvas in the most prominent position. In exhibitions, this lead position is often called the hero piece, but he has renamed it the heroine piece. Guerrera says: “I wanted the heroine piece to represent the power of local organising. But also to pay respect to Kym as an artist and activist.”

This opening piece, by a local artist who is still greatly missed by many, is a perfect depiction of queer staunchness.

Staunch: An Exploration of Aboriginal Queer Liberation runs from January 18 to February 11, 2022. People can view the exhibition by appointment at Nexus Arts in the Lion Arts Centre or online through the virtual gallery that Nexus created in response to COVID-19. (Note that bookings for viewing Staunch are essential, and there are currently conditions of entry due to the pandemic.)

Karen Wyld is an author living on the coast, south of Adelaide.