Back when we were still free as birds to fly towards new horizons, South Australian ceramic artist and JamFactory head of ceramic studio Stephanie James-Manttan stood transfixed by the movement of a flock of starlings in the skies above the Cattedrale di Santa Maria del Fiore in Florence, Italy.

“My heart skipped a beat,” she says. “It was one the most beautiful things I’d ever seen.”

For those lucky enough to have witnessed such a sight, it is the uncanny motion of thousands of small birds that is so mesmerising. Flying in such close formation they appear as a single organism, the dark mass of the flock billows, spreads, contracts and expands against the sky as the birds move in unison, as if each were an individual cell within a single protean creature acting under an invisible, coordinating command.

The quiet beauty of the birds’ collaborative flight patterns befits the word used to describe such a flock in motion – a murmuration – and is echoed in the soft grace of the porcelain forms on display in Gallery Two. James-Manttan came across the Danish term for this – sort sol – while reading Vesper Flights, a collection of essays by the English writer and naturalist Helen Macdonald, and made it the title of this solo exhibition. Meaning “black sun”, it evokes the way millions of starlings darken sunset skies above the marshlands of south-western Jutland, Denmark, as they search for a place to roost for the night.

The phenomenon is echoed in James-Manttan’s process of creating the porcelain pieces on display at JamFactory. The 18 vessels are of varying sizes, though each is small enough to hold with both hands, all of them gently pale. Most have been left unglazed in creamy white, though dotted among them are pieces glazed with the rosy blush of erbium, or with the pale sea green of celadon, and their counterpointed arrangements highlight both their similarities and their differences.

The soft downlight of the display enhances the play of light over the intricate, simple marks patterned into the silky surface of the clay. James-Manttan uses three wooden tools to cut them into the clay while it is still wet, working her way around the silky, flesh-like surface of the porcelain in organic, yet regular chains.

She is inspired by patterns observed in nature – including, of course, the rising swoop and falling swirl of a multitude of birds – or in the organic rhythm embodied in an Indigenous woven basket. The direction of these patterned rows is enhanced by the grace of wing-like appendages on some of the pieces, creating the form of a vase with handles, or by deep, spiralling ridges in other, more bowl-like forms.

Their titles are a pragmatic description of the movement evoked by the patterned incisions that dance around the surface of the porcelain, or by the shape of the attached “wings”: This Way and Up #2; This Way, That Way and a Bit Out Both Sides #5. The serendipitous fall of shadow on the second is even reminiscent of the shape of a bird. 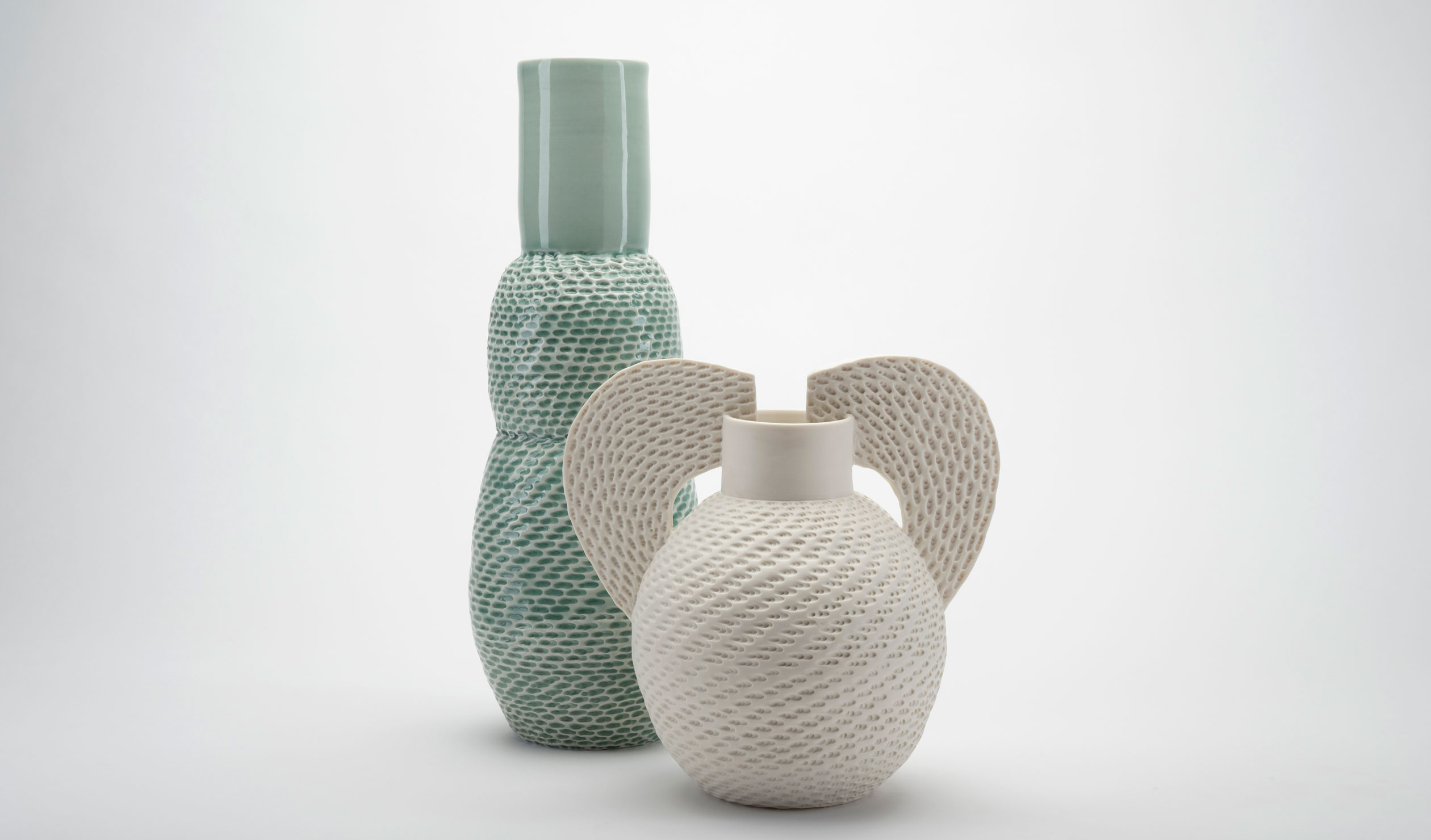 The pieces in Sort Sol mark a move towards larger sculptural forms that can contain James-Manttan’s conceptual explorations of murmuration more deeply. The momentum of her artistic development towards larger pieces seems to have been enhanced by her need to adapt her making process after suffering a shoulder injury while out walking her dogs; she constructs her larger works in stages, creating separate, wheel-thrown composite pieces which she then assembles to create a single form – a metaphor, perhaps, for the individual birds that assemble to create a single, living mass directed by some collective intelligence.

The intuitively shared spontaneity of this movement by the birds is reflected, too, in James-Manttan’s creative approach; instead of planning and sketching how each work will look, she uses her intuition to guide the shapes of the pieces she throws on her wheel before assembling them into seamless, sculptural pieces.

But it is not just the motion of the birds that James-Manttan finds compelling; she sees the collective consciousness of the flock that keeps the birds moving in spontaneous, yet precise unison, as a metaphorical reminder of the ever-growing need for humanity to come together and collaborate to solve global problems.

“It is amazing how these birds work cohesively in their hundreds, sometimes in their thousands, in such an uncertain…environment,” she says. “Not to sound cynical, but maybe humanity could take a leaf out of their book.”

Sort Sol is at JamFactory until February 13. All pieces on display are for sale.

What we know today, Friday May 20