As part of the Tarnanthi 2021 exhibition at the Art Gallery of South Australia, Trawlwoolway artist Julie Gough has created a foreboding presentation titled Psychoscape.

Welcoming visitors into the Gallery 8 space is a giant wheel. Its segmented inner and middle rims contain images of early-colonial Lutruwita/Tasmania – from John Glover’s A corroboree of natives in Mills Plains (1832) and from a government Proclamation Board, made during the late 1820s. Positioned in the outer rim are letters spelling out PSYCHOSCAPE.

A metal needle pivots at the centre above the four compass points and indicates the positions of South Australia and Lutruwita. This giant circle plays on a familiar concept, a wheel of future – in this instance, perhaps, a wheel of life. Where the needle falls becomes the indicator of one’s fate or destiny. For many Tasmanian Aboriginal people, fates were determined by colonisation.

Inside the exhibition space, Gough’s moving-image and sculptural works are placed alongside colonial Tasmanian paintings and furniture from the gallery’s collection. She draws frequently on museum and gallery collections – in fact, she has trawled though the AGSA’s before. This engagement with the collection is something the gallery actively supports.

Gough has been involved in past iterations of the Adelaide Biennial of Australian Art and Tarnanthi, and now in Psychoscape she continues her practice of excavating hidden and subsumed histories. She creates dialogues that unravel past readings of works to reveal the unspoken or concealed.

Gough can be regarded as a super sleuth and a time traveller. Her works of art are the result of scouring archives and collections, to uncover the histories of her ancestors and the effects their pasts have had on her. Gough’s works of art often investigate the period around the 1820s and onwards – critical decades when Aboriginal people witnessed some of the most horrific violence following invasion. She is a descendant of Woretemoeteyenner (c.1790–1847), from Tebrikunna in north-east Lutruwita, and of Mannalargenna (c.1775–1835), leader of the Plangermaireener people.

Included in Psychoscape is the newly acquired work The Promise II, a work by Gough which speaks to Tasmania’s notorious Black War of the 1820s, the “Black Line” and the forced removal from their lands of Tasmania’s Aboriginal people, including Gough’s family.

The Promise II comprises a found chair with cut-out images made from kangaroo vellum suspended from the chair’s back. The work is brought to life by light, with the illuminated cut-outs casting discomforting silhouettes on a wall. The cut-outs replicate images found in Governor Arthur’s Proclamation to the Aborigines (1830), a visual document painted onto wooden boards, whose pictograms were intended to show that Aboriginal people and settlers faced equal punishments under Vandemonian law for crimes of violence. This is the same work included on Gough’s “wheel of fortune”. The boards were fixed to trees in order to communicate to Aboriginal people the consequences of breaking the law. However, as The Promise II and Gough’s wider practice remind us, the concept of equal justice was only in principle, and Aboriginal people were murdered with impunity by colonists.

Psychoscape (River Clyde) is a moving-image work that references the gallery’s Eugene von Guérard painting Waterfall on the Clyde River, Tasmania (1877). Von Guérard depicts two men with fishing rods in a bucolic landscape by a waterfall. What isn’t shown in the work is the bloodshed that occurred along the river. Although this is not the exact site of a massacre, Gough’s research has found the Clyde River region was an area known for what she calls “murderous violence”, with several massacres recorded near the river and its tributaries. This violent history is masked by the painting’s serenity.

In Psychoscape (River Clyde), Gough renders the waterfall with blood, and as the water turns red the truth is revealed. She negotiated with landowners to visit the site. The irony of having to seek permission to enter onto Country is not lost on her. 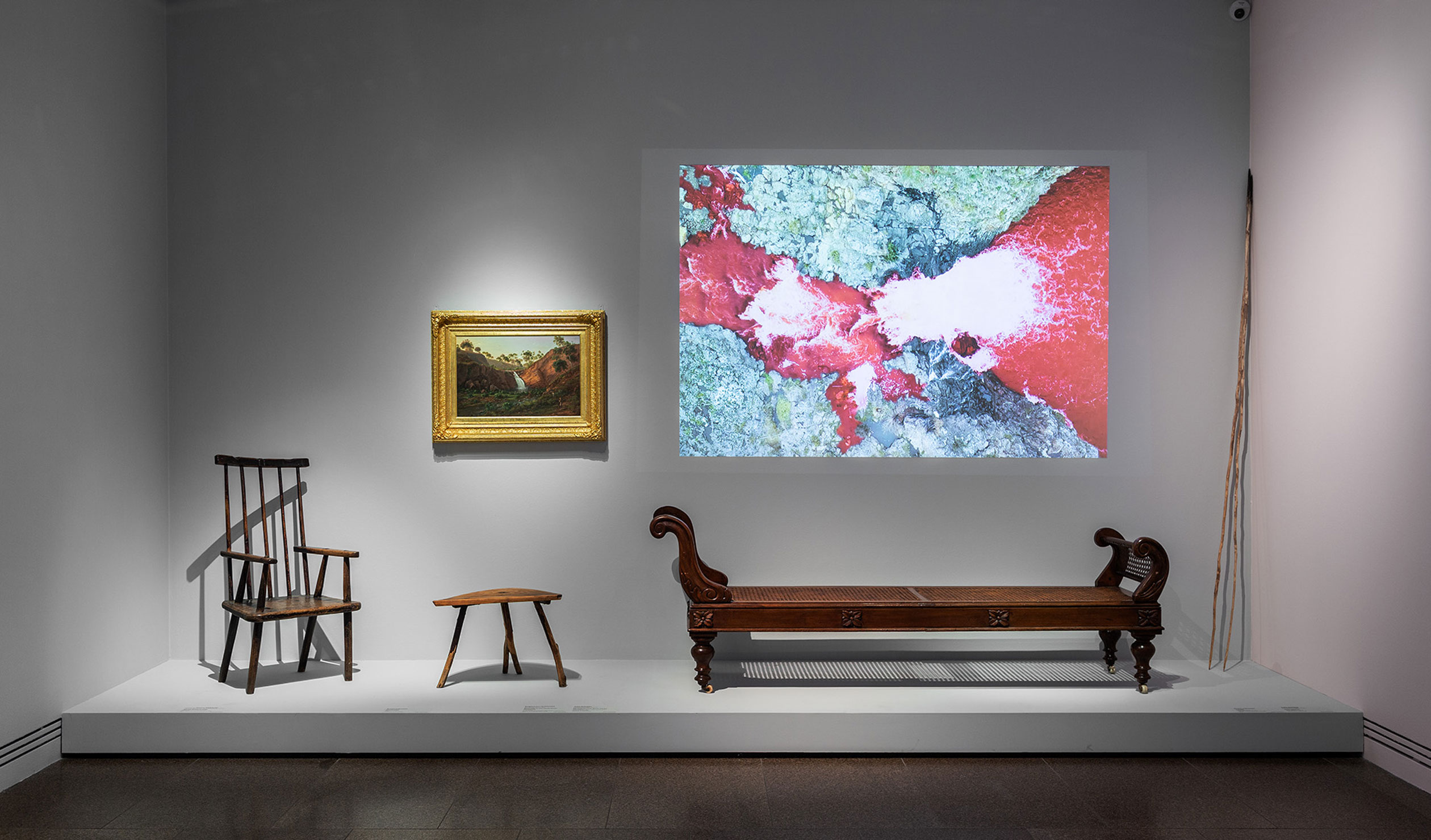 If every picture tells a story, what about an object? Positioned underneath Psychoscape (River Clyde) is a chaise made in Lutruwita around 1840. This elegant piece of furniture from the gallery’s collection suggests the status of its colonist owners. However, like paintings, objects tell additional stories. By situating the chaise below her moving-image work, Gough aims to reframe our understanding of this piece of furniture by acknowledging that it is haunted with the history of colonialism and the removal of Aboriginal people. Two spears carved by Gough stand alongside these works, placing Aboriginal people back into their story.

Psychoscape is an experiential display encouraging viewers to consider, listen and acknowledge the concealed side of Australia. Like Lutruwita’s history, Psychoscape is deep and layered and reminds us that colonial histories are still very much celebrated.

Although revealing Australia’s truths may be destabilising and confronting, for many the traumatic histories of this nation are present every day and passed from generation to generation.

Gloria Strzelecki is Associate Curator, Aboriginal and Torres Strait Islander Art, at the Art Gallery of South Australia. This article is part of an occasional series in which AGSA curators offer an insight into specific works or displays at the gallery.

Julie Gough’s work is showing as part of Tarnanthi, which continues at the AGSA until January 30.