It’s been three decades since life first led Regine Schwarzer to the Adelaide Hills, and the jewellery designer and maker is still finding inspiration in the colours and contours of the landscape around her.

“The vastness of the country was quite amazing; the wide skies, the colours of the earth. It’s very special and probably not imaginable for anybody who’s from Europe,” she explains of her initial travels around Australia.

While Schwarzer was intrigued by the geology of her new home, she initially found the kinds of materials that were available in the early ’90s often weren’t to her taste (“gem dealers only had boring, round and oval-faceted [pieces], nothing interesting,” she recalls). As she built up her own skills as a stonecutter, a new evolution of her practice took root, crafting the raw gems and minerals she encountered in ways that leant into their natural form.

Years earlier, Schwarzer’s formal training had set her on a more clean-cut path – something she’s enjoyed unlearning ever since.

“My training in Germany was quite different to how people learn here, it’s a different approach, different aesthetics,” she says of a traditional training process that encompasses everything from life drawing to silversmithing.

“I went to a school which is where I stayed for three and a half years; my training was very based on those techniques, which I find important, but I also try to let go of them – it can drive you insane,” she laughs. “I really let loose, I’ve let go of the absolute pedanticness.

“I work a lot more organically now, I use elements of nature and in just the last few years I’ve started using plant material as well,” she says, pointing out recent works that incorporate sliced cross-sections of stones from Port Willunga, chrysoprase from Western Australia, and found plant material that she casts and moulds in silver.

“I have more material than I can use in my lifetime. I use the Watsonia quite a lot, which grows rampant,” she says, highlighting some recent work. “It’s an invasive weed coming from South Africa, but their rootstock is quite amazing.” 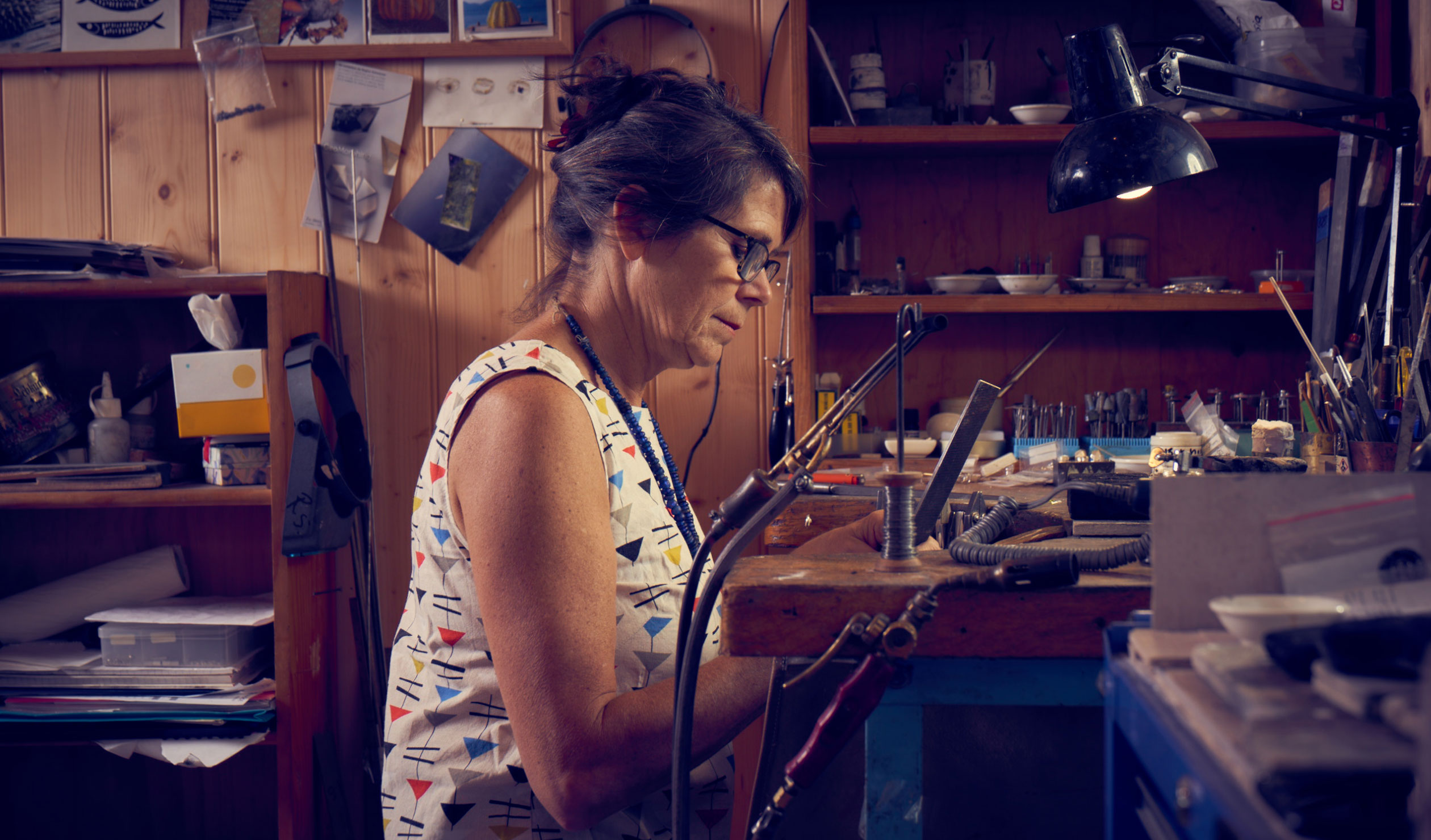 Regine’s workstation sits by a window looking out over the hills. Photo: Aubrey Jonsson

The intervening decades have seen her studio set-up shuffle between spaces at Jam Factory, Hahndorf Academy, and stints working from home. This space, a converted garage perched up the top of her Bridgewater backyard, has been her primary base for the past four years, and is lined with tools and materials she’s accrued in that time. At its centre is a vast, circular jewellers’ bench with four workstations, an imposing bit of furniture that becomes the heart of the studio when Schwarzer opens her doors for workshops and open studio days.

“I teach short day classes for the novice, and I’ve had artists in residence here, with whom I did a mentorship. I’ve been working for probably over 40 years in the field so I have a couple of things to share, and I really enjoy that.

“And it’s nice to have students come in because I keep the space much cleaner,” she laughs. “It’s nice for me to meet my customers as well, it’s really wonderful – a lot of people came here who’d collected my work who I’d never seen before.”

Watsonia cast in silver: “It’s an invasive weed… but their rootstock is quite amazing.” Photo: Aubrey Jonsson

While her own workstation sits by a window looking out over the greenery of the hills, the outside world also makes its presence felt inside, from samples of gems, plant life and other accrued flotsam arranged on shelves and windowsills, to the large chunks of a tree stump that have been repurposed as benches and seating.

“I had a very big Ash tree which was massive – way too close to the house, it needed to be removed,” she explains. “I got them set up because I hosted a spoon-making workshop and needed some space to do some hammering, so I got to finally set it up nicely, and now the hammers are all displayed.”

And while the boundaries between the inside and outside might blur, at least Schwarzer has her kelpie Luka on hand at all times to maintain some form of work-life balance.

“He’s a good companion,” she says. “He’s six now – and he tells me in the afternoons that it’s time to stop work and go for a walk.”