On a visit to the Hanrahan Studio in 2019, inspired by the 23 prints already in Flinders University’s collection, the FUMA team saw an opportunity to honour the legacy of Adelaide-born writer and artist Barbara Hanrahan in a retrospective timed for the 30th anniversary of her death. Over the two years following that visit, curator Nic Brown and her team were able to gather together works on paper from private and public collections around Australia with the generous assistance of Hanrahan’s life partner, sculptor Jo Steele, and gallerist Susan Sideris, resulting in this thrillingly prodigious retrospective.

Hanrahan’s all-too-short career resulted in 15 books and more than 400 works of art, her creative practice taking her from Adelaide to London, where she lived for many years, and back to Australia, where she divided her time between Adelaide and Melbourne. This prolific creativity is reflected in the dazzling impact of the mass of linocuts, lithographs, etchings, woodblock prints and paintings on paper that press in on one another across the four walls of the FUMA gallery in a salon-style display, colours glowing among the blocks of monochrome and intricate black line work in neon-bright pinks, sombre reds and greens or bilious yellows. 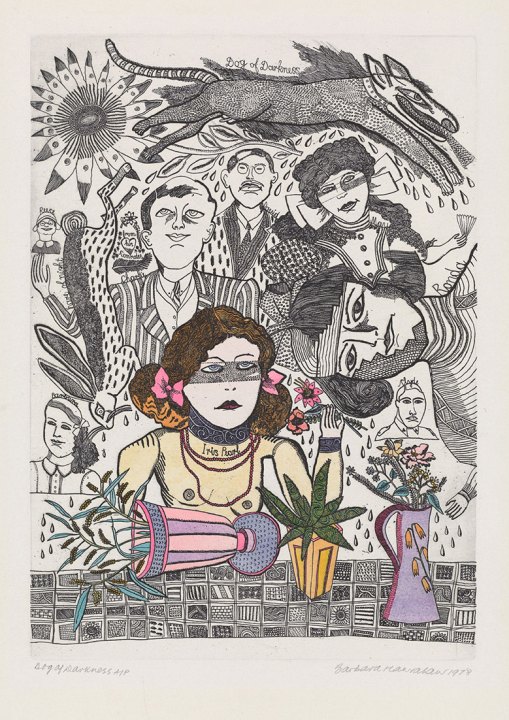 Some works are hung so high visitors need to stand on tiptoe to read the details. It seems fitting, somehow, reflecting the effort required to excavate the cryptic ambiguities within Hanrahan’s work that lie beneath the deceptively decorative surfaces. The crowding of the works, leaving little space between them, conveys a sense of her creative life force that pulses from each image, as if it is too great to be contained.

“Decorative” is used by some as a pejorative term, as if decorative and “serious” art are never destined to meet; yet Hanrahan’s skilled control of line, whether carved from wood, lino or etched in copper, pleases and draws the eye into a compulsive examination of detail, only to be met by a profound contemplation on the human condition, bound as it is by birth, sex and death; or a punch of biting social commentary on the societal expectations of women, still relevant almost half a century later. 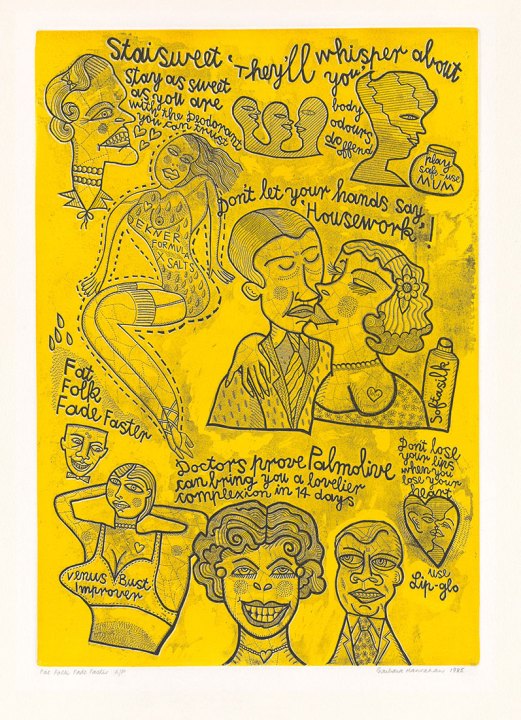 At times, the come-hither of the layered detail is met by intentionally veiled meanings that carry the weight of private references that remain forever cryptic, lying inaccessible but still sensed beneath the surface, like buried treasure.

Hanrahan first began expressing her creative drive through printmaking in 1960, making it her predominant medium of visual expression. The carving of the plate of copper, piece of lino or block of wood renders it an art object in its own right; its singular, negative image turned through intense pressure into a positive that can be reproduced multiple times, reflecting the tension between Hanrahan’s intensely personal, private vision and her public-facing social commentary.

There is something mystical about her work, both in content and execution; the intricate symbols and patterns Hanrahan carves and etches feel like incantations, her print plates – private, perhaps even magical objects – transformed by the alchemy of pressure into public works. This is just one of the many tensions between opposing forces that co-exist within her work: between life and death; societal expectations of women and women as sexual beings; of women in private, domestic spaces where they dream versus performance, sexual and otherwise, on stage; of the dreaming versus the waking worlds; the earthly entwined with the otherworldly; of plant and woman, human and animal; and of living, knowing that death is inevitable. 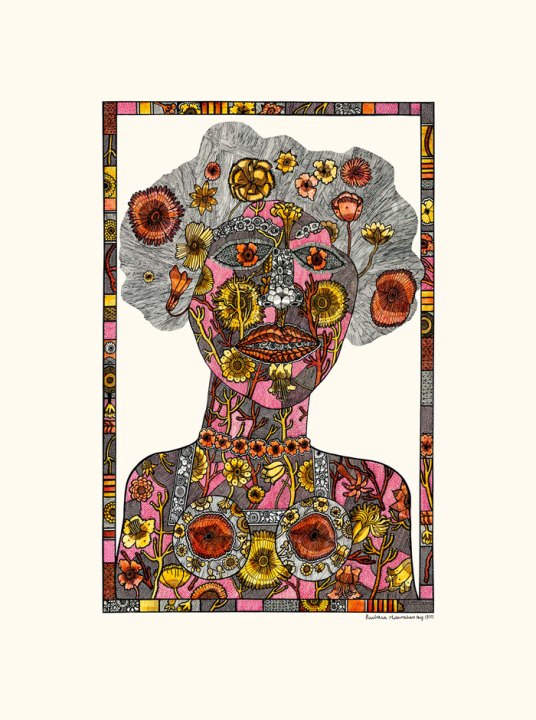 The works are grouped thematically, rather than chronologically, on separate walls according to the predominant themes that ran throughout Hanrahan’s work: Sex, Beauty and the Stage; Domestic Comforts and Anxieties; Becoming Plant, Becoming Animal, and Celestial Bodies and the Afterlife.

The compressed, salon-style hanging also highlights the feeling of timelessness and interconnectedness in all Hanrahan’s works, regardless of when they were created. It heightens the sense of an overarching consistency that transcends the varying styles, moods and print techniques she used throughout her career, the mark of a singular vision.

Her works shimmer with life, sex, anger, humour and death. Her exploration of a life experienced viscerally is illustrated by quotes from DH Lawrence; of the meshing of the domestic everyday life with the strangeness of esoteric otherworlds, by quotes from William Blake. 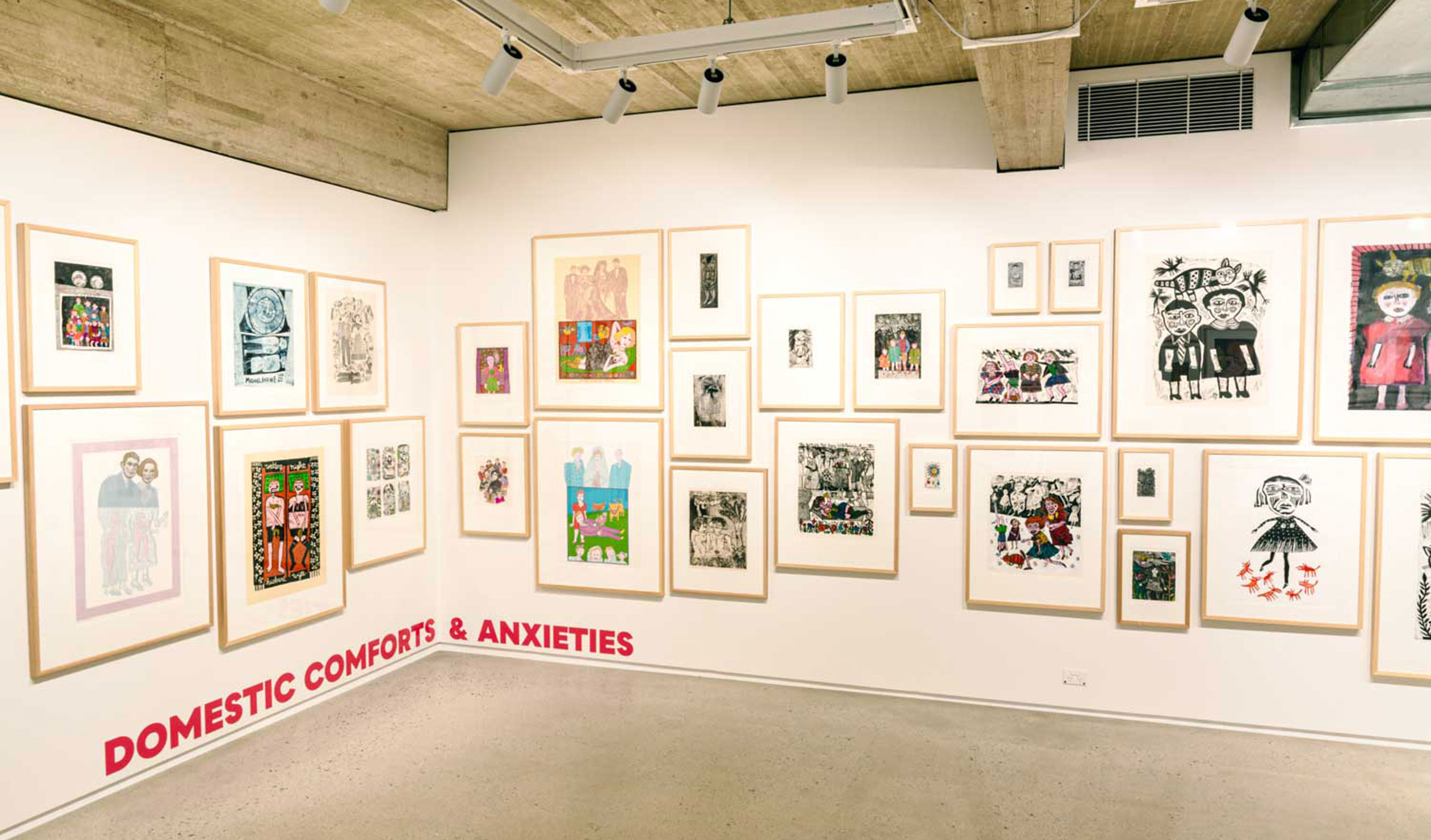 Works are grouped according to the predominant themes explored by Hanrahan.

The exhibition is accompanied by an excellent catalogue with enlightening essays by curator Nic Brown; Professor Jacqueline Millner, Associate Professor of Art at La Trobe University; and Elspeth Pitt, Curator of Australian Art at the National Gallery of Australia. The wealth of colour plates allows further exploration of the finer details that might have been missed during the visit.

There is a richness and depth to Hanrahan’s work that lies beyond the decorative, material layering of colour, pattern or lines. Meanings yield themselves up the longer you look, and the more you look, the more you are rewarded.

FUMA has put together an extraordinary, perhaps once-in-a-lifetime, exhibition that deserves lengthy contemplation, perhaps even multiple visits. It will go on to tour country South Australia (then interstate), and it is worth negotiating the maze of the university campus at Bedford Park to experience the privilege of seeing so many of Hanrahan’s idiosyncratic, vibrant works before it disappears.

Bee-stung Lips: Barbara Hanrahan Works on Paper 1960-1991 will be at Flinders University Museum of Art until October 1.