“Basically I paint about the outsider, loneliness, the human struggle,” Tom Phillips explains as we both survey a pair of pieces he is currently working on – two solitary nude figures rendered with thick brushstrokes and a malaise that feels just as tangible.

“I use the rawness of the colour to give that primal feel – it’s not about painting happy pictures, it’s about the rawness of it,” he says. “They might be nude figures, but I’m expressing them more as naked or exposed. People say their worst nightmares are public speaking or finding themselves naked – that’s what I wanted to express. It’s to show their vulnerability.”

Phillips says he grew interested in art at a young age, when it became an invaluable way to process the world around him as he navigated dyslexia and dysgraphia.

“I always learnt about the world through visual images; as a child I was always using art, but never realised there was such a thing as ‘an artist’.

“I’ve always had to struggle to read and write everywhere I go, and that sort of comes through in my interest in the human struggle. Some might call that the ‘violence’ of life ­– but I say it’s more the struggle. Because there’s no guarantee you’ll come home tonight alive… that’s probably where that existential theme runs through my work a bit.

“I was doing paintings before I went to art school, on magazine covers, building models, drawing, I was always doing something. I sort of had a naive attitude that you just do your art on the side, and you have to have another job ­– I’d never heard of art schools.”

That discovery came after his first exposure to the work of Sidney Nolan, a formative influence whose impact can still be seen in the mix of catharsis and chaos expressed in Phillips’ characters. A subsequent scholarship at Adelaide Central School of Art in the early ’90s kicked off a three-decade practice that can be seen – and felt – in his studio space.

“If it goes all wrong, I just scrape it off,” he says of the thick curtain of semi-dried paint that teeters over the wooden ledge of his easel – forming a kind of sedimentary record of hours, days and years spent with brush in hand.

“I got that easel when I was in art school,” he explains. “I’ve dragged it around ever since to all my different studios. The drier bits are over many years, and the wetter ones from this year – that’s why it’s still soft.”

Today his trusty easel sits in a snug, open-air corner of praxis ARTSPACE studios in Bowden. Working alongside artists like Roy Ananda and Elizabeth Bowen, it’s been his primary base for the past three years.

“I had a show here at praxis and Patty [Chehade, the gallery and studio’s founder and director] offered me a spot,” he says. “We all get on quite well with each other – most of the time there’s only about two, three people here at the same time.” 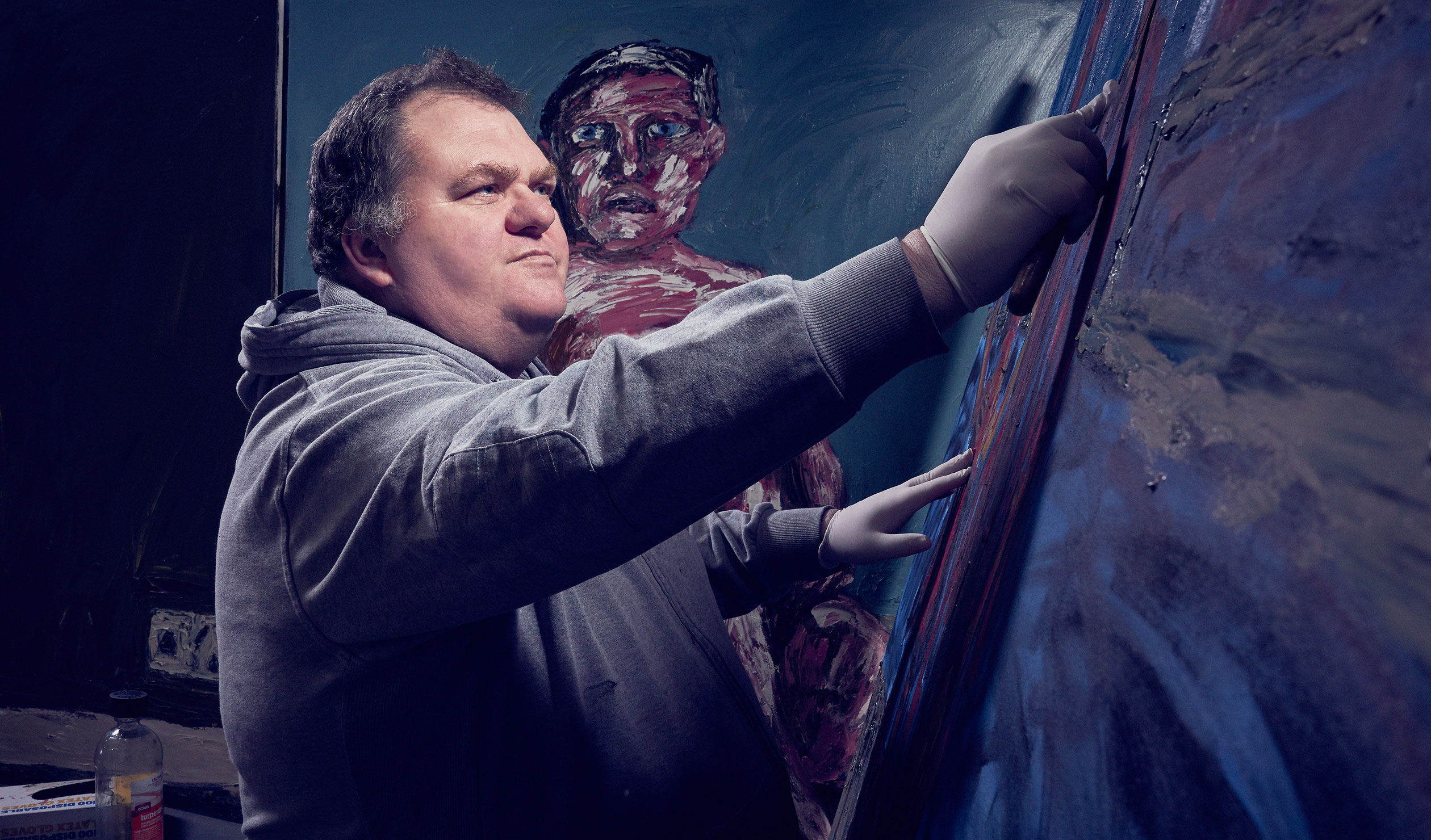 Praxis ARTSPACE studios in Bowden have been Tom’s primary base for the past three years. Photo: Aubrey Jonsson

Along with canvases in various stages of completion, Philips’ workspace features a variety of magazines and other materials that he thumbs through for inspiration. “I’m like a magpie, I just collect images and poses. I don’t know what I’m going to do with them straight away ­– I still don’t know what my paintings are going to look like until I see them finished.”

He prefers to base the figures in his work on found images, finding that painting real people can present a barrier to the confronting, universal emotions he hopes to unlock. “I want that primal naivety, and if I have a person there often you fall into the trap of trying to draw them too realistically – which I don’t want to do.”

Phillips is a finalist in the 2021 Don Dunstan Foundation Award presented as part of the SALA Festival, and a collection of his works is showing at Main Gallery throughout August in the SALA exhibition Another day, another lonely night.

“This one talks about loneliness, that one talks about body size,” he says of two featured works, which were created amid the heightened isolation of the past 18 months. “But I didn’t want to make it 100 per cent [inspired by] COVID, because I think a lot of this loneliness exists already. COVID’s just brought it to the mainstream – it’s always been there.”

And so has Phillips, diligently working away at his easel to capture a side of humanity that many of us might prefer to look away from.

Tom Phillips’ SALA exhibition is at Main Gallery, 156 Hallifax Street, until August 31. See more of the artist’s work on his website.