Established Adelaide artist Olga Sankey has worked as a printmaker for more than four decades and in her role as lecturer at the South Australian School of Art (1989-2015) has been a key figure in developing the skills of younger practitioners. Sankey’s work is the subject of a collection display at the Art Gallery of South Australia, and runs parallel with the major exhibition of her father and uncle’s art in Dušan and Voitre Marek: Surrealists at Sea (showing until September 12).

The display, which includes the diptych Forked tongue, 2007, highlights Sankey’s interest in the complex ways in which language functions. Her fascination with words and the way meaning and identity are formed through language stems from her bilingual upbringing.

Born to the Czech émigré artist Voitre Marek and his wife Vera, Sankey was raised speaking Czech to her parents. The world outside the home – school and friendships – was conducted in English, while her weekly attendance at Catholic mass immersed her in Latin.

Sankey’s negotiation of the world and her relationships through these different languages sharpened her understanding of the way in which words are both concrete and abstract. She notes:

“Dad was the one who appreciated the absurdities of a foreign language: He could never hear the word ‘pioneer’ without cupping his hand to his ear and laughing at the idea of a ‘pie-on-ear’.

“At a very early age we heard how Dad and his younger brother were tasked with looking after baby brother Dušan as both parents had to go out to work. He and Eugene taught Dušan many incorrect words for things, eg to call a train a goat and vice versa, which made his first teachers doubt his sanity!

“This story was my first experience of the fact that language is nothing more than a human construct; a series of sounds that we agree to attach particular meaning to. ‘Goat’ = a goat because we’ve all agreed to equate that particular sound with that specific animal. And yet while it’s a construct, mis-translations, misunderstandings and mis-use can have such dire consequences.”

Sankey’s devout Catholic upbringing left a strong imprint on her, and the works on display incorporate the preoccupations and habits of her childhood and adolescence. In the diptych Forked tongue, Sankey contrasts two forms of script: the handwritten and the printed. The artist distinguishes between these, noting that the “awkward marks of children learning by rote are set against the Voice of Authority emanating from a burning bush”. Although language is used to exercise power, Sankey speculates: “What if Moses misunderstood the message when he came across the burning bush in the desert?” 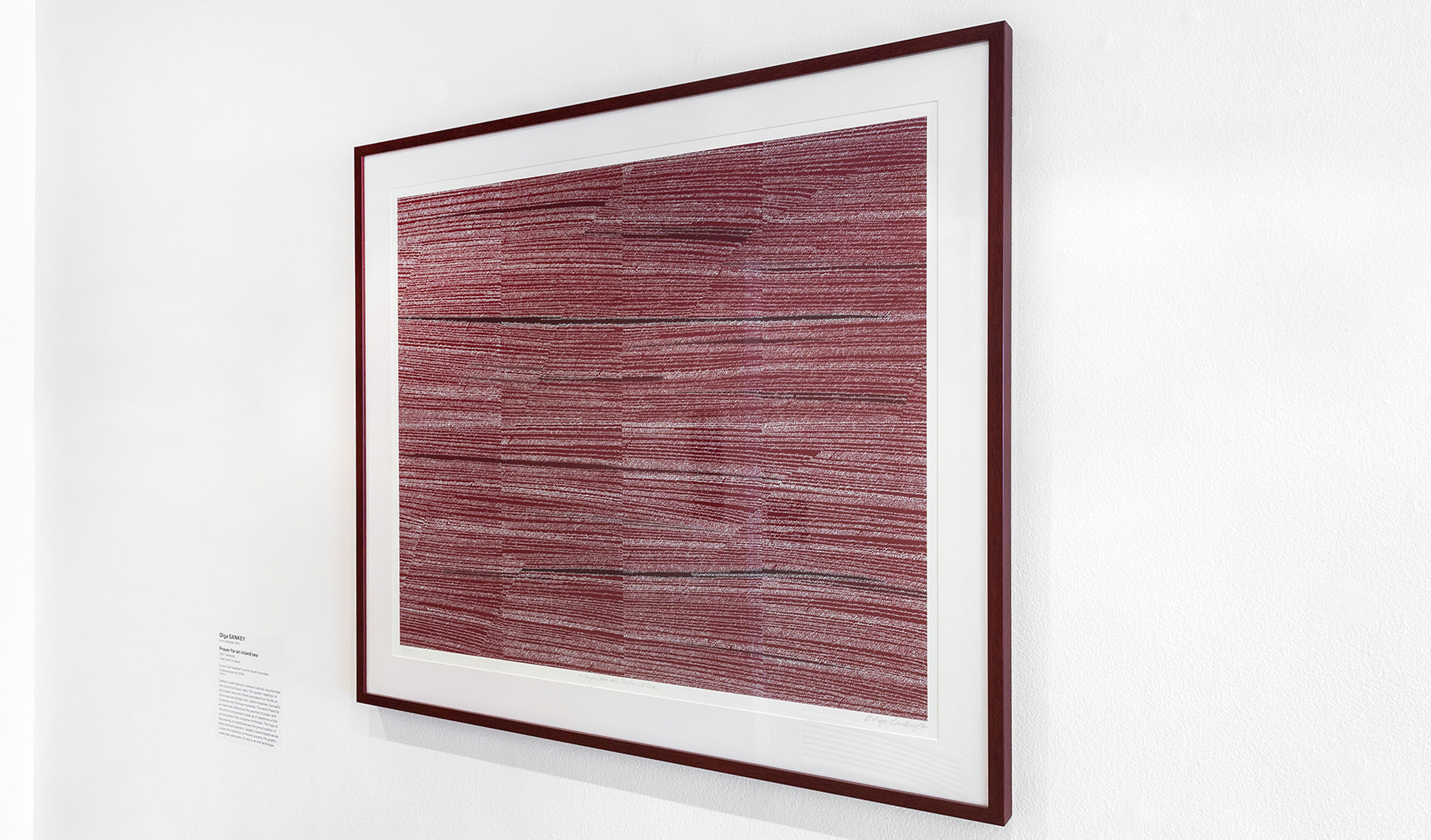 In Prayer for an inland sea, 2007, Sankey references the practice of prayer, with the entire composition made up of repetitions of the prayers that comprise the Rosary. The hope of discovering an inland sea was the preoccupation of early colonial explorers. Sankey’s barely legible words convey their fervent prayers, the graphic marks like sediments of rock in an arid landscape.

The theme of textual misunderstandings is also the subject of Sankey’s early work, Conceit 1999, which references the famous woodcut of a rhinoceros by the German Renaissance artist Albrecht Dürer. Dürer, who never saw the creature, based his 1515 image of the rhinoceros on a written account of a rhinoceros that was shipped from India to Portugal in 1515. Dürer’s detailed representation, not surprisingly, includes many inaccuracies, including a dorsal horn. 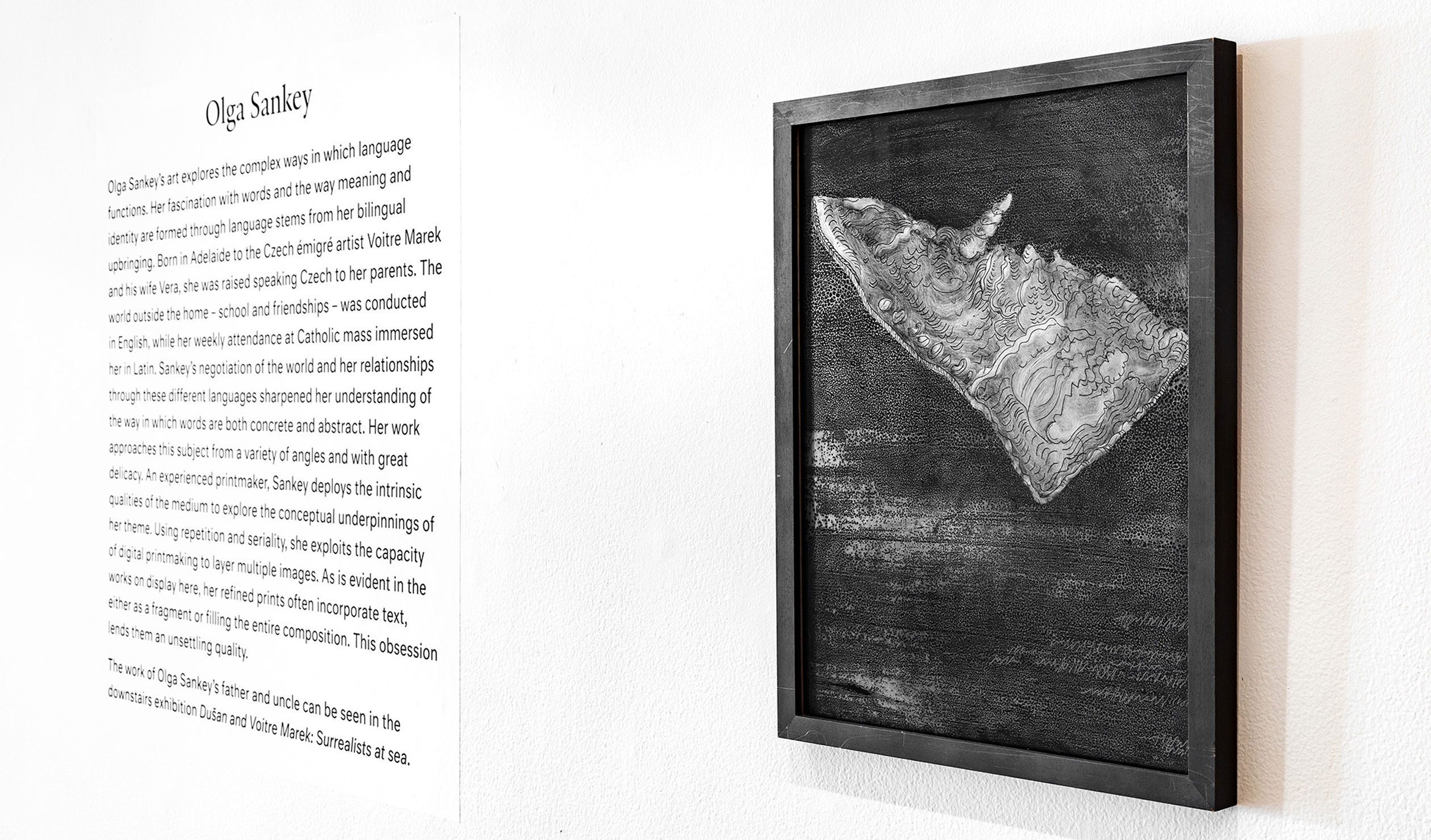 Of the experience of seeing her father and uncle’s work presented in the exhibition Dušan and Voitre Marek: Surrealists at Sea, Sankey reflects that although she was familiar with many of the works – from drawings, paintings, sculpture, animation and jewellery – the impact of seeing them brought together by curator Elle Freak made sense of all the various components, and that the inclusion of the brother’s writings added a whole new dimension.

Maria Zagala is associate curator of prints, drawings & photographs at the Art Gallery of South Australia.

Olga Sankey (standing, second from right) with her family in 1957 at Cape de Couedic on Kangaroo Island, where her father Voitre was lighthouse keeper. Photo: Marek archive