The Indigenous-owned and operated APY Art Centre Collective launched in 2017 and opened the APY Gallery in Sydney the following year, then the Adelaide gallery ­in mid-2019.

In the 2020-21 financial year, the collective reported $3.1 million in total sales – including $2.4 million from the galleries – of which 84 per cent was returned to APY communities.

Of the 20 new and emerging artists supported by the Adelaide studio, seven have been shortlisted for national art awards, including three for the prestigious Wynne Prize, while others have had work acquired by museums in Australia and overseas.

APY Art Centre Collective manager Skye O’Meara told InReview it originally signed a five-year lease with the University of South Australia, which owns the premises at 9 Light Square, with an option to renew for a further five years.

However, the university is terminating the lease early, in March 2022, and plans to redevelop the building into the UniSA Enterprise Hub, which it describes as a new UniSA “front door” for industry and community engagement.

“The university is already conducting building works around this space, which has been very difficult for the artists here,” O’Meara said. “The whole experience has been really disappointing… we invested in this building an amount that was appropriate to a 10-year term. Really, we’ve had one good year and one COVID year.”

The issue was raised last week in parliamentary estimates when Opposition Leader Peter Malinauskas asked Premier and Minister for the Arts Steven Marshall if, “under the current funding arrangements”, the APY Art Centre Collective’s Adelaide gallery would be shutting down.

In response, the Premier stated that the State Government provided “a very small contribution to the APY art centre”, adding: “They are an art centre which prides itself on bringing in revenue from the sale of its artworks.”

He said that for some time the State Government had been concerned the gallery needed to find a new site in Adelaide.

“I understand that various people across government and the private sector and the NGO sector have been working with members of the APY Art Centre Collective to look for an alternative site. It would be fantastic to keep that facility going in Adelaide but they were not renting premises from the South Australian government; they were in the private rental market, and I understand that lease is coming to an end.”

A spokesperson for UniSA said this morning that its 2019 licence agreement with the APY Art Centre Collective foreshadowed the possibility of redevelopment and “provided for the university to terminate the agreement for any reason relating to the redevelopment of the building”.

“In recognition of the impact of the Enterprise Hub building works, the university has waived rent for the APY Art Collective for a year until March 2022, while it continues to occupy the premises. The university has offered to assist the art centre in seeking alternative premises.”

The current gallery and studio space is around 500sqm, and O’Meara said the collective would like to secure a new site of around 750sqm to create room for a larger exhibition area.

The collective supports around 50 artists in Adelaide and some 500 on the APY Lands, with about 20 artists working in the studio every day. They range from senior, experienced artists to successful emerging artists such as Zaachariah Fielding and Sally Scales. 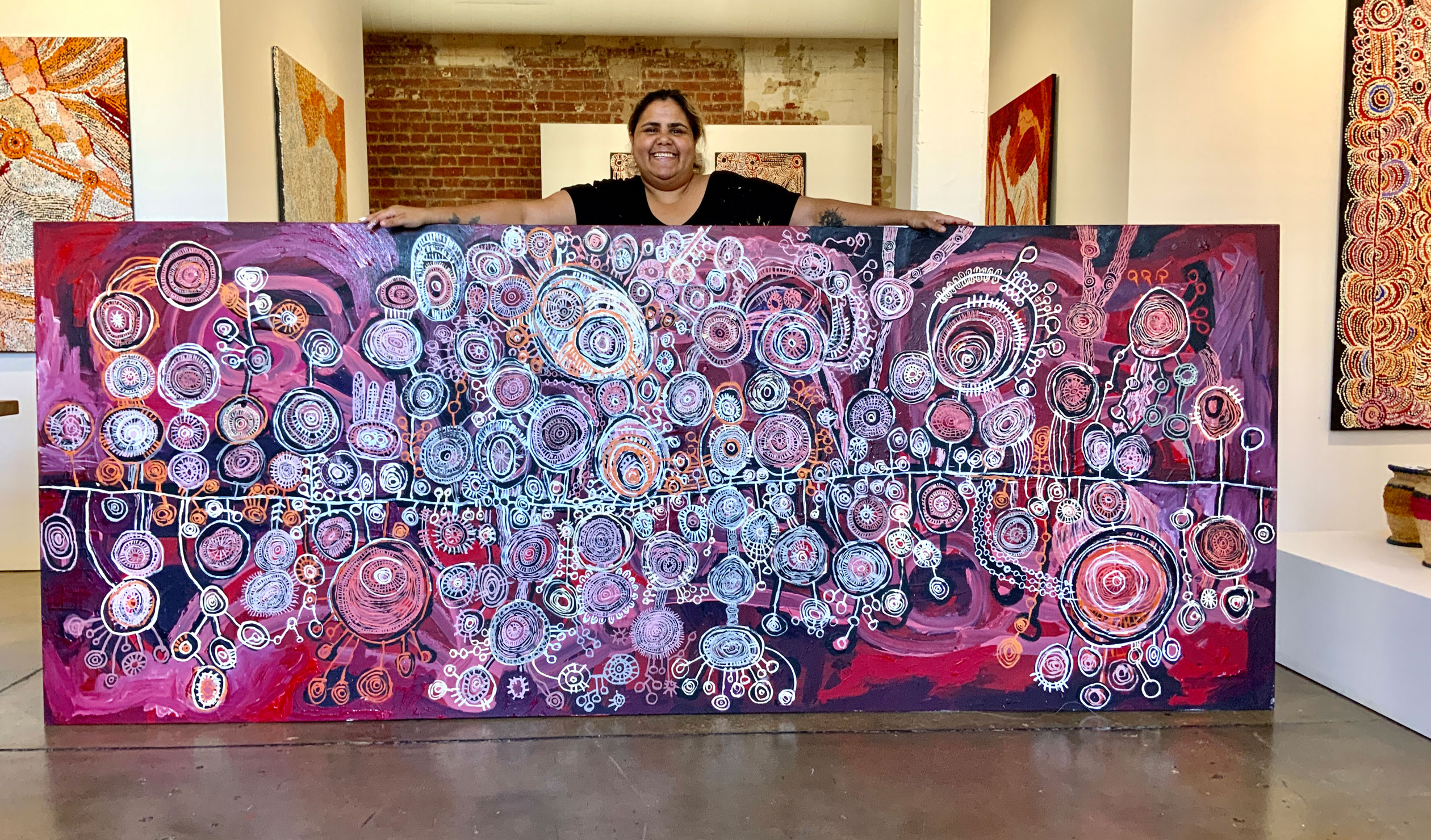 Emerging artist Sally Scales with one of the works she exhibited in APY Gallery earlier this year. Photo: APY Art Centre Collective

O’Meara told InReview the APY Art Centre Collective board was looking at several options for the Adelaide gallery and was working with supporters in the commercial space, “but the reality is we don’t have our solution confirmed”.

“We’re determined to find a new site and I know that will happen but I think Peter Malinauskas’s questions go further than that. When you’re talking about funding structures, the funding structures in this state are confusing and hard to understand.”

Despite its successful outcomes for artists and APY communities, she believes the APY Art Centre Collective receives the least government funding of any Indigenous arts organisation operating in South Australia.

O’Meara would like senior government representatives to meet with the collective’s board to discuss its needs and challenges “in a constructive and meaningful way” outside the “champagne events” associated with exhibition openings and other celebrations.

“We’re really independent and we’re not asking everyone to fix our problems but it does feel like the State Government and the Adelaide City Council are in a position where they could help.”

Asked for comment today, a State Government spokesperson said the Premier meets regularly with members of the APY Art Centre Collective, “as he does with members from across South Australia’s artistic community”.

“The APY Art Centre Collective has been provided with $50,000 pa in rent relief,  and receives an annual contribution to its operations of $70,000 pa,” they said. “The collective, and the independent arts centres aligned with it, are able to apply for contestable funding through a range of Arts South Australia programs like any other organisation.

“Over the past four years the APYACC, and its aligned art centres, have has received over $200,000 in support from the SA Government through contestable project grants.” 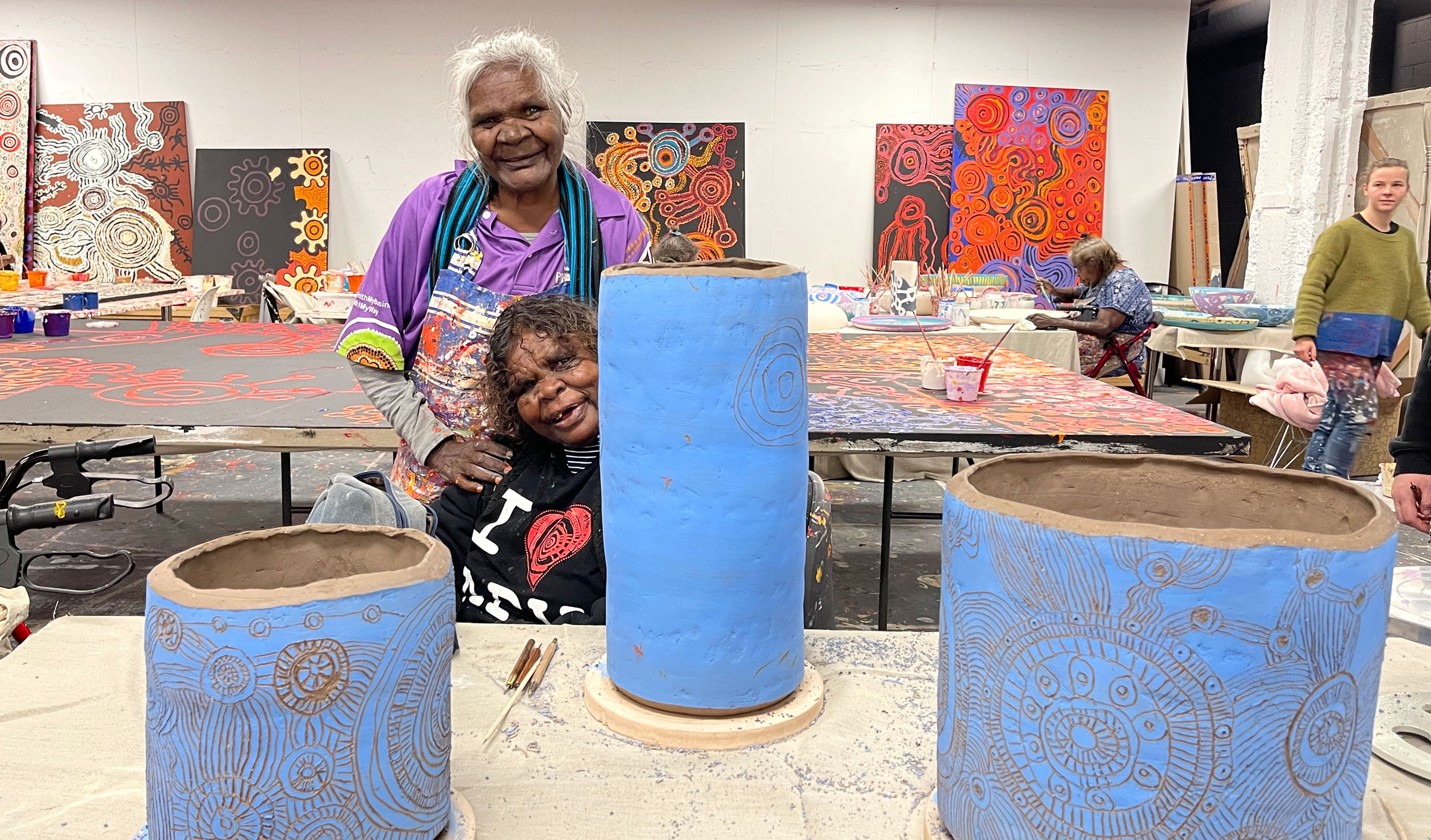 Margaret Richards and Yaritji Heffernan, pictured in the APY Gallery studio in Light Square, have both been finalists in the Wynne Prize. Photo: APY Art Centre Collective

The group of Anangu elders who began APY Art Centre Collective did so with the aim of increasing income for the young and emerging artists of the APY Lands, as well as boosting employment opportunities. The galleries are seen as a way for the artists to connect with a wider audience beyond their remote communities, to gain professional development and to broaden their networks in the arts sector.

“The APY Art Centre Collective is the only organisation which represents artists in all APY communities – we are now supporting artists in Umoona Community, Coober Pedy and around 45 Indigenous artists here in Adelaide,” O’Meara said.

“For most of our participants this is their only access point to meaningful employment and independent income. The work we undertake with art centres in supporting improved health and well-being for Indigenous people living in Adelaide and on the APY Lands is also unmatched.”

The work of Indigenous artists from the APY Lands has gained national and international attention, with O’Meara currently communicating with four overseas museums about major projects planned for the next few years.

Now that the Adelaide APY Gallery has gained traction, those behind it our determined that it should continue to make a positive impact and further its reach.

Its search for a new home comes at the same time the State Government is working towards building a $200 million Aboriginal Art and Cultures Centre, which is intended to be the “jewel in the crown” of the Lot Fourteen development on the old Royal Adelaide Hospital site.

“The new museum at Lot Fourteen will bring a time of unprecedented opportunity for Indigenous artists in South Australia; we know it will be an international hit,” O’Meara said. “It is of vital importance that at this time the engine room of Indigenous art production is supported.

“Indigenous artists must be supported at the very core of their work – this will support a safe and sustainable industry and ensure the development of a new museum with integrity and more meaningful outcomes, both within the museum itself and also in the communities where the art is being produced.”