From his home studio just north of the city, artist Jason Sims dreams up mixed-media works that play with light, shape and perception. Full of carefully balanced angles, surfaces and reflections, the results are often futuristic and architectural, which make his occasional forays out of the gallery and into the public sphere an intriguing equation.

This month, Sims unveils his second major public artwork in the Adelaide CBD, Golden Rhombohedron (Obtuse). Commissioned as part of the inaugural Illuminate Adelaide program, this skewed cube on Grote Street is actually the younger sibling of a work he installed on Bank Street back in 2017.

“I’m stoked that I can complete those two works ­– they were always intended to be a pair of works, and those two shapes form an integral part of the concept,” he says of the complementary but non-identical shapes that now bookend the Market-to-Riverbank route.

“They’re called Golden Rhombohedrons. Without getting too technical, they’re a unique, three-dimensional form both made up of six rhombus shapes – which are actually in the golden ratio. The two shapes are made of the same proportioned rhombuses – six sides – but just configured a different way.

“One becomes acute, which is on Bank Street, and one becomes obtuse. They’re unique as well, because those two shapes are the only two shapes made up of the same [components], that can fit together.” 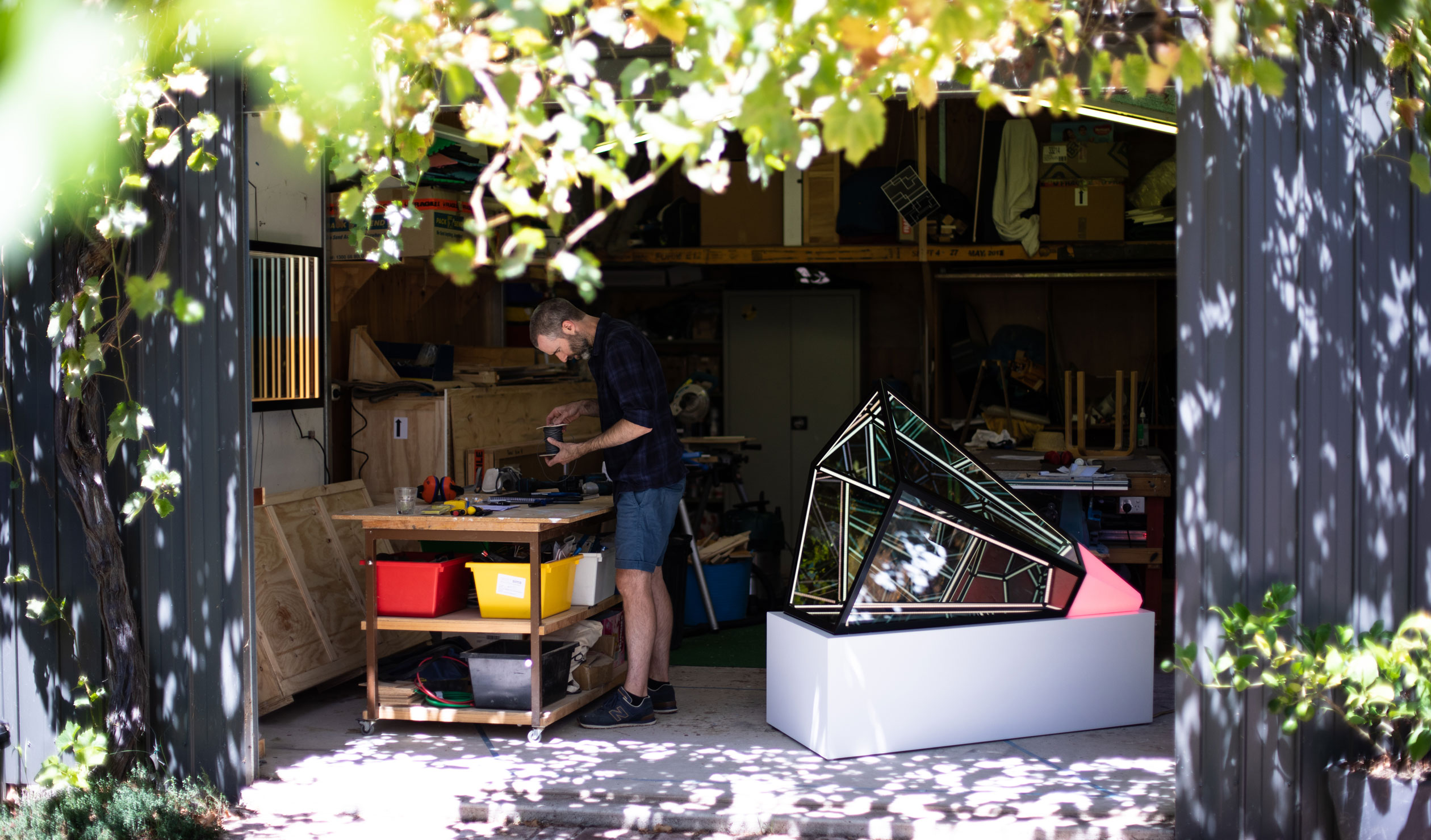 Like much of Sims’ practice, their creation began at home in a large shed-turned-studio in his backyard. But the heightened scale and platform of these larger public works demand an extra level of collaboration – and some bigger spaces.

“It starts from the most basic idea: a drawing, and then paper and cardboard shapes, just starting to play with that. Then it becomes a 3D model, or something more sturdy, and you start to really hone in on the design and nut out all the intricacies.”

To bring the tessellating configuration of Golden Rhombohedron (Obtuse) into reality, Sims enlisted Wingfield-based fabricators Brister & Co – the same firm that wrought Bert Flugelman’s Spheres (aka the “Mall’s Balls”) into reality – before relocating to the cavernous Edwardstown studio of Gray Hawk Design for the final assembly.

“The work comes from Brister as a framework sitting on an assembly cradle, so I can wind it around to work on it. I unload it and set about painting the inside, doing the lighting and the capping; there’s a base mirror and then the glazing happens. All the assembly that happens, from the raw frame to pretty much the finished product, happened in there.” 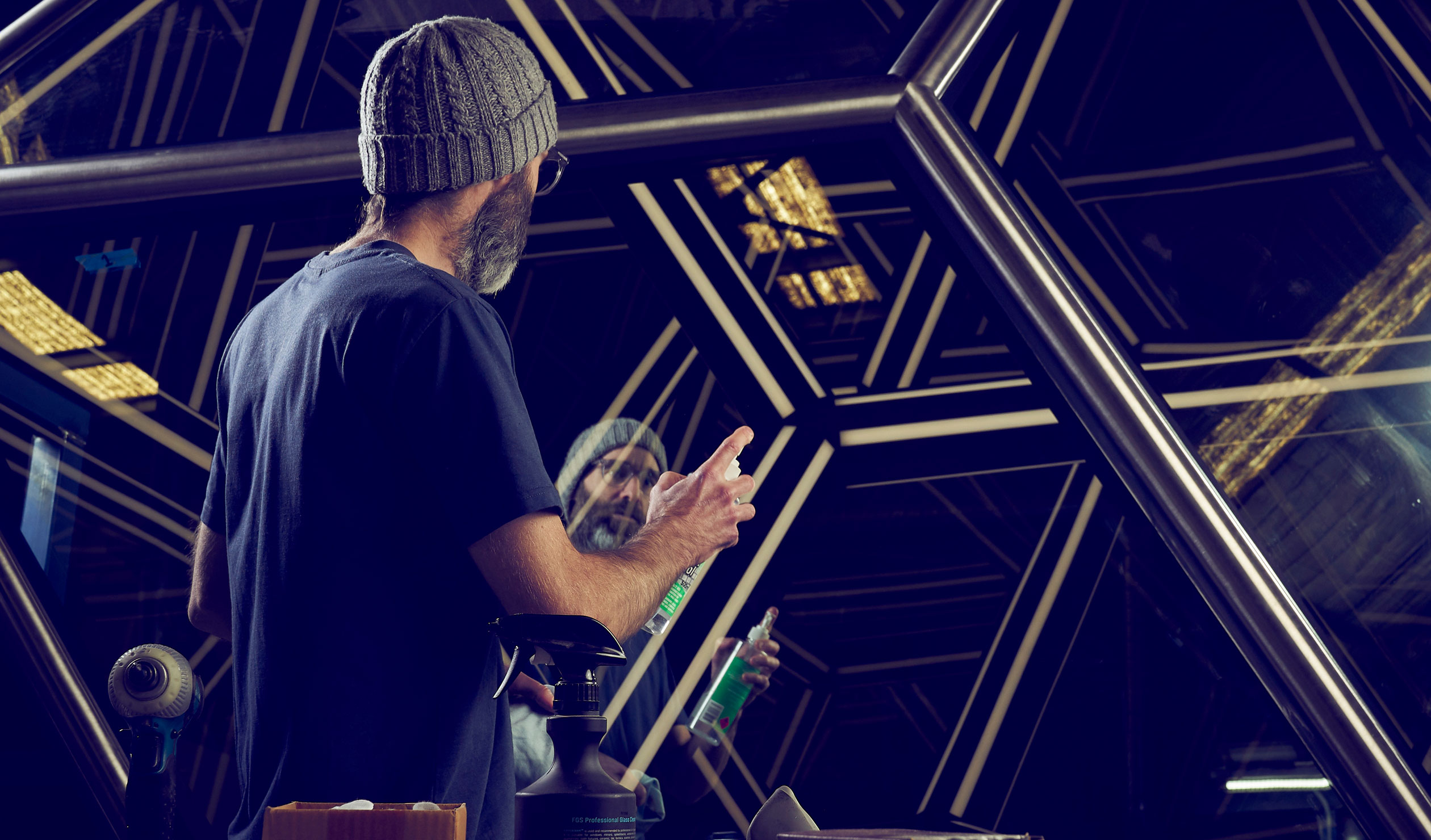 Then comes the installation process, as the work is fixed in place at its new home – an experience that brings a mix of trepidation and release that Sims compares to a footballer on game day.

While his gallery-based creations are often highly personal, these public works are about negotiation, not only with fabricators, crane operators and council regulations, but also with the broader public who will engage with the work on an entirely different level to its white-boxed counterparts.

“It’s such a balancing act; that’s a lot of what public art is,” he says.

“When I’ve done a big project it’s nice to step away. I definitely love working in the studio creating exhibition work that starts and ends in my head – it’s fairly uncompromised,” he says, noting plans to exhibit work in Amsterdam, Mykonos, London and at Melbourne’s MARS Gallery. “But it is interesting, thinking about how people will perceive the work.”

Sometimes that takes unexpected forms, from an artwork being turned into an ad hoc jungle gym by small children, or a skate park by teenagers. 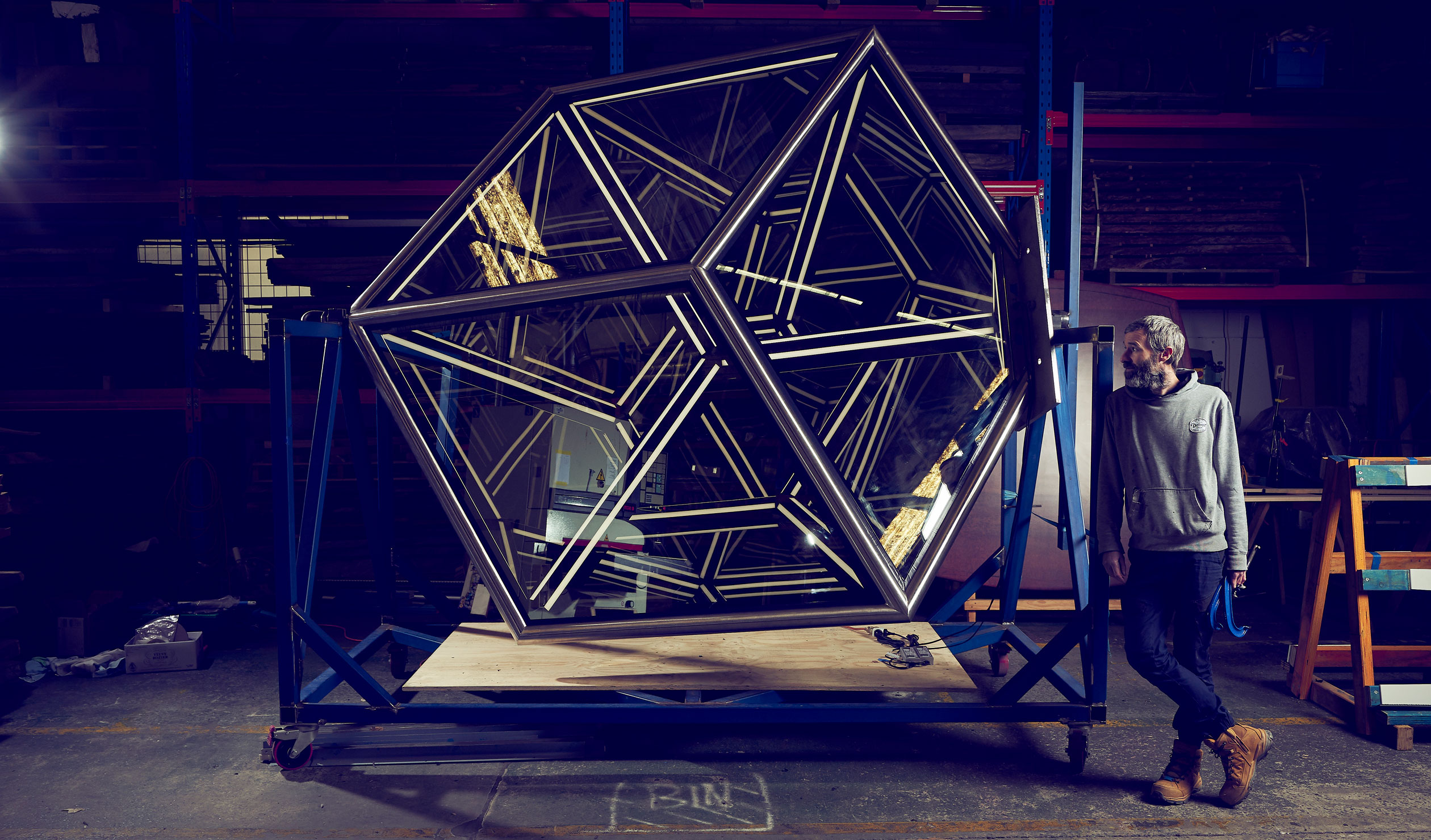 “I did discover that people like to have a smoke on the concrete plinth I made,” he laughs somewhat ruefully of one way Golden Rhombohedron (Acute) has become part of the furniture of Bank Street. “I often see people when I go past with their backs turned to the work – it’s always there.”

“When it comes to public art, I’m not really the kind of artist that looks at a preconceived story,” Sims explains of his shapes. “I see these works in some ways as a bit of a blank canvas; it is about building community, building stories within that link,” he adds, while admitting the reflections and intersecting lines within the works allude to the criss-crossing lives of the people who pass them each day.

“The idea of the stacking is about the work – and that link in particular – building memory and significance over time.”

And, hopefully, Sims’ work helps get that balance just right. 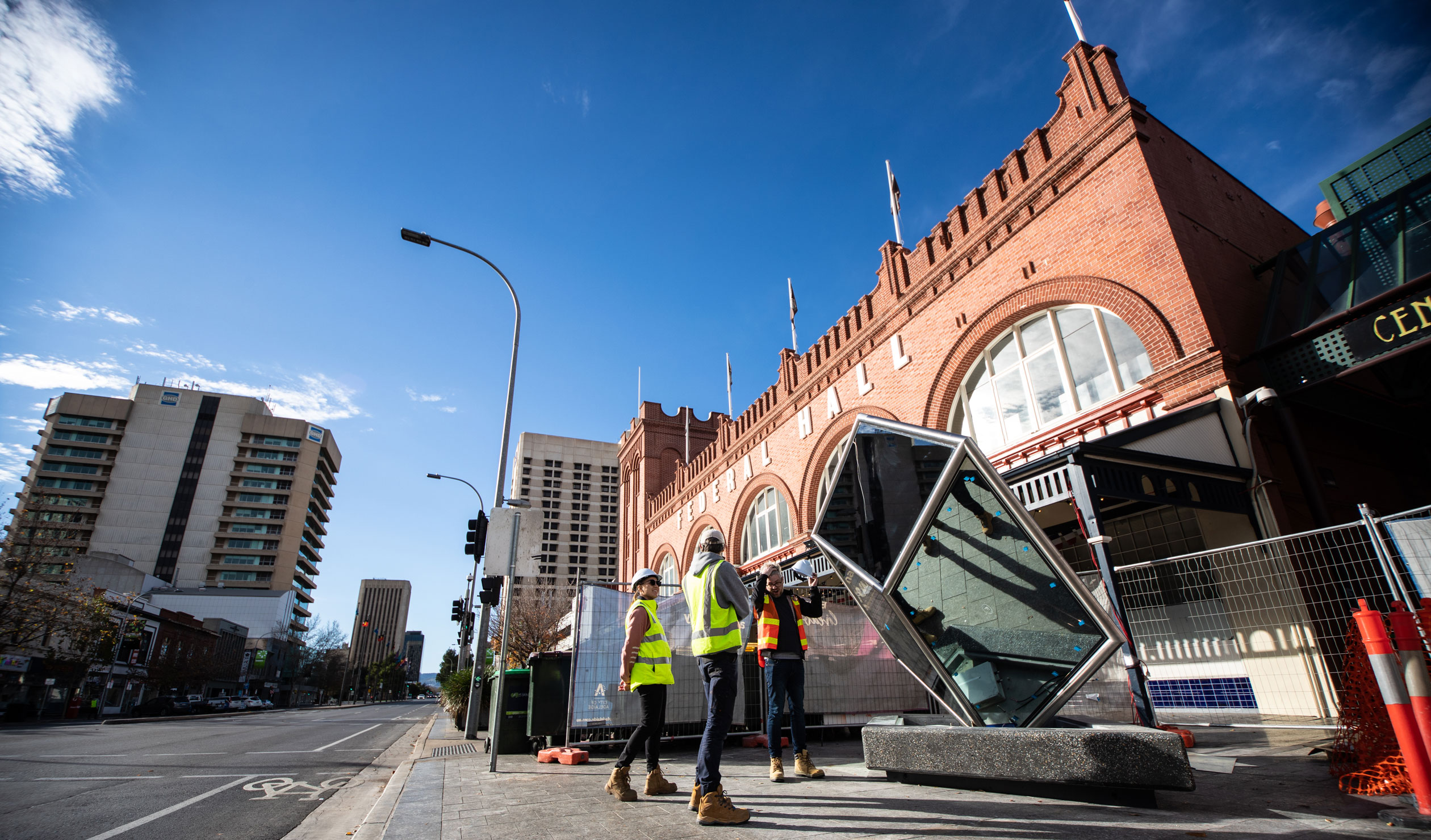 Read more about Jason Sim’ practice on his website.