At 27m long, Tarutharu the Kaurna Skink sits on a hill in the zoo and is one of four giant lanterns made by Melbourne-based A Blanck Canvas for Light Creatures, part of the inaugural Illuminate Adelaide festival.

Adelaide-based contemporary artist and muralist Elizabeth Close, an Anangu woman from the Pitjantjatjara and Yankunytjatjara language groups, was commissioned to create the design for Tarutharu. She worked closely with Kaurna and Narungga man Jack Buckskin to translate his story of skink, as told to him by his elders, onto the artwork.

“What we wanted this artwork to represent is the significance and story of the skink,” says Close, who is passionate about the importance of public art.

She says the skink weaves through cultural landscapes, carrying dreamtime stories and ideas with its motion; it represents fluidity, movement and strength.

“The journey is on a riverbed that speaks and comes down to the Kaurna people and their way of life and being,” Close says.

The palette and texture of the artwork created for the skink speak directly to the landscape: the deep blues and teals of the ocean and coast, the earthy tones of the land, the red and orange of fire, and warm and inky purples representing the hills and the night sky.

“The dark and dusty purples speak to Mount Lofty, which is a significant place for Kaurna people,” Close says. 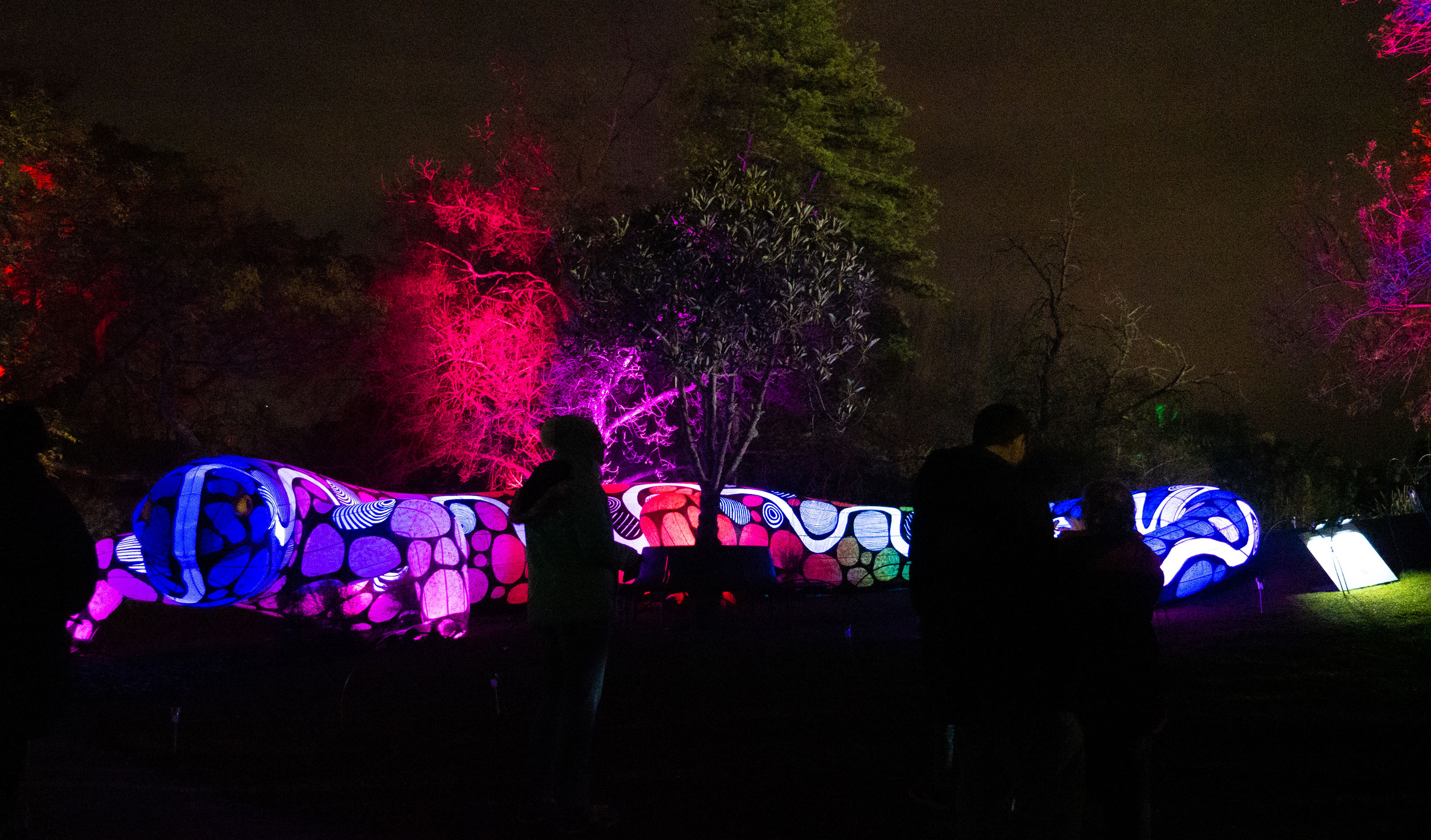 Tarutharu is a highlight of the Light Creatures experience. Photo: Aleisha Young

Her 2D visual piece was transformed into a striking 3D work in collaboration with A Blanck Canvas, which made the lantern at its warehouse in Melbourne.

“The process took multiple edits as we had to make sure every colour and texture pattern was visibly represented in the piece,” Close says.

“The Light Creatures event is important and a step forward in the connection and understanding of the Kaurna people. I am very pleased to be working with Adelaide Zoo to visualise the importance of Kaurna artwork that is created and represented by me and other First Nations artists.” 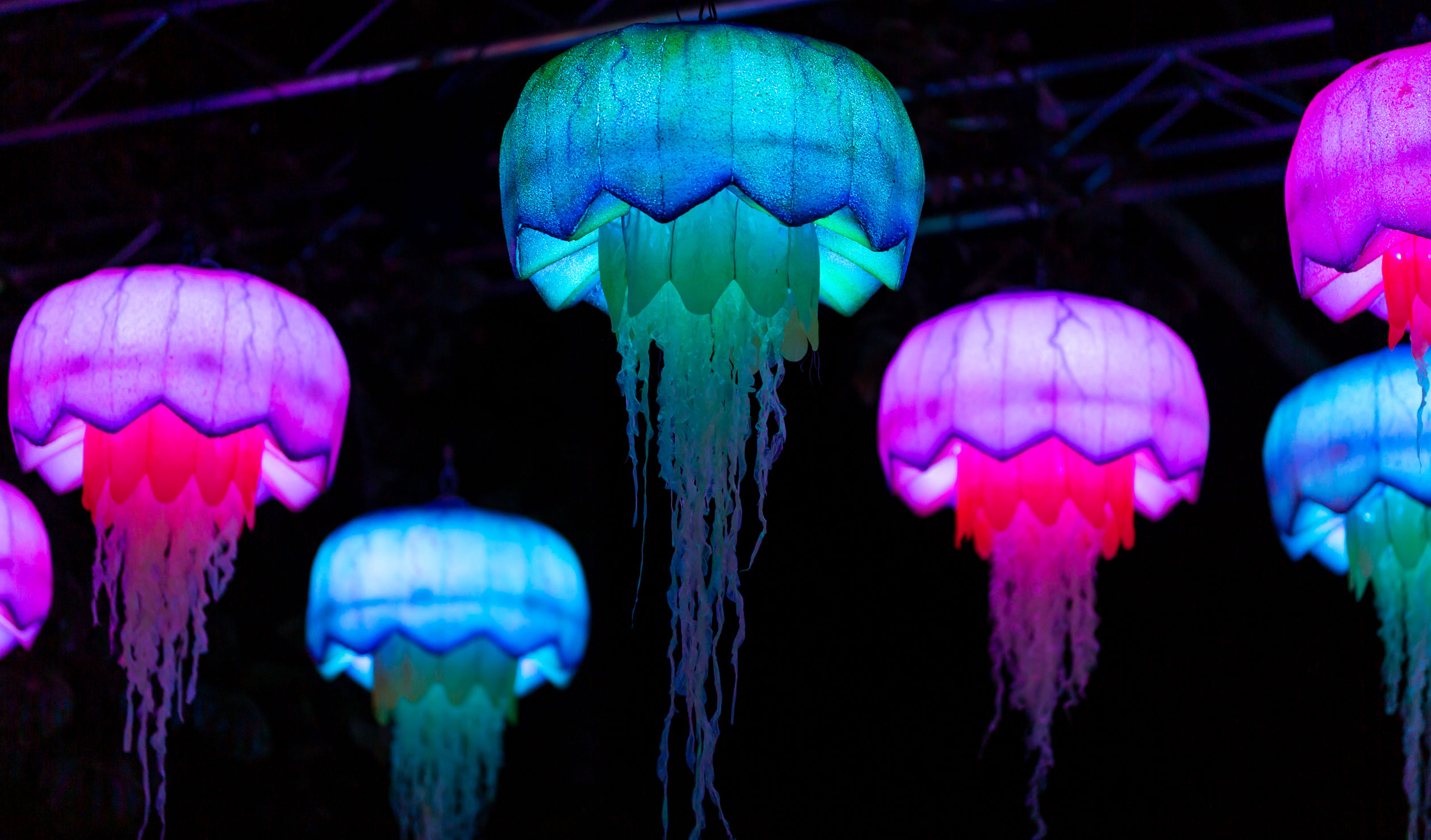 The other lanterns created by A Blanck Canvas for Light Creatures are two animatronic 6m giant pandas (on the zoo’s central lawn), two 6m giraffes (kneeling down at the entrance), and a magical underwater world featuring 10 colour-changing and moving jellyfish.

Adelaide-based Monkeystack has also designed and installed two installations, one of which enables visitors to interact with creatures on a large screen, while the other features shoals of fish that disperse and then regroup as people move through them.

Coloured lighting around the zoo and water-based theatrical haze (in the South-East Asia walkway) also add to the atmosphere of Light Creatures, which continues until August 1.

NOTE: Due to the forecast extreme weather conditions, Adelaide Zoo has cancelled the July 15 and 16 sessions of Light Creatures. Tickets for other sessions can be booked on the Adelaide Zoo website. 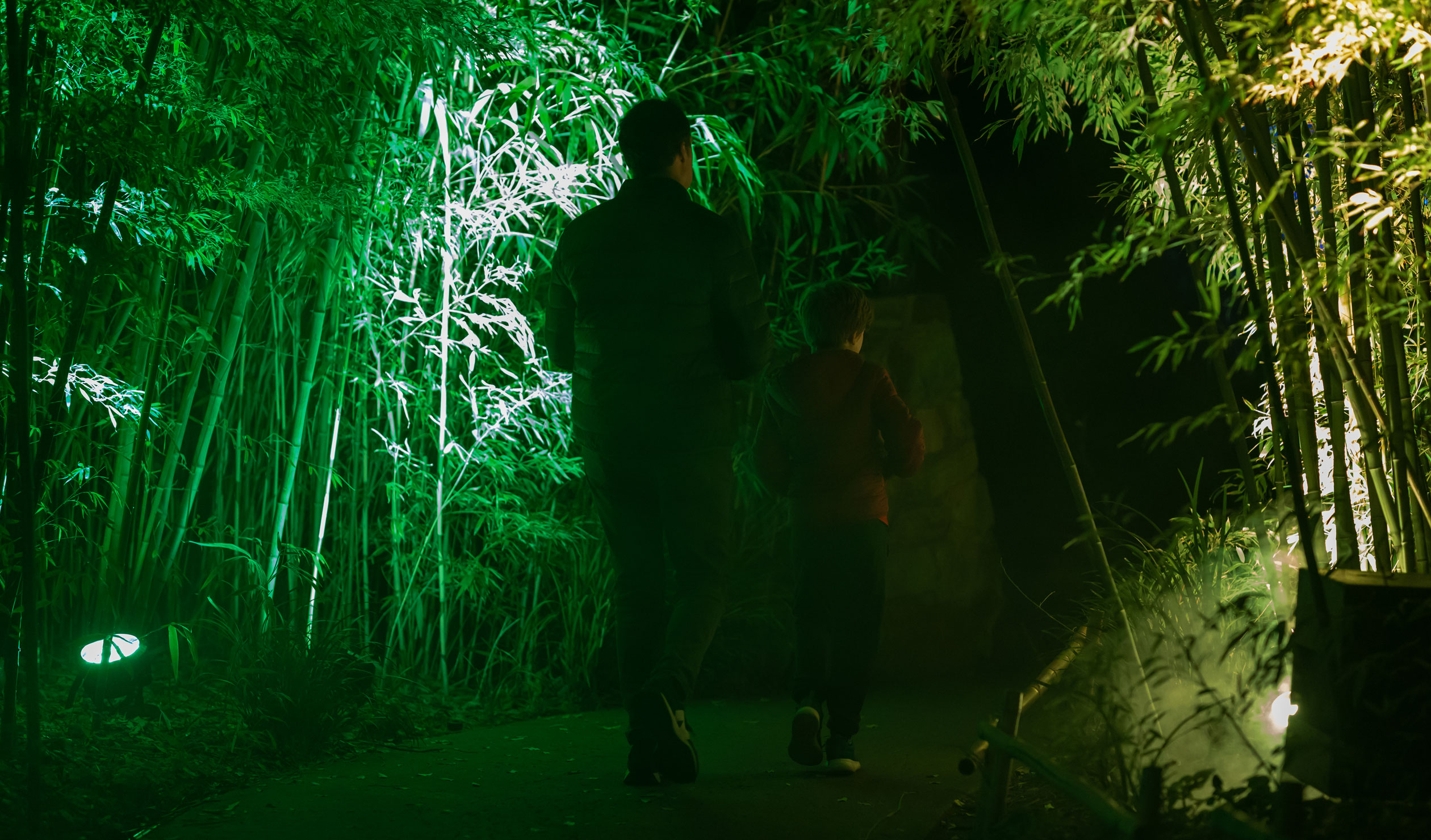 Visitors walk along an illuminated pathway at Adelaide Zoo. Photo: Frankie the Creative