The sink and washing machine are still there, but Carly Snoswell’s home studio is not your typical laundry. Since she and her partner, fellow artist Luke Wilcox, moved into this mid-century home in Adelaide’s southern suburbs one year ago, it’s become a hive of colour and creation.

“I really loved this space,” she says, looking out at the citrus trees and chicken coop just beyond the window. “I loved the tiles, and the light in here is really nice.”

Reclaiming a space typically associated with domestic labour seems fitting, given how much of Snoswell’s creative practice involves unpicking the often-gendered lines between “art” and “craft” – embracing forms of making that have typically been associated with women and the home. For Snoswell, who also makes all her own garments, the work that ends up on a gallery wall, and that which ends up around the house or worn on her person, all come from a similar place.

“I’m pretty interested in how those two practices can merge,” she says. “I guess I’ve been doing a lot of patch-working in my artwork more recently, and in things like my curtains and clothing. It all slowly starts to blend into each other.” 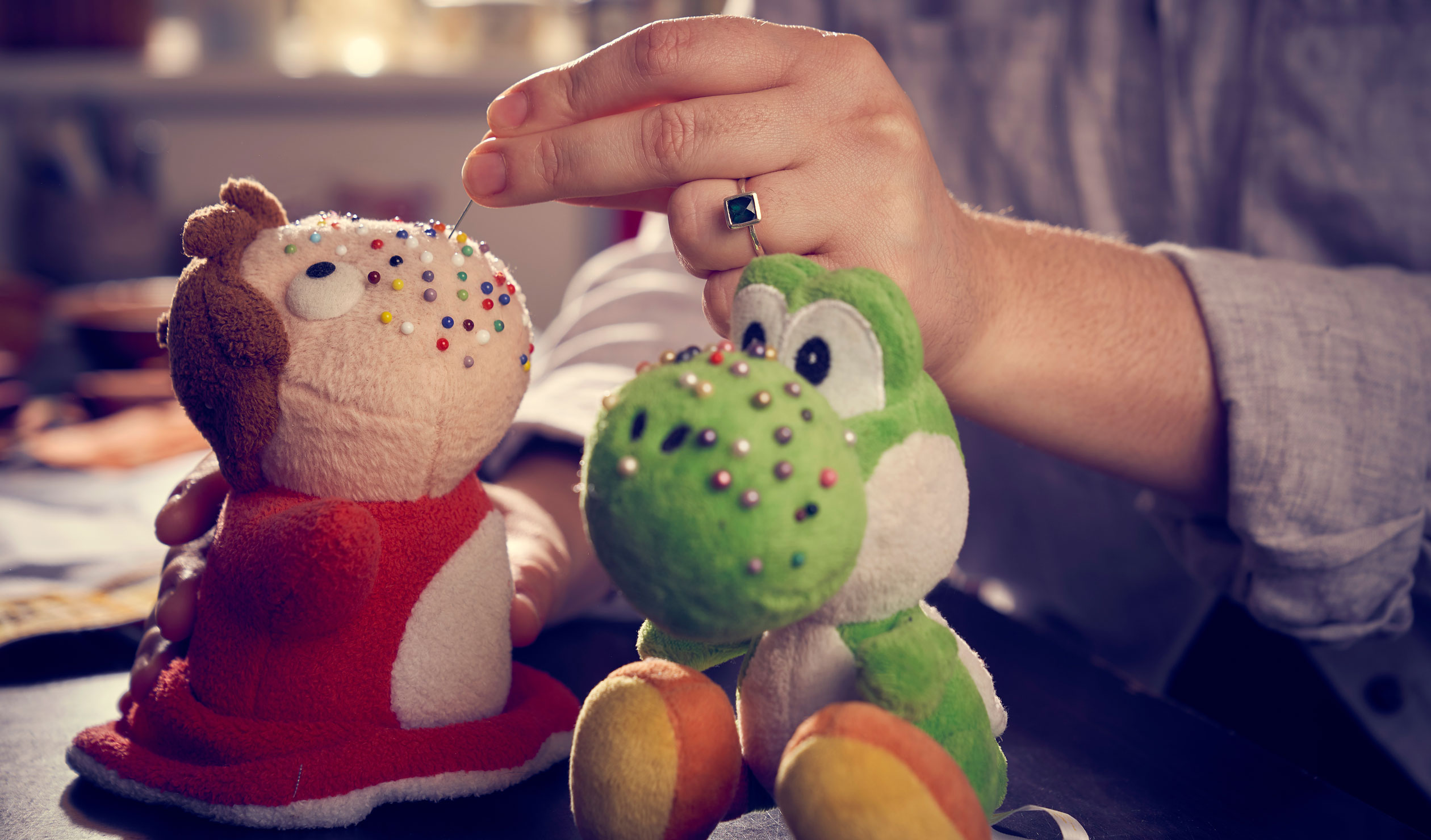 Behind her desk is a shelf stacked high with dozens of jars, housing what can only be described as a lifetime’s supply of sequins – a rainbow of colour, refracted and bottled. Snoswell’s sequin habit moved beyond raiding the local Spotlight five years ago, when another artist sent her a link to an Adelaide auction house.

“Obviously a craft store had shut down and they were getting rid of their stock – they were selling boxes of these containers, [and] I was winning boxes of stuff for five bucks. Over the course of a few of those auctions I got all of this stuff… and more that’s not here!”

Alongside these liquidated treasures, various sewing machines, and a vintage wooden loom among other op shop finds, are some more personal additions; as word of Snoswell’s impressive sequin and fabric stores has spread through Adelaide’s arts community, her laundry has become a kind of deposit point for interesting offcuts and materials.

“I got this randomly in the mail last year,” she says, producing a small jar sent to her by a friend and fellow artist. It came with a note: “It says, ‘Dear Carly, these are my very best sequins. I’ve had them as long as I can remember, well over 30 years as evidenced by the Heinz baby food jar. I was always waiting for just the right work to use them in, but it never seemed right and now I know why. They were waiting for you’.” 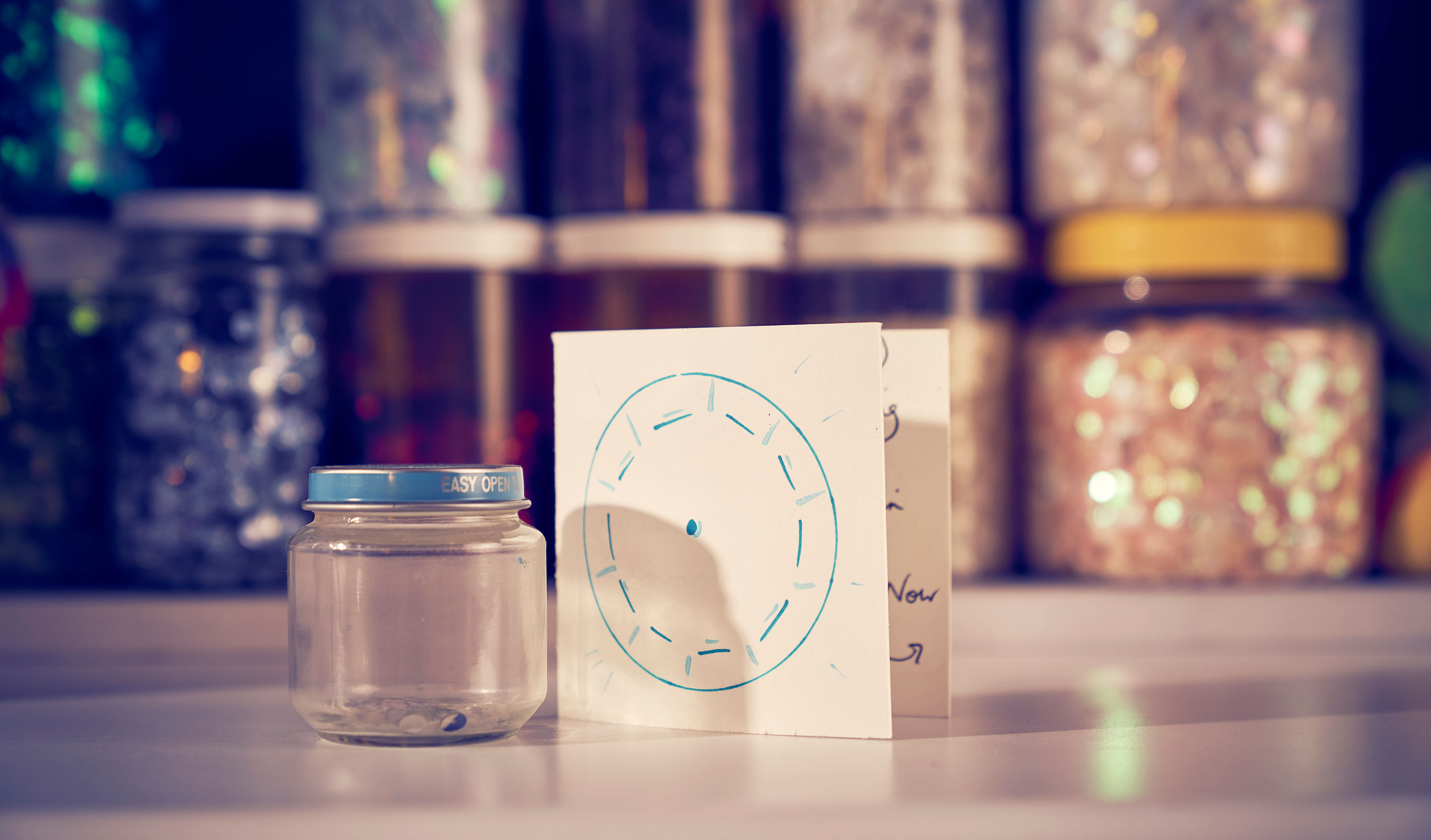 A jar of sequins gifted by a friend and fellow artist. Photo: Aubrey Jonsson

Snoswell appreciates how much meaning can be invested into objects, having spent years exploring the intersection of art and fandom, from banner-making football fans to her own crocheted and embroidered work celebrating everything from Port Power to Beyoncé.

“It says, ‘I love you more than this’,” she says, unfurling a metre-long banner she recently made. “That’s something I’ve been interested in: the language around devotion, and want, and desperation, and that’s what I’ve been working on more recently.”

Snoswell’s day job as a youth arts worker for the City of Onkaparinga has also seen her working with teens who are unabashed in their devotion to the pop culture that speaks to them. 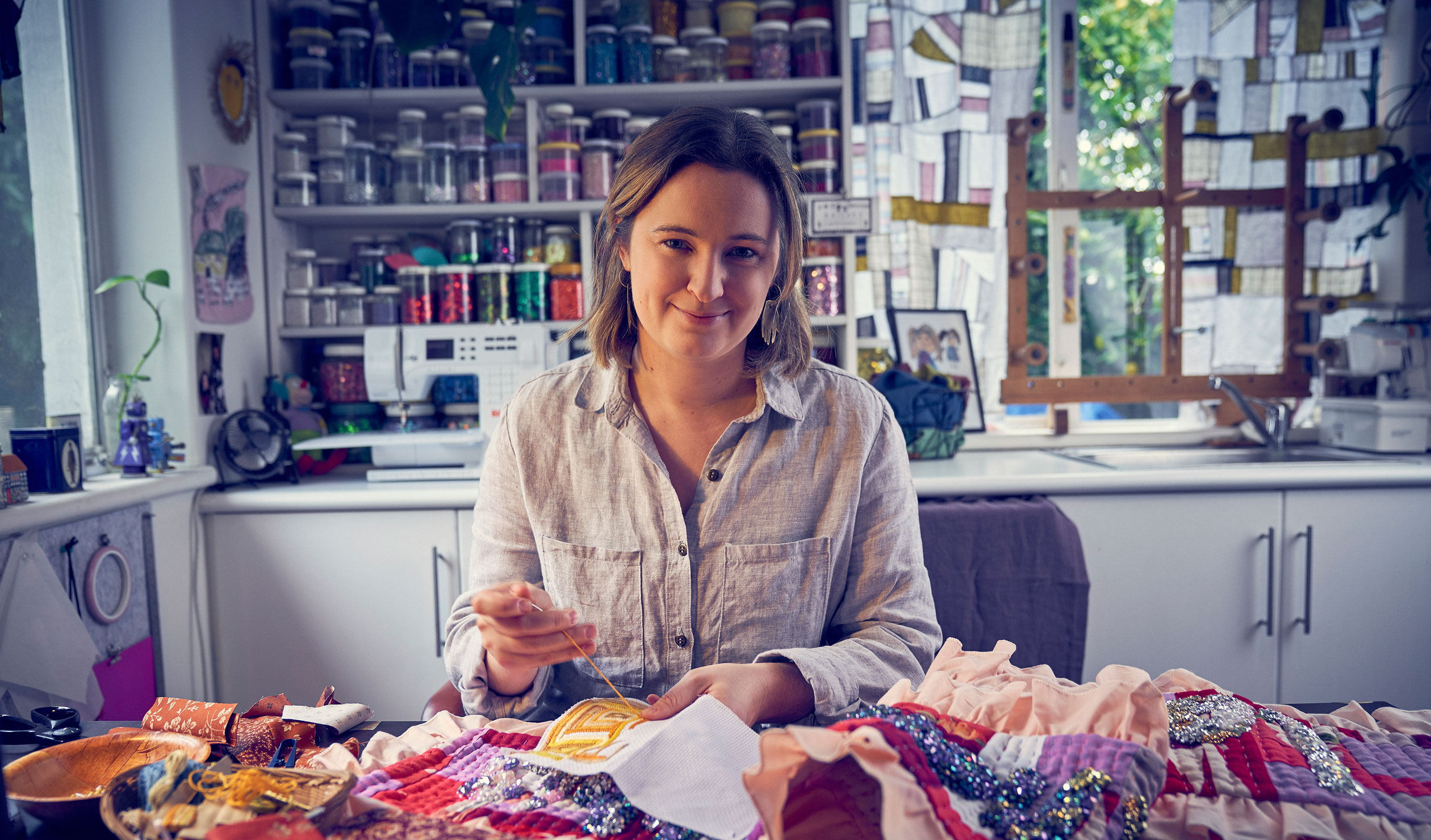 Around the space is evidence of Snoswell’s own fandom; plush figures of cartoon characters Yoshie and Ponyo, currently being used as pin cushions, various bits of Simpsons paraphernalia, and artwork by her stepdaughters – whom she is obviously a big fan of.

But her greatest passion is for making, and despite efforts to contain her work to the laundry, sometimes it inevitably escapes – as evidenced by the breadcrumb trail of sequins that often follows her to other parts of the house.

“When I’m doing these works where I have a palette of beads or sequins that I’m using and I’ve just got jars all over the place,” she says of the studio’s less orderly moments. “And I want to keep them out so I can remember which ones I’m using… then those things slowly move out to the lounge room, while I’m watching TV or playing with kids, and there’s just beads everywhere.”

Eventually, Snoswell and Wilcox plan to build a new studio space on the property that can better contain both of their practices. But, for now, the laundry has everything she needs. 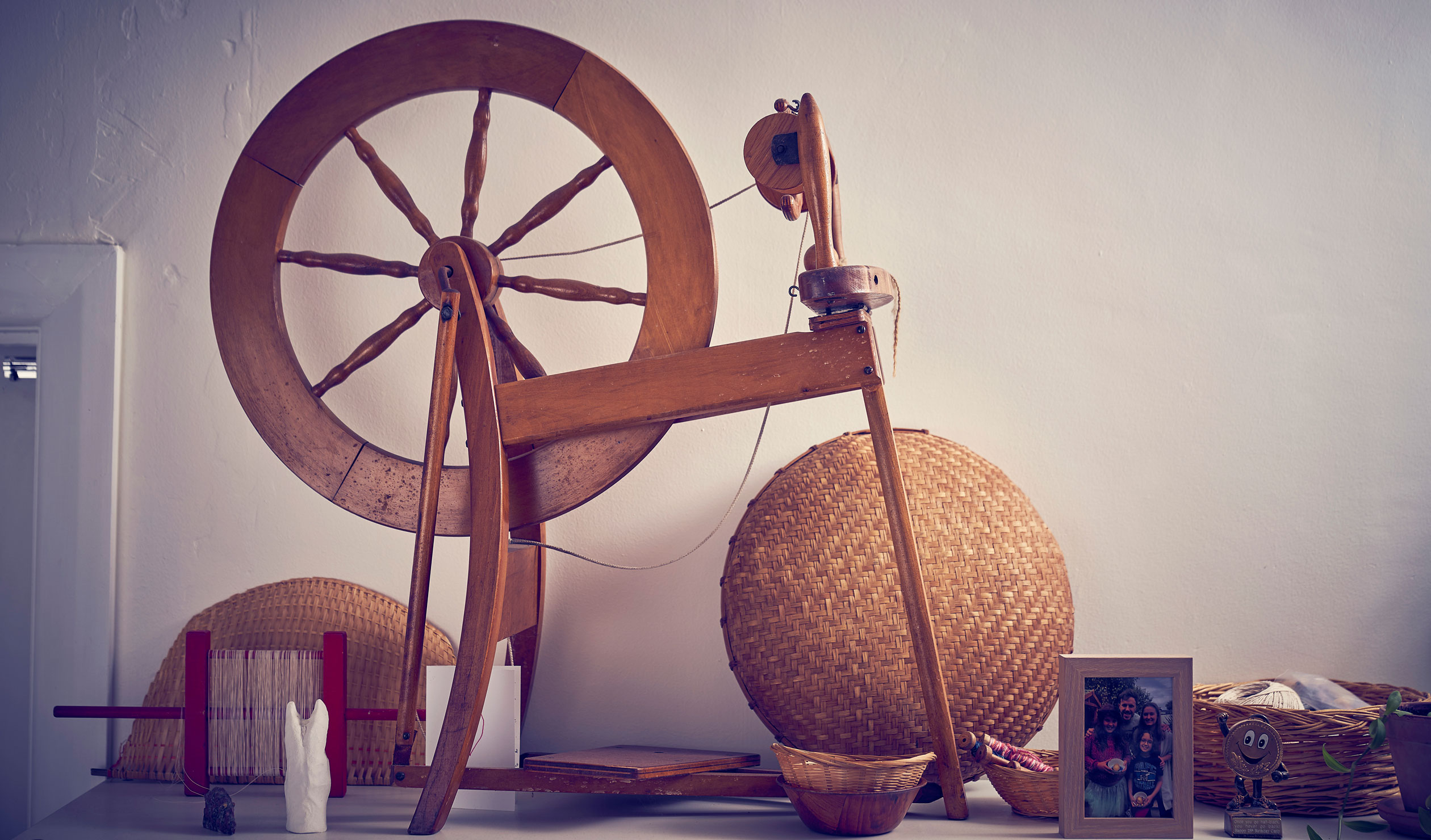 Carly Snoswell is the Art Gallery of SA’s Studio artist until May 16. Read more about her artistic practice on her website.

In the Studio is a new regular series presented by InReview in partnership with not-for-profit organisation Guildhouse. The series will share interesting stories about South Australian visual artists, craftspeople and designers, offering insight into their artistic practices and a behind-the-scenes look at their studios or work spaces. Read our previous story about artist and Gray Street Workshop co-founder Catherine Truman here.

False economy: when one bookkeeper costs more than a team