Craige Andrae is a man on a mission. His pocket-sized art space, Southwest Contemporary, has been tasked with reigniting the power and passion of Adelaide’s ’80s and ’90s period, when, from his experience, art was the great social attractor.

“Everyone turned up to openings at the Contemporary Art Centre, The Experimental Art Foundation and a multitude of alternative art spaces around town.

“You’d get young artists straight out of art school mixing with senior artists who had been doing it for 30 or 40 years. Now that diversity’s not there.”

Perhaps it’s a consequence of a proliferation of artist collectives, and a brace of preppy independent art galleries with their discrete demographics fed by turbo-charged social platforms. Nostalgia for the days when a CAC opening was the place for everyone to be, may be just that. But the kind of community Andrae has in mind, and believes Adelaide needs, is one that is engaged with artists’ interrogation of art practice.

On the basis of what Bertolt Brecht believed, that “the means must be asked what the end is”, Andrae believes that the commitment of mid-career artists around town to work through the uncertain Pomo period, and come out the other side still making art which matters, is a legacy that all generations of artist and audiences can share.

The launch pad for Southwest Contemporary’s series of projects has been artists who have not only been actively working since the ’80s and ’90s, but who continue, as Andrae sees it, “to challenge and inspire”. The problem is that “there isn’t much opportunity for these artists. You have to find some kind of reason to keep exhibiting.”

The solution, Andrae believes, is it to create some kind of acknowledgement in the form of an audience. To this end, SWC has generated a series of “Projects”. 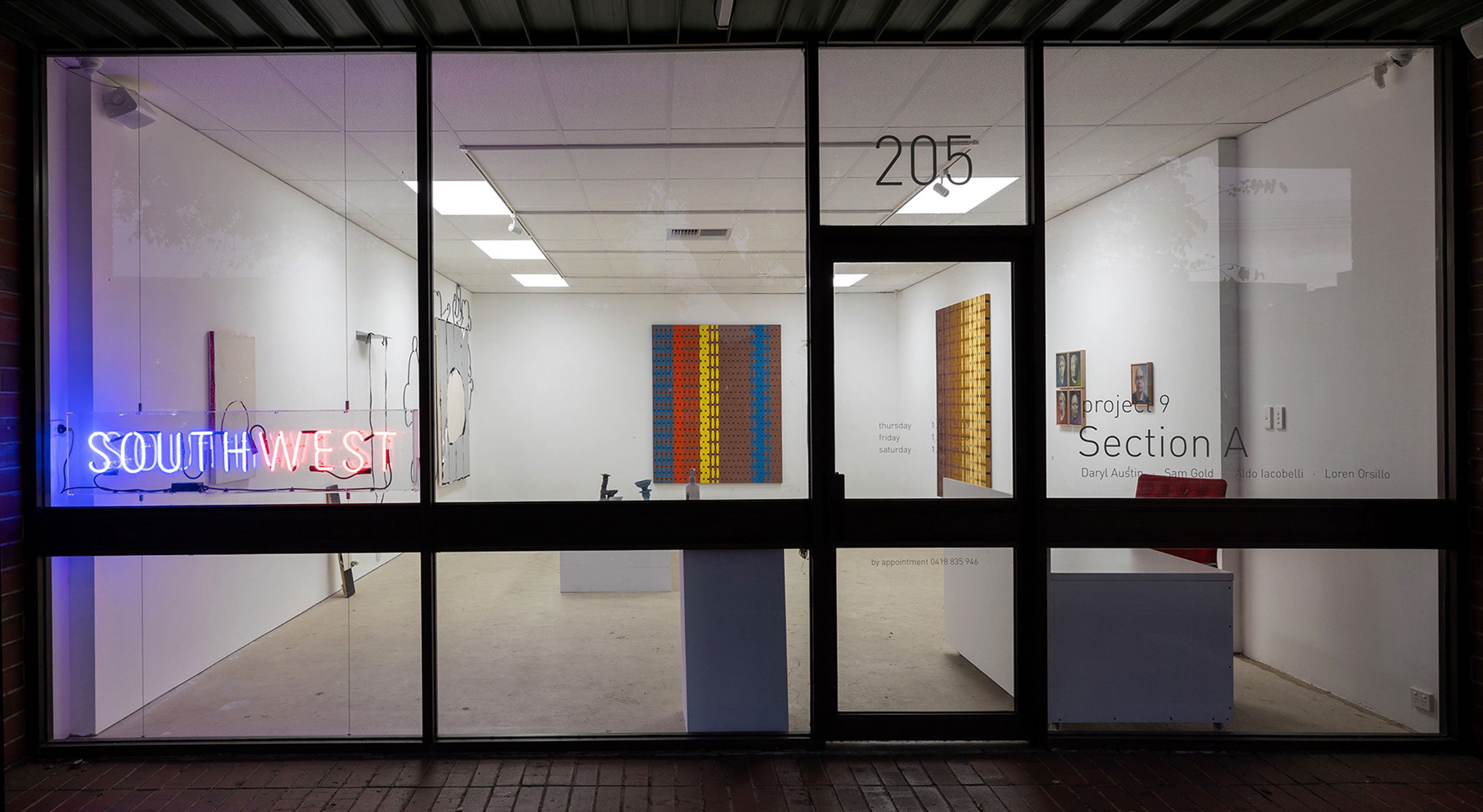 Given that the SWC “white cube” is a compressed space, each project offers a wrap-around experience on entry. The previous project (Project 8) was less wrap and more wallpaper, with curator Bronia Iwanczak’s selection of artists’ responses to pandemic coming on like a sound wall; shouting and whispering. It was a multi-track cerebral overload with feedback reverbs pounding on the brain, trying to get in. Unforgettable.

Project 9 is, by comparison, a reflecting pool of comparative practices. Background briefing time: Andrae has been supported in his role as director of SWC by creative associates, a strong line-up of talent and experience comprising Anton Hart, Andy Petrusevics, Louise Haselton, Nic Folland and Bronia Iwanczak.

For Project 9, Haselton asked established artists Aldo Iacobelli and Daryl Austin to consider showing work alongside an emerging artist – respectively, Loren Orsillo and Sam Gold. This principle of selection addressed a priority in SWC’s plans to broaden its community through inter-generational exchanges.

To see one of Iacobelli’s “woven canvases” of the ’90s up on the walls again is a treat – and a pushback to a mindset that we don’t want to look at “older” work, from an artist’s studio, is a nonsense. When criss-crossing to Orsillo’s assemblages of carefully calibrated, down-at-heels propositions, the contrast in mood and methodologies is stark. Considering that Iacobelli’s patterns were inspired by mid-20th-century floor-mat designs, the association with Orsillo is serendipitous. Both artists display an appreciation of elements to be found in everyday things. Orsillo’s free-form association with found or industrial materials contrasts with Iacobelli’s disciplined exercises in weaving paint but there is a shared sense of the mock-heroic in the manner in which ordinariness is honoured. 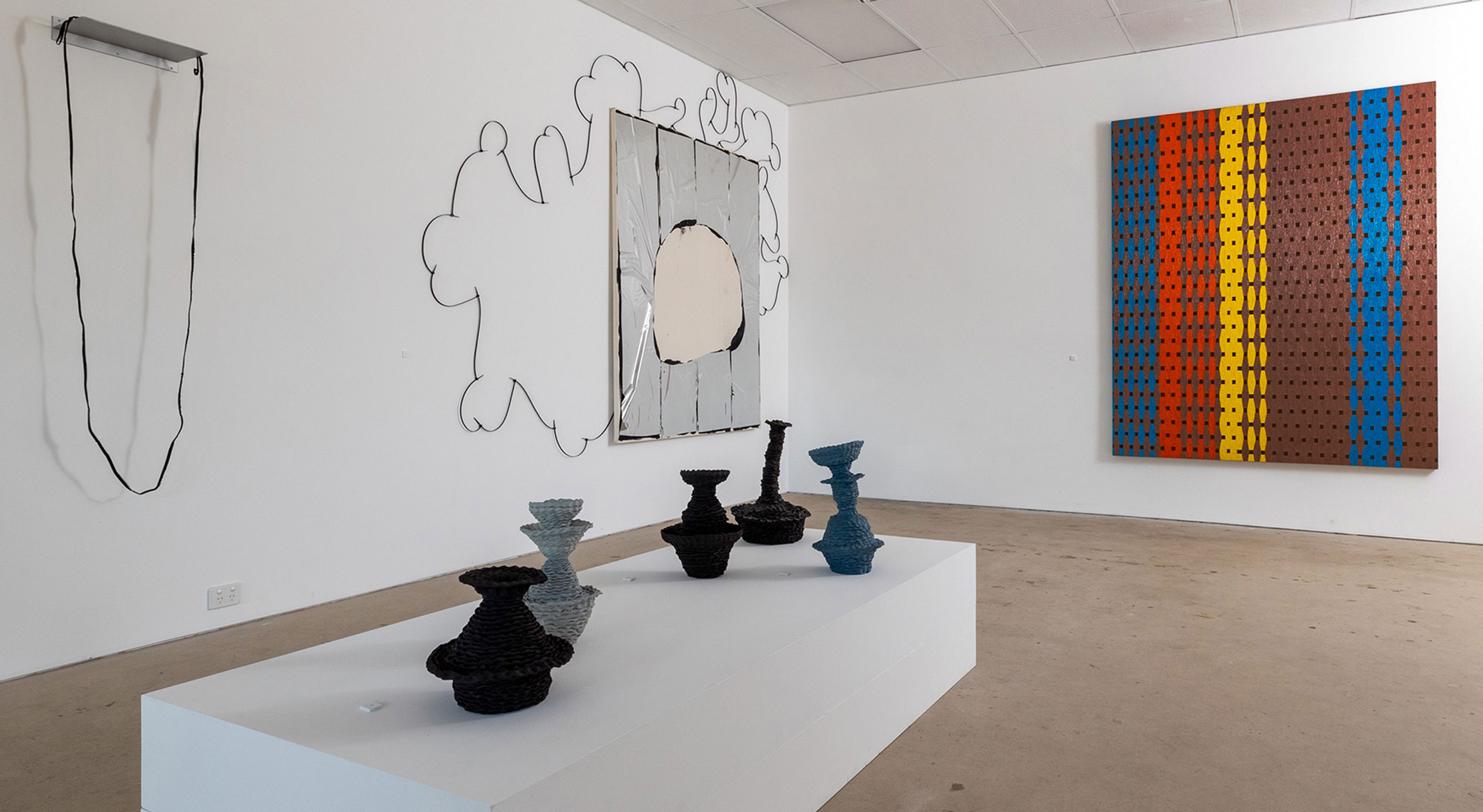 Austin’s self-portrait alongside a quartet of bashed-in classical busts may imply a “why them not me” reading. The artist says that disfigurement in these nose-less busts references statue busting (iconoclasm) and also COVID-induced anosmia (loss of smell). Gold’s stoneware vessels would appear to be amplifying some classical world subtexts. But the relationship between each artist’s approach is more interesting and complex.

The hallmark of Austin’s impeccable modelling technique is a faceted skin of chisel-like planes, created by the kind of touch that only years of studio practice can finesse. Gold’s hand-built forms, carrying the imprint of repeated squeezing, communicate a similar pleasure in building an image through repetitive gestures. Austin sees commonality in tactility. Gold recognises this as an “organic sensibility”.

The Project 9 exhibition is an indication of how Andrae envisages SWC travelling – not as a “gallery”, but more a space, or an entity, where different things, maybe even art, happen. A lot of metaphors are getting thrown around to capture this sense of a “not quite a gallery” space. Take-away convenience store. Altered state. Maybe that kid up the back of the bus.

My preference is for some kind of voice – an urban haiku where unexpected things mix and, according to Basho, “The squid seller’s call / Mingles with the voice of the cuckoo”.