The 2021 Adelaide//International is the final iteration in a three-year Samstag Museum of Art project developed for the Adelaide Festival to explore notions of the past, present and future.

Prominent contemporary artists from Australia and overseas have been selected to reflect current ideas and concepts which are prevalent across national and international art. While previous iterations have explored ideas of the past and the present, fittingly, the 2021 edition is very much looking towards the future.

Over the last three years, all of the Adelaide//Internationals have shared a contemporary curatorial point of view that, regardless of the time frame being explored ­– whether it’s the past, present or future – there is no real way of changing the fact we’re experiencing something in the present.

“Rather than looking at artists whose work makes grand predictions or imagined utopias, we wanted to look at practices where the thread running through them was about process and actions that are carrying us forward,” says Samstag curator Gillian Brown.

“It’s about future-making happening in the present.” 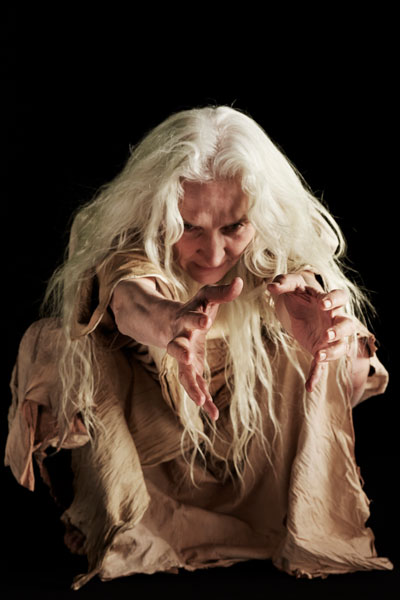 The starting point for the 2021 curatorial framework was the work Tremble, Tremble, by Irish artist Jesse Jones. Originally produced in 2017 for the Irish Pavilion of the 57th Venice Biennale, the work has since undergone a number of site-specific adaptations, in this instance for Australian audiences.

It has not been shown in Australia before, and Brown feels it embodies the thread running through all three iterations of the Adelaide//International – an openness of looking at existing work with a new lens.

Created during a time when Ireland was going through legislative change, Tremble, Tremble looks at how collective action and ritual can bring about changes and how we write these changes into laws. The title comes from the 1970s Italian wages-for-housework movement, during which women chanted, “Tremate, tremate, le streghe sono tornate!” (Tremble, tremble, the witches have returned!).

From Jones’s work, Brown was able to look for similar threads in the practice of other artists, such as Fayen d’Evie, a multi-disciplinary artist from regional Victoria. The vision-impaired artist presents Endnote: The Ethical Handling of Empty Spaces, which incorporates image, text, sound and movement, and explores how we might communicate stories to future audiences who have different points of reference.

Carrying on from her work in The National 2019, where she engraved stories into granite, the artist has created a new gestural sign language and worked with a graphic designer to turn it into a font. The Adelaide//International features screenprints of the typography, as well as a performance piece d’Evie developed with choreographer Benjamin Hancock translating the gestural typography into movement.

While d’Evie’s work is inspired by ancient script, she has developed a language of the future and potentially new ways to communicate stories to a wide range of audiences.

This leads into the work of Australian artist James Tylor, whose practice is concerned with how we document history and archive stories. The Darkness of Enlightenment includes photographs depicting Kaurna land as well as contemporary Kaurna objects made according to historical research. Through this body of work, Tylor is investigating the mistakes, mistranslations and loss of knowledge resulting from European attempts to document Kaurna culture.

Showing at the SASA Gallery is Taloi Havini’s video work Tsomi wan-bel, which focuses on how we might be coding the future in terms of laws and language. The work references acknowledgment and reconciliation, with footage of people participating in a traditional mediation ceremony in Bougainville, where she was born.

Halvini doesn’t depict the ceremony itself, but rather the peripheral conversations and reactions of the village before, after and during the ceremony. The work is largely untranslated, so the audience must watch, listen and feel to navigate through the work.

While it’s difficult to predict the future, it is possible to influence how it might look, and by revisiting the past and coming to terms with the present we are able to look forward to what might be ahead. These artists all present different visions of the future but recognise process and action as a means to get there.

“There are some serious issues being explored by these artists, such as cultural erosion and bodily autonomy, but looking at change and process and the work that has to be done is a hopeful act,” explains Brown. “These artists wouldn’t be looking at these processes and actions if they didn’t believe there was change that could be made.”

Also featured as part of the Adelaide//International program are a number of artist talks and presentations during the west end opening weekend and beyond.

The 2021 Adelaide//International opens this Friday at Samstag Museum of Art and UniSA’s SASA Gallery and continues until April 1. Details of opening weekend events can be found here.