“It’s a very realistic staging of a 20-something share-house,” he says of the setting for Something Big, “and it’s quite funny because most of my furniture is making up the set at the moment.

“We’ve got my couch and my dining table and chairs, so I’m currently eating dinner off my coffee table at home, but such is the way of independent theatre in Adelaide… we sacrifice things for art,” he adds with a laugh.

Something Big, opening at Rumpus Theatre on June 2, is just the second work produced by CRAM Collective.

Reidy and fellow Flinders Drama Centre graduates Ren Williams, Aarod Vawser and Melissa Pullinger co-founded the independent company late last year to create opportunities for both themselves and other recent performing arts graduates, with their website explaining that CRAM stands for Create, Revive, Augment and Merge. Its bold aim is to make work that changes the audience experience and “redefines the Adelaide art scene”.

“There are some great artists here and we find that when these artists come together and we cram them in a room, they produce their best work in collaboration with others, so that’s what we’re all about.”

For its first production, New World Coming, CRAM assembled 12 artists from different disciplines to devise a piece of theatre in just five days that tackled the theme of climate change.

In contrast, Something Big is a scripted play by Melbourne-based playwright Anna Barnes that has never been staged before. Reidy – whose previous credits include assistant director on Theatre Republic plays The Bleeding Tree and Lines, and who will assistant direct the State Theatre show The Normal Heart later this year – is directing the dark comedy.

The play centres on three friends – Pia, Thomas and Julia, played by Williams, Vawser and Pullinger – who witness “a sudden horrific event” during a dinner party. At the same time, news breaks of a plane crash that has killed 200 people. Trying to make sense of what has happened and find clarity amid “jealousy, broken friendships and utter confusion”, the trio get together to re-live the events of the party.

“It’s about them processing a major event like that [the plane crash] while they also try to come to terms with something that happened quite close to home to them on the same night,” Reidy explains.

Without wanting to give away too much, he says the event close to home is something that changes the friends’ lives from that night on: “The play looks at crises and how we process and adapt in moments of crisis and trauma, and I think we’ve all kind of experienced some level of that in the past couple of years with COVID and how our lives have changed.” 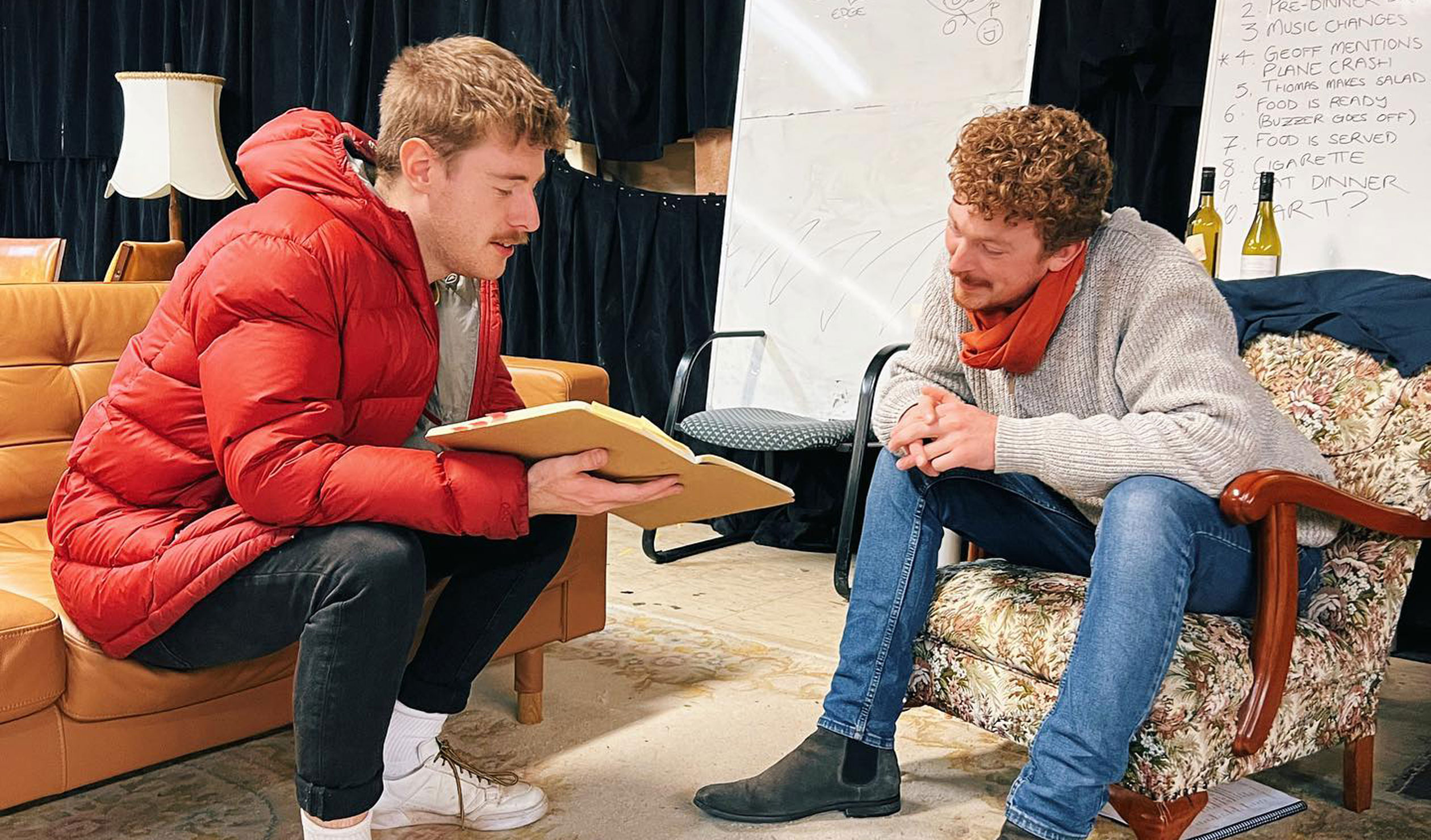 Connor Reidy and Aarod Vawser during rehearsals for Something Big.

The creative team for Something Big includes Kathryn Sproul as set and costume designer, Tom Kitney as lighting, sound and video designer, and Stephen Moylan as stage manager.

CRAM plans to have audience members on three sides of the stage in the intimate Rumpus Theatre, so viewers will get a slightly different perspective depending on where they are seated. The collective has also collaborated with Hartstone-Kitney Productions’ audio-visual arm Black Box Live to add a multi-media element to the show, with smartphone cameras capturing some of the live action which will then be projected behind the stage.

“So there’s some moments where they re-create the plane crash through paper airplanes and live cameras and they re-create the footage of what that crash might have been,” says Reidy, adding that Black Box Live has “all this amazing technology that can be completely run through our iPhones so we’re having fun devising and developing what that language is for our performance”.

Reidy, whose directing style involves collaborating with the actors and feeding off the energy they bring to a performance, says he and his CRAM co-founders are bonded by their love of theatre and haven’t hit any speed bumps in the process of working together so closely.

They are currently receiving support through the 2022 Helpmann Academy Creative Innovator Program, and hope to present two or three different works each year.

“Those works will be everything from a main-stage performance like this [Something Big] to maybe a much more intimate reading of an emerging playwright’s text or maybe even a short film.

“The four of us are all really passionate about creating a community and seeing what other emerging artists are out there and what happens when the CRAM Collective teams up with them and what work might come from those collaborations.”

CRAM Collective will present the world premiere of Something Big at Rumpus Theatre from June 2-12.