“Piccaninnie Ponds is a system of sinkholes on South Australia’s Limestone Coast, just south of Mt Gambier,” playwright Caleb Lewis explains in the program notes of State Theatre’s latest production. It is where his father, a dive instructor, took him when he was a child.

As Lewis remembers it, after telling his kids about the dangers and deaths associated with the “Pics”, their dad put on his wet suit and mask and slipped into the deep waters to explore, leaving them wondering whether he would ever return.

Cathedral is the name of the most majestic of the Pics caves – as Lewis says, it is a place of crystal-clear water, yawning chasms and “filled with godlight”. It is central to the theme of his play that the Cathedral is both a sanctuary and inspiration and a treacherous death trap, both an exultant high and a lethal low.

It is a metaphor for how we manage the extremities in our lives, for what draws us to danger and what guides our choices. “Why do some of us sink when others swim?” the playwright asks.

Clay, his central character, is a young man from coastal South Australia who lives close to the edge in many ways. Vividly narrated by Nathan O’Keefe, his is a life of disruptions and insecurities, but also of abiding constancy. Born as the only surviving twin (his brother Moss was stillborn), he bursts into the world gasping for oxygen.

While Clay is still a child, his violent father makes an abrupt and permanent departure after being horsewhipped by his mother’s father – the larger-than-life Pop, a World War II hero who miraculously survived a bomber aircraft crash in the Danube. It is Pop who parents Clay after his mother mysteriously goes missing in the Pics – one of the many wraiths floating in the Cathedral never to be found again.

It is also Pop who teaches Clay to swim and to learn to love the coastal life: bodysurfing, sitting on the bottom of the swimming pool holding their breath ”until spots swam in our eyes”. Lewis captures an idyllic, intensely Australian portrait of 30 years ago. But Clay is soon restless and his fascination for diving takes him first to Thailand and then to Aberdeen, where he becomes a highly-paid industrial specialist. 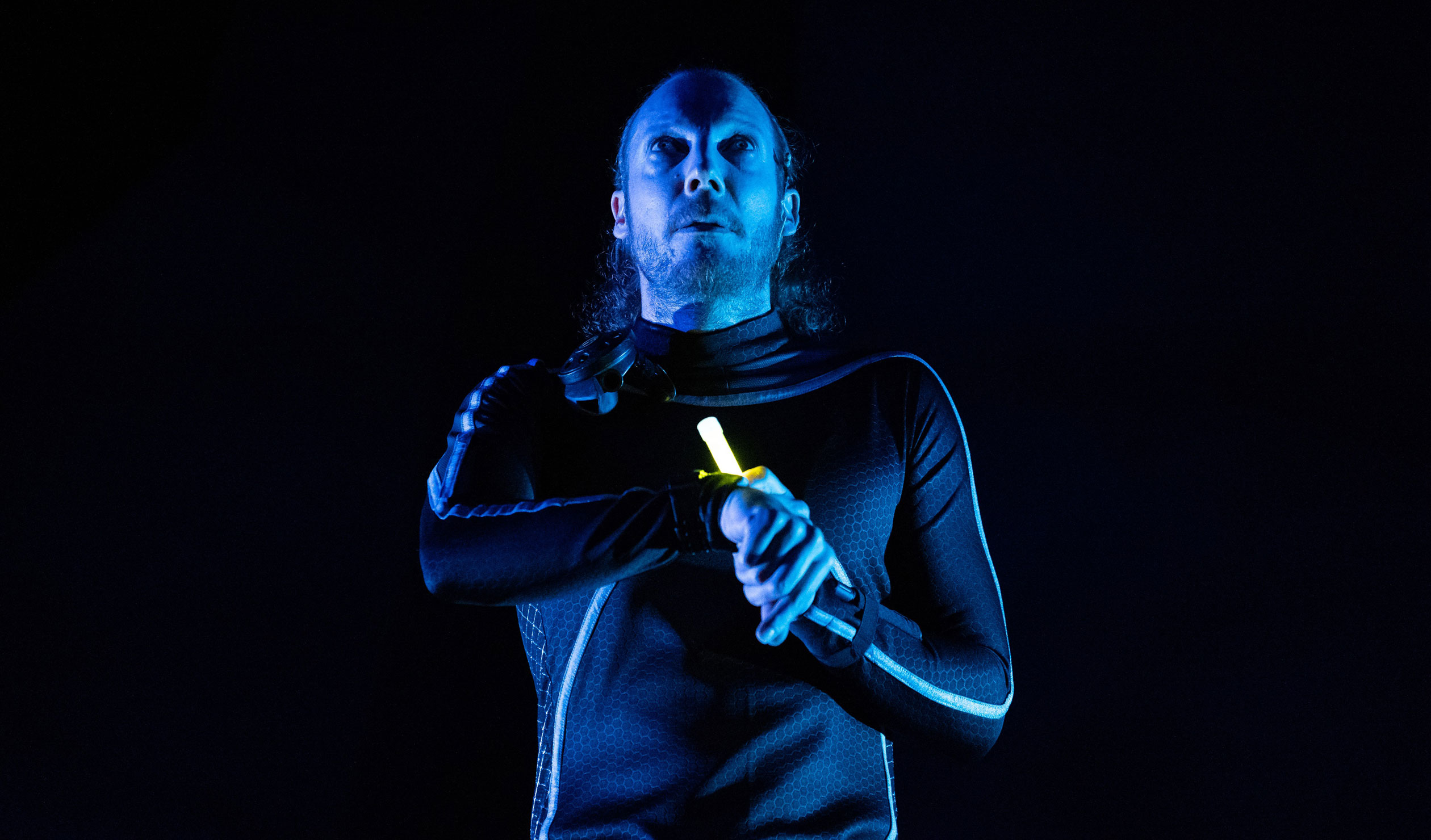 Director Shannon Rush ably contains and focuses this engaging narrative by always keeping us connected to the emotional and numinous implications of Lewis’s layered and meditative text.

Kathryn Sproul’s design features a boardwalk pier with heavy pilings in front of an abstracted limestone monolith, with a narrow vertical entrance that is a harbinger of both birth and doom. Mark Oakley’s sparing lighting re-creates the shadows, deceptions and sudden illuminations of the undersea world, and his understated photographic projections during Clay’s final descent into the Cathedral enhance the reality of the quest.

Also enveloping the stage is Andrew Howard’s subtly ubiquitous sub-woofer score – a constant rhythm of the surf, both brooding and commanding, interspersed with almost subliminal melodic reveries beckoning Clay further into the unknown. For the mayday scenes, the chaotic volume of the radio static and garbled communication ramps up the tension and anxiety.

A variety of characters are voiced by off-stage actors – notably Anna Steen as Clay’s girlfriend, Chris Pitman as the booming Scotsman Jock, Annabel Matheson as Jess, and Rory Walker as Will and Ted.

But it is the central solo performance by Nathan O’Keefe which ensures the success of this terrific production. His easy delivery of Lewis’s often beautifully cadenced (and expertly detailed) text brings a vernacular warmth that makes it even more poetic and compelling. From the geological history of the coast in the introduction to the emotional and mythic reckonings of the final scenes, O’Keefe’s performance is spot-on; never obvious, or mannered, or overwrought. His Clay is the key to the work.

Cathedral is surely a highlight of State’s 2022 season. It is among the best and most assured of Lewis’s works to date and deserves to tour widely. It has all the markings of a South Australian classic.

Cathedral ­– presented by State Theatre Company South Australia and Country Arts SA in association with Flinders University – is playing in the Space Theatre until May 21 (details here), after which it will embark on a regional tour.