For 60 years, Who’s Afraid of Virginia Woolf? has shocked audiences with its vitriolic portrait of marriage. First performed on Broadway in 1962, then adapted for the screen by Mike Nichols in the 1966 classic film starring Elizabeth Taylor and Richard Burton, the play’s bitter power has been only mildly diluted by the intervening decades.

Middle-aged married couple George (Jimi Bani from Mabo) and Martha (Susan Prior from Puberty Blues and Aftertaste) stumble home from a faculty party hosted by Martha’s father, the university president, who also happens to be George’s boss. Despite it being two o’clock in the morning, their night is far from over. Martha has invited guests: Nick (Rashidi Edward from State Theatre’s Hibernation), a young, newly employed professor, and his wife, Honey (Juanita Navas-Nguyen).

From the outset, the situation is brutal. Martha and George’s bickering intensifies as they attempt to wound and humiliate each other in increasingly cruel and inventive ways. Nick and Honey are swiftly drawn into the fray, George and Martha manipulating and exploiting the younger couple as each tries to assert their own version of the story of their disintegrating marriage.

The booze-fuelled evening wears on and the games become increasingly malicious, the evening devolving into a claustrophobic nightmare as each character’s mask is peeled away and secrets stripped bare.

Given the play’s age, it’s understandable some of the turns of phrase and social mores feel outdated in the light of more modern sensibilities. Since Albee’s estate still retains copyright, the original script for the play has largely remained unchanged.

In place of radical revisions to the dialogue, Harvey has instead used colour-conscious casting to give the play contemporary relevance and heft. Traditionally, it has been staged with an all-white cast. In this production, Harvey’s clever casting choices and the retention of Australian accents has given the narrative a jolt of new energy and an extra level of meaning. 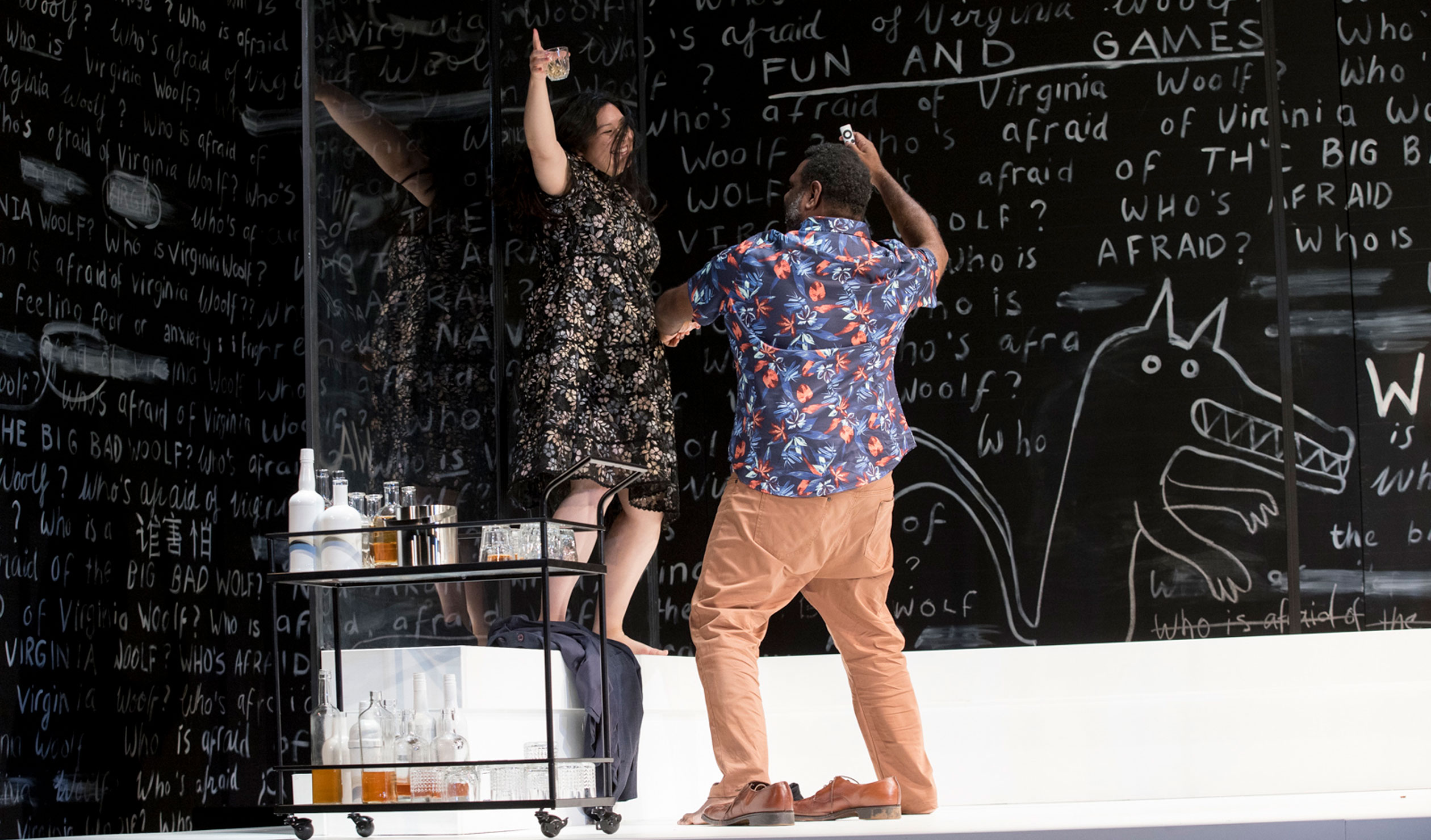 The disingenuously affable yet witheringly sharp George, a history professor constantly disrespected by both Martha and her father, is brilliantly played by Bani, an Indigenous actor from the Torres Strait. Nick and Honey are also played by actors of colour. Congolese-born Edward is delightfully natural as biology professor Nick, and Navas-Nguyen displays great potential. Prior’s mesmerisingly vicious Martha is the only white actor of the four, which cleverly emphasises the power dynamic at play by placing her father, the campus president, at the top of the university hierarchy.

Given this additional racial dynamic, Martha’s insults and language, particularly the use of “houseboy”, strikes much deeper than in the original. As does George’s discomfort with biologist Nick’s profession and its hidden potential for genetic whitewashing. The casting of an Indigenous actor in the role of a history academic also brings the dark side of Australia’s colonial legacy to the stage.

This astute selection of actors ingeniously deepens and escalates the tension, while also asking the audience to engage with the racism that remains embedded within Australian society at social, institutional and structural levels. 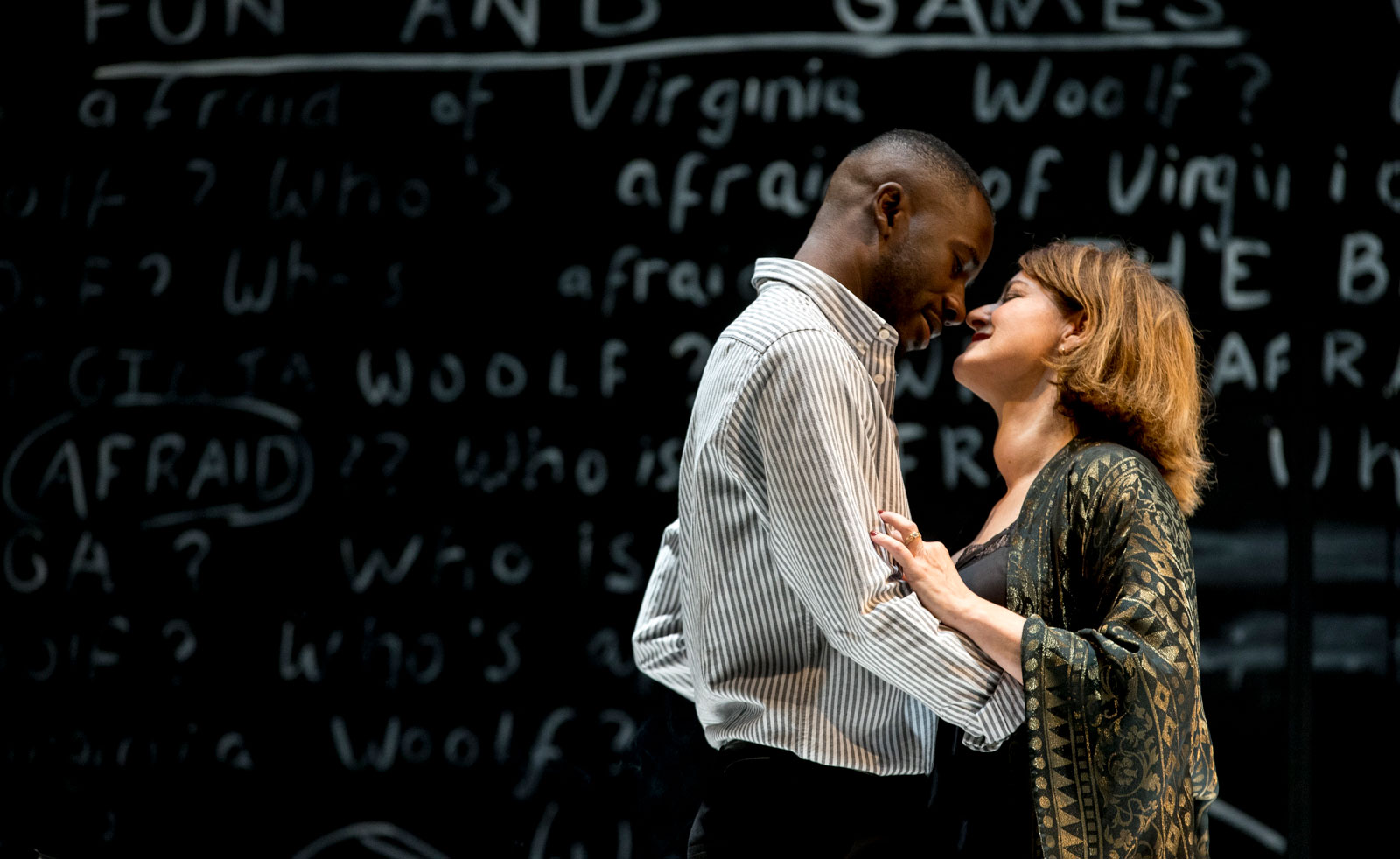 Harvey has clearly given a great deal of thought to the ramifications of these casting choices, and they indeed add considerable potency to certain aspects of the play. As does the remarkable set design by Ailsa Paterson.

While the action takes place in a living room, Paterson has shunned any semblance of realism. Instead, the curtain raises on a stark space enclosed by Perspex screens and a moat. The backdrop consists entirely of blackboards scrawled with chalk phrases riffing on the play’s title and Albee’s names for each of the three acts. As the action progresses, the screens and furniture are removed until all that remains is the sculptural centrepiece – a confronting artwork referenced in the first scene as George and Martha declare war. It’s a challenging set, deliberately distancing us from the actors as if we are scientific or academic observers.

The rapid-fire vitriol and stripping away of comfortable deceit builds to almost an unbearable level before the climax, the ramping tension heightened by Andrew Howard’s sparse yet potent percussive soundscape. At three and one quarter hours, this is a long play, but patience and attention will be amply rewarded in the intense final scene.

State Theatre SA is presenting Who’s Afraid of Virginia Woolf at the Dunstan Playhouse until February 6.