For the better part of two years, artists and creatives have found themselves back in their home cities. With time and creative energy to spare, there’s been a boom in new theatre companies.

Good Company Theatre is one of these freshly minted collectives, about to draw the curtain on its debut, original production, Hamlet in the Other Room.

The collective is made up of women and non-binary theatre-makers who are striving to re-frame the way audiences consider the theatrical cannon, as well as demonstrate what is possible for the future of Adelaide’s theatre scene.

Co-producers Kidaan Zelleke and Poppy Mee ­– who are both also actors – were part of the first iteration of the show, titled Rosencrantz and Guildenstern Are…, performed at the 2019 Adelaide Fringe.

“It sort of came about out of necessity and just wanting to work,” says Mee, reflecting on what initially brought the collective members together in 2019. “We were friends, and we had all graduated within a few years of each other from Adelaide College of the Arts and we wanted to test our creative capacities and put our training to use.”

Zelleke adds: “We came from a very eclectic training program, where we were able to try our hand at devising and writing and directing things, and kind of just being artistically involved in performance in different ways.”

The friends collaborated to write the script for Rosencrantz and Guildenstern Are… which followed the backstage discussions and dynamics of a group of actors performing Hamlet.

“Our original concept was this group of all-female and non-binary actors performing a production of Hamlet and debating the supposedly universal themes of the hero and the everyman character of Hamlet, and whether or not that served the script or characters,” says Mee.

Leading up to the 2019 performance, the cast discussed possibilities for the text if there had been more time for development.

“Someone was like, ‘Oh, what if we ran two shows at once? What if we had Hamlet in one room, and in the other a backstage show of a group of actors performing Hamlet but you only saw the dressing room? What if we had them happening concurrently and had the audience walking through?’,” says Zelleke. 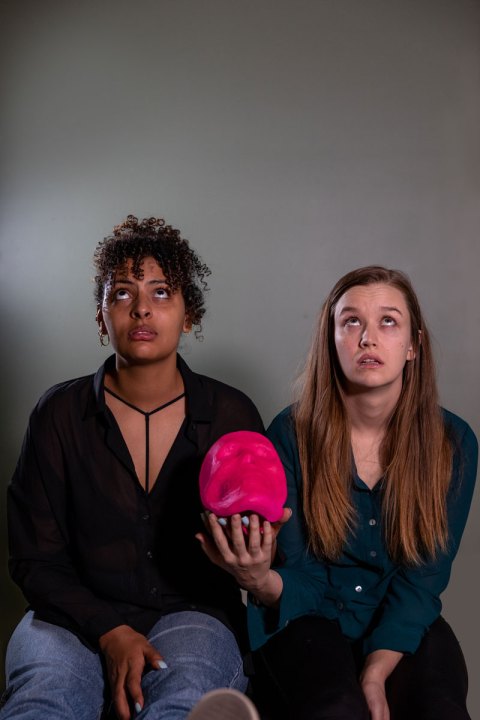 In early 2020, when the cast were all centralised in Adelaide again, a Facetime call from director Zola Allen during quarantine sparked the idea of revisiting that original script to see what could be made of it. This led to the formation of Good Company Theatre.

Now, the script has been developed into Hamlet in the Other Room: an immersive experience in which two performances – one of Hamlet, and one of the dressing room backstage – unfold at once.

This duality of the performance allows Good Company Theatre to explore theatrical and broader societal ideologies in an interconnected way. In this case, the all-female cast in the dressing room decides Shakespeare’s Hamlet no longer serves them and seeks to destroy it and create something new that does – this leads to a clash of ideas backstage, while the on-stage performance goes off the rails.

“We wanted to delve deeper into that notion of women’s place in history and the influences of patriarchy on even a group that are all female… the influence of the patriarchy is still very much in the room with them,” says Mee, a lead writer on the new production.  “We wanted to explore it in the context of a very patriarchal play like Shakespeare, and a very patriarchal setting like theatre, and see what it looks like when a group of women come together and decide to defy that history and those expectations.

“What we have collectively recognised is that a shift is taking place in our culture, and it is a shift that has been a long time coming and is very necessary. Just personally, in the last two or three years, I haven’t been a part of a production or a development that hasn’t wanted to tackle these themes about challenging the patriarchy and challenging systems of power that are in place, because theatre is really the vanguard of a lot of these ideas.

The cast for Hamlet in the Other Room comprises Chloe Willis, Ellen Graham, Erin Perrey, Evie Leonard, Katherine Sortini, Lucy Haas-Hennessy, and Mikayla Rudd, as well as Zelleke and Mee. It will be performed at Rumpus in Bowden, a venue the collective believes is ideal for this production.

“It is a theatre built inside an old warehouse,” says Mee. “They have been very generous in allowing us to have free rein over the entire building so we can create this world within a world, that perhaps a traditional theatre space may not allow us to do.

“It kind of goes along with the themes of the play, like we are remaking it to suit our context and to suit our needs. It’s really fun.”

We have come up with some really cool, innovative ways of making the show accessible to as many people as possible

The design concept is the result of a collaboration between Katherine Cooper and Bianka Kennedy.

“By the very nature of the audience being able to move between those spaces [the performance stage and the room backstage], that creates a really stark contrast between their experiences and the effect of the language,” says Mee.

“It gets really meta,” explains Zelleke. “It’s very minimalistic, both backstage and on-stage, some furniture, but more focusing on the abstracted element of what we are exploring in the show.”

Mee adds: “Also, everyone is playing an actor who is playing a character in Hamlet, so the costumes need to reflect both of those characters: the Hamlet character and their backstage persona. The design team have done an incredible job.”

Good Company Theatre has also been conscious of access barriers, working to ensure audiences of all abilities can engage with the production. An accessibility coordinator is part of the team, and there will also be an online presentation.

“There is definitely more we can do and we want to, and hopefully in future iterations of the show there will be more funds to make that happen,” says Zelleke. “In the meantime, we have come up with some really cool, innovative ways of making the show accessible to as many people as possible.”

For Good Company Theatre, this production offers an opportunity to set the tone for future projects. But, most of all, it sees Hamlet in the Other Room as an invitation for audiences to imagine how far theatre can progress if traditionalism is challenged.

Hamlet in the Other Room will be at Rumpus from November 30 until December 12.