This world premiere is a one-man show, following the character of Matt, played by James Smith. Matt is an aspiring actor from Adelaide who, in 2001, moves to New York to find stardom. While the city, and the world, are displaced after the fall of the Twin Towers, Matt’s relationship, career and dreams simultaneously unravel.

Steel’s script is a masterful feat of storytelling. The Adelaide playwright balances despair and comedy in equal measure, capturing the full spectrum of the unpredictable ­– and often unpalatable – human response in times of tragedy. The play is inspired by her experiences in New York, and a closeness to the narrative is evident in the finer details and nuances throughout the script: the smell of Ground Zero, dialogue through a payphone, references to the cultural landmarks of New York City. 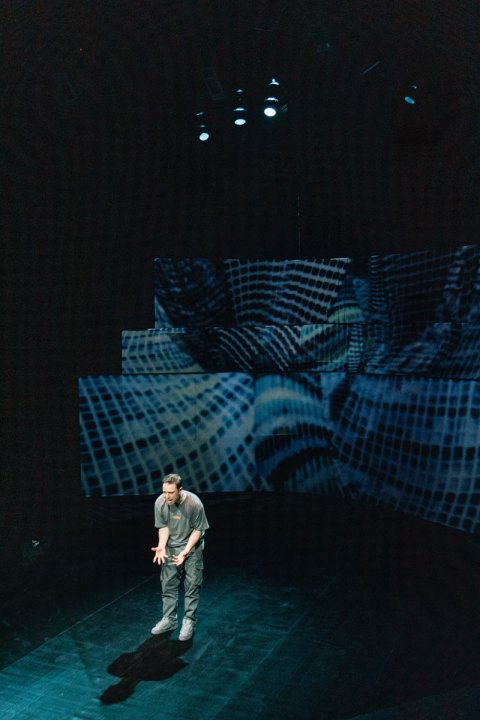 The story unfolds against a backdrop of scrolling projections on tiered screens. Photo: Thomas McCammon

The profundity of Steel’s writing is uncovered in Smith’s performance. While Matt is his central character – a bright-eyed, ambitious, and earnest 20-something who is immediately endearing to audiences – Smith portrays a total of 28 different roles. Under the direction of Corey McMahon, each is astoundingly distinct and well established.

Smith’s physicality, particularly through characterisations, makes the stage seem full of an eclectic group of people. His talents for comedic and dramatic delivery – often both in the same breath – has audience members captivated and deeply invested in Matt’s story.

Production designer Meg Wilson innovatively brings New York City to life through scrolling projections on tiered screens behind Smith. Each projection is based on drone images of New York, but these have been re-created to form busy, abstract designs that are, for the most part, gently in motion. The abstract quality of this work, and the otherwise bare stage, invites audiences to impart their own interpretation of New York onto the production, a powerful idea considering many were alive to see the city before and after 9/11.

Jason Sweeney’s score, with sustained tones and moving instrumental passages, beautifully aligns with the design and the emotional peaks and troughs of the production.

How Not to Make it in America doesn’t force tragedy on audiences; rather, it intertwines the events of 9/11 and Matt’s narrative, humanising and personalising a period of widespread heartbreak. The play is as much about an artist’s journey, dreams fuelled by love and passion, and the insatiable desire to make something of existence.

Enduring subtext about life’s fragility ties all the themes together, and culminates in the idea that, “if you find something you really love, you’ve just got to hold onto that” – a thought that resonates with audiences as they watch the play in the midst of a pandemic.

Theatre Republic is presenting How Not to Make it in America at the Space Theatre until November 20.

Read more about the background to the production in this CityMag interview with Emily Steel and James Smith.