Bianka Kennedy and Clara Solly-Slade formed Kinetik Collective at the start of this year with the aim of creating theatre in a new way: one grounded in multi-disciplinary collaboration and an exploration of the intersection of art, science, technology and performance.

The pair first worked together on State Theatre Company SA’s 2019 production of Animal Farm, for which Kennedy was the designer and Solly-Slade was assistant director.

“We just had discussions, and a great alignment of the way we think theatre could be created,” Kennedy says. “We know why current models exist… but we wanted to push for a different way.”

Solly-Slade adds: “We are really keen to create works that have a longer development period, and a really laboratory-style rehearsal room where we can just explore and play.”

A longer development period also allows Kinetik to engage artists from various disciplines who can contribute to the design and evolution of each production.

“Kinetik Collective is us at the core, but it’s also a group that will ebb and flow ­– a community.” Kennedy says. “It grows and it expands based on the projects.”

Solly-Slade says it can often feel like different communities of artists stay separate, especially with theatre: “It’s exciting to bring those communities together and hopefully try and create a little bit more conversation. It also expands the conceptual thinking that exists inside the project. We want to expand the way we look at the potential of all of the designs elements, rather than just having them all exist to serve the text and narrative.”

As their first production, Kinetik Collective is currently working on a new development of David Finnigan’s Kill Climate Deniers, a satirical black comedy that sees Australian politicians held hostage by extremist eco-terrorists until a solution to climate change is activated.

In 2014, Australian playwright Finnigan was commissioned by Julian Hobba, then artistic director of Aspen Island Theatre Company in Canberra (and now executive director of State Theatre Company SA), to develop a play about climate change and Australian politics. Kill Climate Deniers was met with a swift backlash, particularly in response to the title, with conservative columnist Andrew Bolt leading the criticism that saw its original development shut down.

Nonetheless, Finnegan’s script went on to win the 2017 Griffin Theatre Playwriting Award and the play was presented at the Sydney-based theatre the following year.

Kinetik Collective describes Kill Climate Deniers as “part action-movie spoof, part political satire, part rave party wrapped up in a piece of documentary theatre”, with the fictional story encased by an account of the tumult that has surrounded the piece. And although it is seven years since it was written, the play still seems timely.

“It feels even more poignant now because since the play was written the Black Lives Matter movement has happened, the storming of the capital has happened, and Extinction Rebellion is happening,” Solly-Slade says.

“All these groups have risen up, which is similar to what happens in the show. It is about extremism on both sides, and just the fact the conversations are not getting us anywhere. They are just getting louder and louder and [there’s] shouting into the abyss on both sides.” 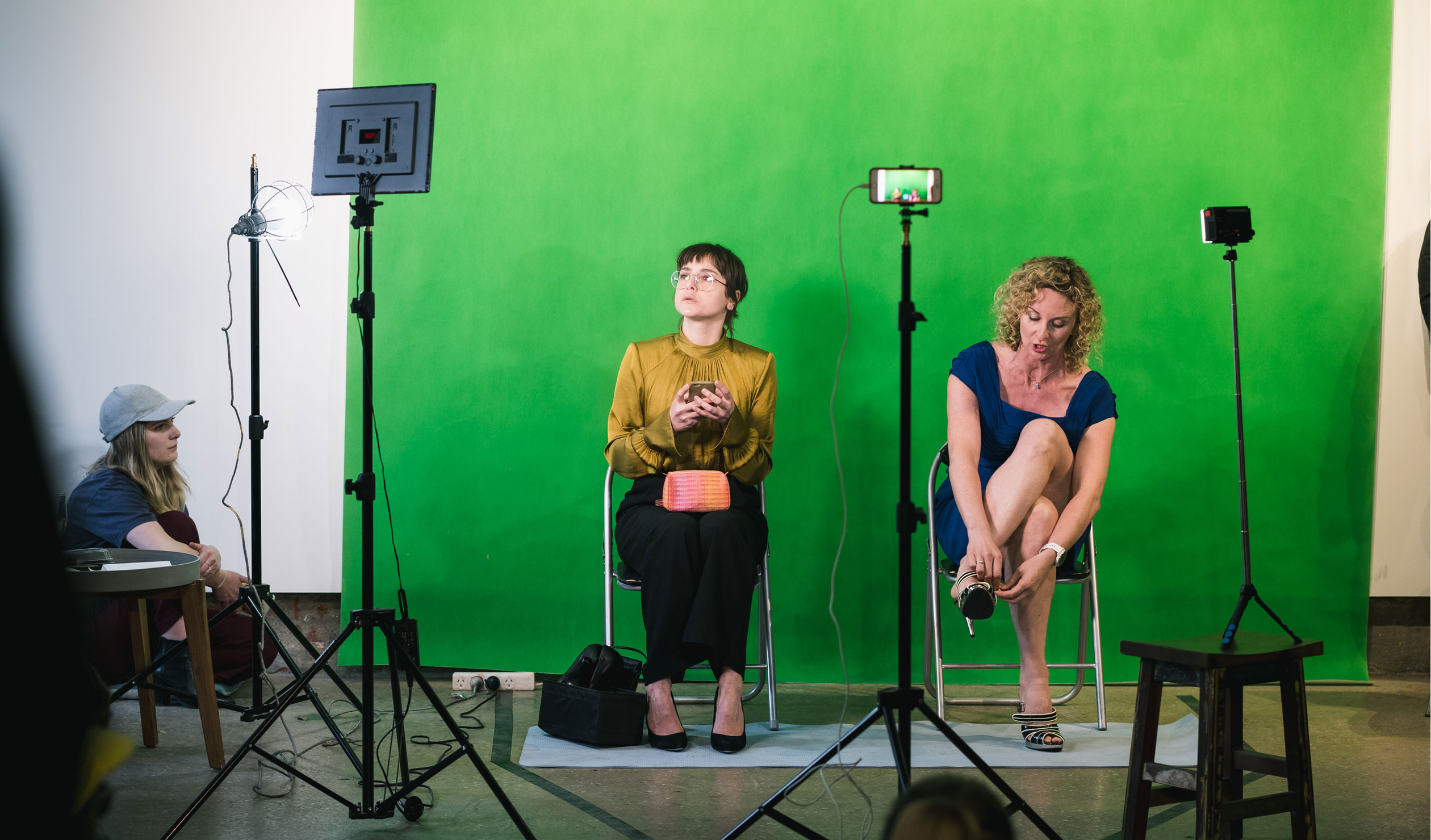 While there have been a few iterations of Kill Climate Deniers across Australia and overseas, controversial discourse still accompanies the text.

“There’s definitely a risk because of the nature of the title and the political history…  [but] this has to be now,” Kennedy says. “This has to be done… Kill Climate Deniers will be our explosion.”

Kinetik will bring the play to the Adelaide stage in 2022 with a cast comprising Anna Steen, Kate Cheel, Katherine Sortini, Eddie Morrison and Ren Williams. It presented a development showing of Kill Climate Deniers last month, and is exploring how it can move the production away from a traditional stage show and create an immersive experience for audiences that’s anchored in a digitalised world.

“You can have an in-house audience that can have one experience and an online audience having another experience… that’s not part of the script, that’s us looking at new formats and how we can manipulate it. That’s the ‘Kinetik’ in it,” Kennedy says.

The collective has collaborated with multi-disciplinary artist Dave Court and composer Mat Morison to uncover greater technological and conceptual depth within the work.

Elements such as data sets and artificial intelligence (AI) generators are in development alongside the rest of the production. Kinetik intends for data sets to be used as springboards for the base of their projections, and is experimenting with AI generators to encourage audience participation: when an audience member hovers an iPad over a patch of artificial blood on the ground, for example, the image on the tablet shows an AI-generated person lying in the blood.

“We are calling it ‘low-fi/hi-fi’,” Solly-Slade says. “There is this juxtaposition of these sophisticated moments of Dave doing stuff beautifully [such as multiple live-stream projections of the actors within the space as they perform in real-time], against deliberately goofy, Snapchat filter, green-screen moments, which is how the politicians use tech in the show.” 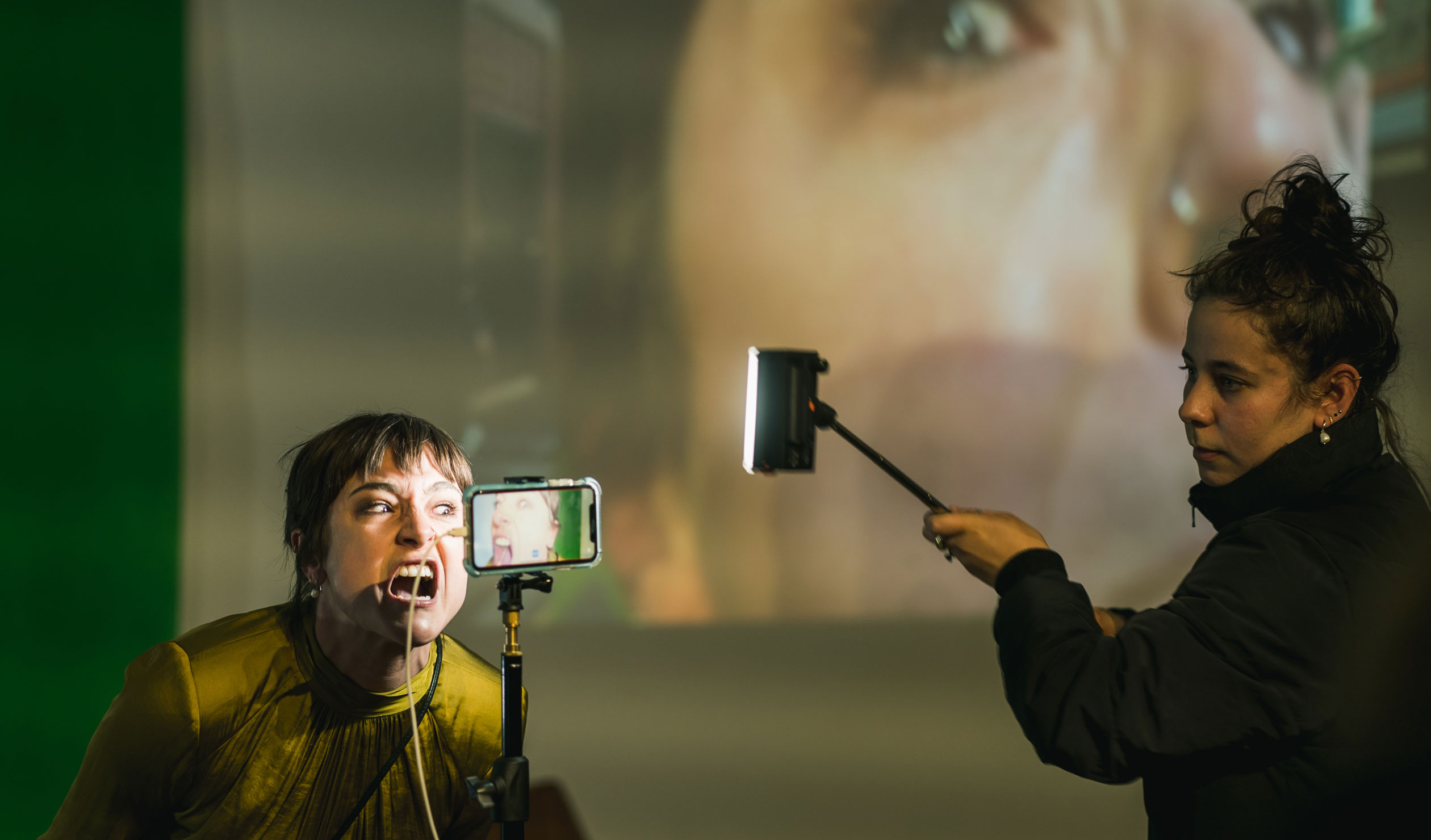 Live-stream projections of the actors will feature alongside the real-time performance in Kill Climate Deniers. Photo: Dave Court

Accessibility has also been a focus of the development process, with Kennedy and Solly-Slade seeing this as an opportunity to find digital solutions to various access barriers.

“I’m interested in accessibility being a part of design,” Kennedy says, explaining how one initiative will see Kinetik trialling technology that pins an Auslan interpreter to each actor through projections.

As Kinetik continues to push conventional conceptions of theatre to the edge, its co-founders hope to build a community that will go on a journey with them through Kill Climate Deniers and into future projects.

“I don’t think you will ever be able to pick what Kinetik will do,” Kennedy says. “What even is theatre? When does it stop being theatre and become an experience?”