In world where “fake news” proliferates and “deep fakes” have us questioning the evidence of our own eyes, Watson’s script offers a timely critique of those who manipulate the “truth” to consolidate power and solidify wealth.

The play opens with sobbing in the dark. Two men are chained to a wall, prisoners whose names we never learn. The program labels them as “One” (Arran Beattie) and “Two” (Chris Best), actors from a foreign land with no memory of their kidnapping or committing any crime. It’s only with the introduction of fellow prisoner, Karl (Yoz Mensch) that our grasp of their plight begins to take shape. Karl’s fortunes have tumbled from trusted throne-room pillow bearer to dungeon-dweller, and it is through his fall from grace that the character of General Ferdinand and the totalitarian structure of his government becomes clear.

This is a dictatorship, with the dangerously sensitive and bombastic General Ferdinand (Mensch) at its head, complete with bedazzled military dress uniform and bronzed Jason Recliner throne. To mark the 30th anniversary of his tyrannical rule, the General has penned a play – The Triumph of Man – and kidnapped the two foreign actors to bring his “masterpiece” to the masses.

Acting as conduit between the throne room and the dungeon is the dictator’s trusted Minister Artemon (Poppy Mee), who, like all the actors in this play, does double duty in the role of a second character, dissident student Bec. Bec and housemate Axelle (Ellen Graham) are both students at the university and, being members of the intelligentsia, the pair are living a precarious existence in the long shadow cast by the public execution of Axelle’s parents for unspecified crimes against the state. Axelle, the more radical of the two, hatches a plot to take advantage of the General’s play by assassinating him as he watches the performance on opening night.

The cast is rounded out by Grace Boyle, playing the roles of Ivana, the dictator’s wife, and Erasmus, a court flatterer and home-grown actor threatened by the esteem in which the General holds his kidnapped players. Boyle plays Ivana with a quiet delicacy, the dictator’s wife delivering a deliciously unexpected moment in the second act. 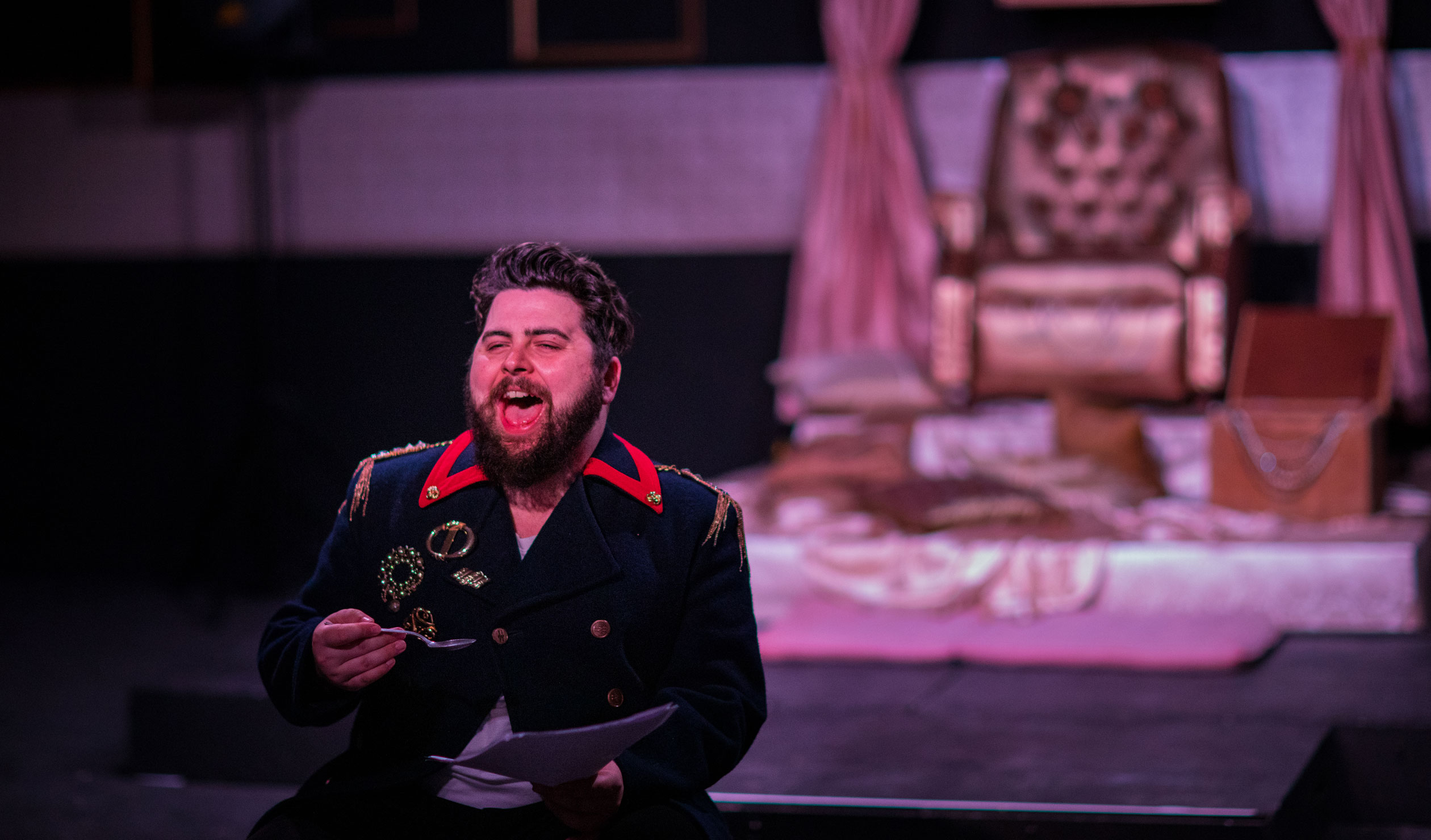 The players all revel in their roles, their enthusiastic sycophancy and the General’s bombast at times almost too voluble for the confines of the venue – the stage cleverly designed by Angley to span the power spectrum from dungeon to throne through the centre of the room. The lighting design is equally ingenious, the ebb and flow of intensity enriching the emotional drama.

The highlight of the piece is the wonderfully hammed performance by Beattie and Best of snippets from the General’s self-serving script – an outrageously over-written piece of propaganda, or as the General dubs it, “state-sponsored entertainment and education”. The two actors are torn – their lives clearly hang in the balance – but do they perform and hope to change the regime from within? Or do they remain true to their principles and art by refusing to be complicit in the brainwashing of a nation?

This play poses important questions about who benefits from messages embedded in art and the media,j and their vulnerability to hijacking as vehicles for propaganda. But in a world where conspiracy theories and vaccine-hesitancy are rife, where does mistrust of media and authority leave us? Perhaps the true value of The Triumph of Man lies in reminding us of our individual responsibility to make careful decisions about the sources of our information. And to beware of men in bedazzled uniforms.

The Triumph of Man: A Comedy in Two Acts is at Rumpus Theatre until September 26.