Truth to Power Café is the brainchild of UK theatre producer and activist Jeremy Goldstein, and is described as a moving and cathartic group experience told through memoir, poetry, image, music and film.

The show has already been performed 39 times in six countries, making the Adelaide presentation at the Space Theatre next month the 40th birthday event. Over the previous performances, some 400 participants – many of whom have never been on stage before – have shared intensely personal life stories as they answer the question posed.

In this Q&A with Suzie Keen, Goldstein, who is currently based in Sydney, explains what the local audience can expect – and why Truth to Power Café is an empowering experience that ultimately shares a message of hope.

Why is your show called Truth to Power Café?

The show is inspired by the political and philosophical beliefs of Nobel Prize-winning playwright Harold Pinter and his Hackney Gang. The Gang included my late father Mick Goldstein and sole surviving member Henry Woolf, who at 91 has written poetry for the play. I co-created the show, directed by leading British working-class champion and theatre director Jen Heyes.

For 60 years the Gang held firm in their belief of an independent media and in speaking truth to power. They remained firmly on the side of the occupied, and the disempowered, and their allies. It is these people we normally invite to appear in the show, and respond to the question: “Who has power over you and what do you want to say to them?”

Ultimately, the show has become a love letter to the memory of my father Mick, and his friends of 60 years, Henry Woolf and Harold Pinter.

Truth to Power Café is described as part theatrical performance, part memoir, part activism ­– how does it unfold on stage?

The show combines memoir, image, film, poetry, music, and participants speaking passionately from the truth of their lived experience in response to the question at the heart of the show. We have different participants in every show, so no single performance is ever the same.

I take the audience on a journey through time and space from 1947 post-war post-Holocaust London, to 1955, when the Gang saw the first performances of Waiting for Godot at the Arts Theatre in the West End, to me becoming HIV+ in 1999 and into a queer dance party in the present day.

Why did you decide to create this experience?

Before I made Truth to Power Cafe, I had spent 25 years as a contemporary theatre producer. I set up London Artists Projects in 2002 and before that I was a founding member of ACT UP (Aids Coalition to Unleash Power). Through my theatre work and community activism, I’ve been able to champion and develop platforms for under-represented voices and new forms of artistic and political expression.

On a more personal note, when I was growing up, I had a very difficult time with my father to the point that we were estranged when he died. His death triggered a rigorous enquiry into our relationship, during which I learnt a lot about myself, and the nature of power, and occupation of the mind. It was that inquiry that sparked Truth to Power Café and put me on a path of truth and reconciliation.

What is the story you share in the show?

Just before my father died, a lifetime of letters between the Gang was acquired by Harold Pinter Archive at British Library in London. The letters, now on public record, were written in the 1950s, so when I started reading the letters, I was able to meet my father as he was as a young man. Of course we never know our parents when they’re that age, so it was something of a revelation to me, and akin to being in a real-life episode of Who Do You Think You Are?.

Much of my story comes from reading the letters, and the empathy and love I found for my father in the aftermath of his death.

Where did you find the other participants for the Adelaide show and what can you tell us about them?

Our Adelaide performance will be our 40th birthday show, so I can’t tell you how happy and proud I am to be able to present it at Adelaide Festival Centre.

I’ve also been extremely fortunate to partner with Edwin Kemp Attrill and the team at ActNow Theatre. Between us we’ve been able to “cast” nine participants who will speak up on a range of topics, from climate emergency to gender, sexuality, consumerism, colonialism, surveillance and living with cerebral palsy.

Some of the participants taking part are artists, others not, and some are concerned citizens who want to be heard.

A real strength in the show is the diversity of people taking part on any one night, and often the most rewarding performances are those which are a true and authentic reflection on time, place, and community. This will be our Adelaide show.

People might assume that answers to the question “Who has power over you?” would be largely negative, but looking at the archive of portraits of previous participants, that doesn’t seem to be the case…

What binds the project together is the benevolent shadow cast by the Hackney Gang and an ambition to understand not just what tears people apart, but what energies and self-awareness might finally bind them back together again. Where Pinter’s work presented rigorous warnings of how our tendencies to betrayal and personal isolation cause rifts between friends, lovers and communities, Truth to Power Café seeks to offer a sense of agency in repairing and recovering loss. The show is about how love, though never easy, is ultimately our only answer. 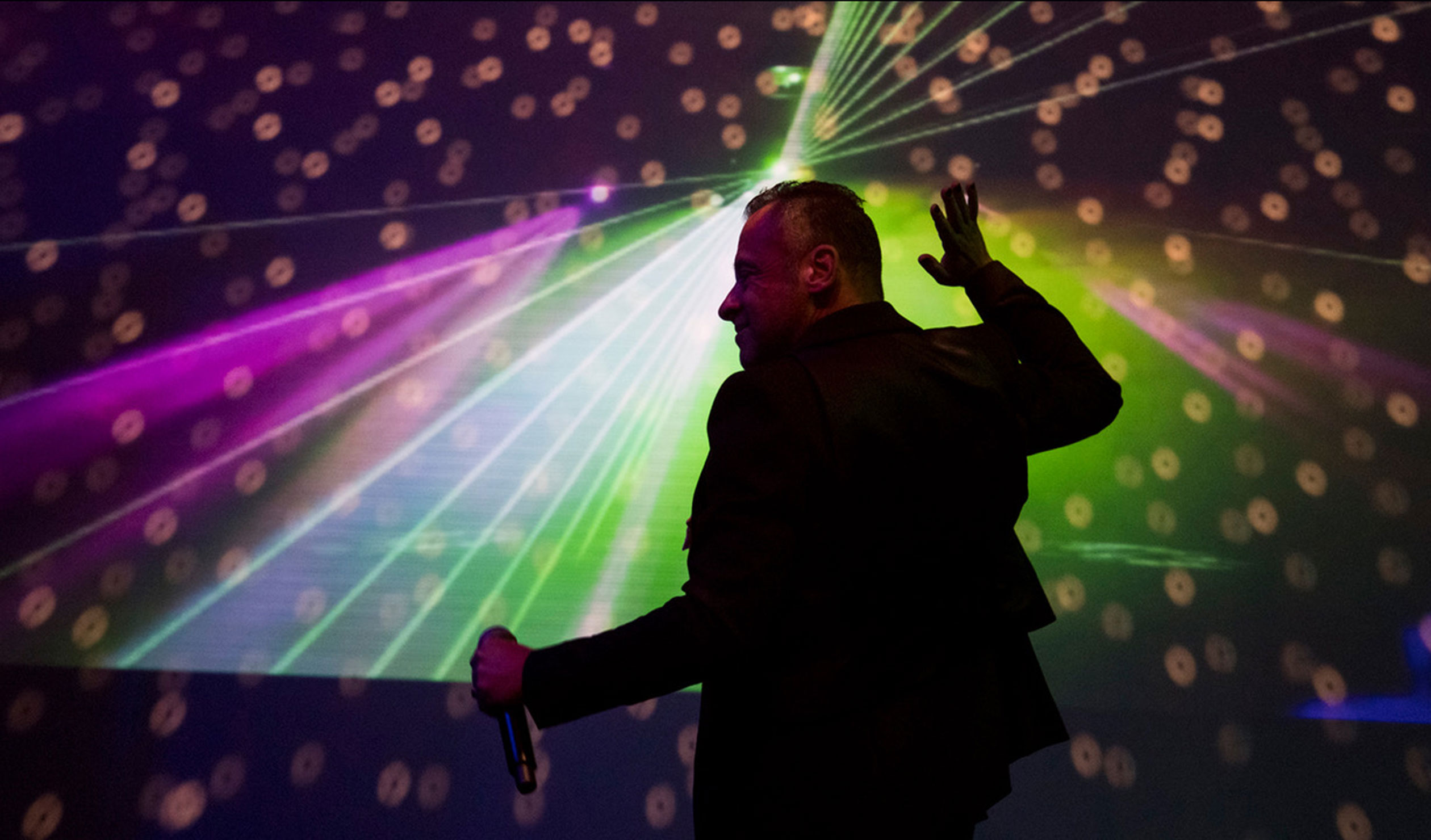 Goldstein at a Truth to Power Cafe show at Riverside Theatres in Sydney. Photo: Ken Leanfore

What are some of the most powerful or moving stories you’ve heard over the 39 previous performances of Truth to Power Café?

We’ve had over 400 participants of all ages, experiences and backgrounds taking part in the project in six countries and four languages. Everyone taking part has their own unique story to tell, and often it’s the first-time participants whose stories resonate with me the most.

When I was last in Australia for the arts and culture program for the 2018 Commonwealth Games on the Gold Coast, we met Gregory of the Waanyi and Jaru people, who spoke of his belief in a high power for Indigenous peoples globally, and Robbie, who spoke of his HIV for the first time with his family in the audience.

In Croatia, the director of Queer Zagreb spoke of his power to make people happy. In The Netherlands, Regina spoke of the power her late son Jim has over her. She said: “The greatest gift he gave me is the power to be me.”

In 2019 we staged our one and only show at London’s Conway Hall which included an 84-year-old Holocaust survivor, the co-founder of Lesbians and Gays Support the Miners, a former resident of Grenfell Tower, and a queer trans Muslim who spoke truth to the divide-and-rule narrative in which we all live.

Given that you are currently in lockdown in Sydney, how will Truth to Power Café be presented in Adelaide?

Before COVID hit I was determined to keep the show as a live event, but like a lot of artists we’ve had to adapt the work to survive.

We ended up making a digital theatre adaptation of the live event which was one of four finalists for the Innovation Award at this year’s London OffWestEnd Theatre Awards. The first part of the Adelaide show will be the Australian premiere of the film, followed by me streamed live from Sydney to introduce the participants who be live in-person in the Space Theatre with the audience.

Like the show itself, the presentation will be an exciting hybrid of in-person, film and digital.

Where ever we do the show it’s a chance to claim agency over ourselves and our community, and to do this, in the eyes of family, friends and allies, is what makes the show so empowering.

At a time when there can be no return to normal, we demand that you listen.

Truth to Power Café is live at the Space Theatre, Adelaide, on September 17, with further performances scheduled for Sydney and Melbourne.