Not often does a play seem to have been conjured from the most recent news headlines, but Hibernation is one of them. Writer Finegan Kruckemeyer describes beginning his draft in 2019 – “and the writing of that world strangely became the witnessing of it”.

First, there is the arrival of COVID-19 and its utter disruption of every aspect of everyday activity, especially with lockdowns bringing daily life to a sudden halt. And there are the intensifying warnings about the need to reduce CO2 emissions to reduce critical levels of global warming, culminating in grim predictions from the IPCC about irreversible consequences if targets for 2030 and 2050 are not met.

But this play is neither documentary or polemic. Rather, like all good sci-fi and speculative fiction, it proposes a parallel world to illuminate our own. Hibernation is witty, intriguing, poetic and full of energising provocations. It offers no solutions but reframes and refreshes our thinking.

Beginning in Canberra – ironically the actual home of climate-change intransigence – we see Warwick Joyce, Minister for Space Exploration, presented with a bold idea from junior staffer Emily Metcalfe. Instead of trying to find ways to implement mass migration to Mars, she has another plan: to give Planet Earth a breather by having the entire human population hibernate for the 2030 calendar year.

This is achieved by a benign wonder drug called 54E – 501E which shuts down all human physical function without harm. With suspended animation (and our suspension of disbelief) the earth can reforest and species can replenish, the ocean can restock with fish and the air restore to purity.

Director Mitchell Butel has really found his stride with this production. Jonathon Oxlade has again produced a design as elegant as it is simple. The set consists of a large screen in three sections (with a disc in the centre), enabling lighting designer Gavin Norris to saturate the stage with delectable colour and video designer Matt Byrne to project a montage of the natural world and monochrome footage of the actors.

There are also large circular daises to elevate the actors, as well as chairs, desks, tables, divans and cushions for the sleepers as required. Ailsa Paterson’s appealingly apt costumes in sympathetic colours complete the visual effect.

The sound design and composition by Andrew Howard continues his fine work in recent productions such as Euphoria. From the spirited opening fanfare of bass, drums and synths, to his string and woodwind and solo piano interludes between scenes, his melodic and winsome sounds enhance the action without being cloying.

There are some excellent performances from this diverse ensemble of 10. Mark Saturno ably sets the pace as the brash cabinet minister who really wants to do something useful about the climate problem and is besieged with unintended consequences. Ansuya Nathan, as Emily Metcalfe, begins as the aggrieved staffer whose work is appropriated and becomes the proselytising world-renowned advocate of One in Ten – the once-a-decade hibernation project that is more scourge than healing.

In the international settings, Kialea-Nadine Williams and Rashidi Edward are memorable as Chidera and Azubuike Okoye, in Lagos, Nigeria. In Bogota, Colombia, Ezra Juanta is Ernesto Flores, caring for his ageing mother Cassandra – played by Rosalba Clemente in a lighter vein, except when, like her sybil namesake, she warns us of the incipient ferocity of nature.

Chris Asimos does well as Damian, the minister’s political flack, and as Ernestos’ gay partner Luis, the policeman dealing with a new kind of chaos after the Big Sleep. Young performer Poppy Kelly works well as Jeong, helping her father Sang prepare for the shutdown. 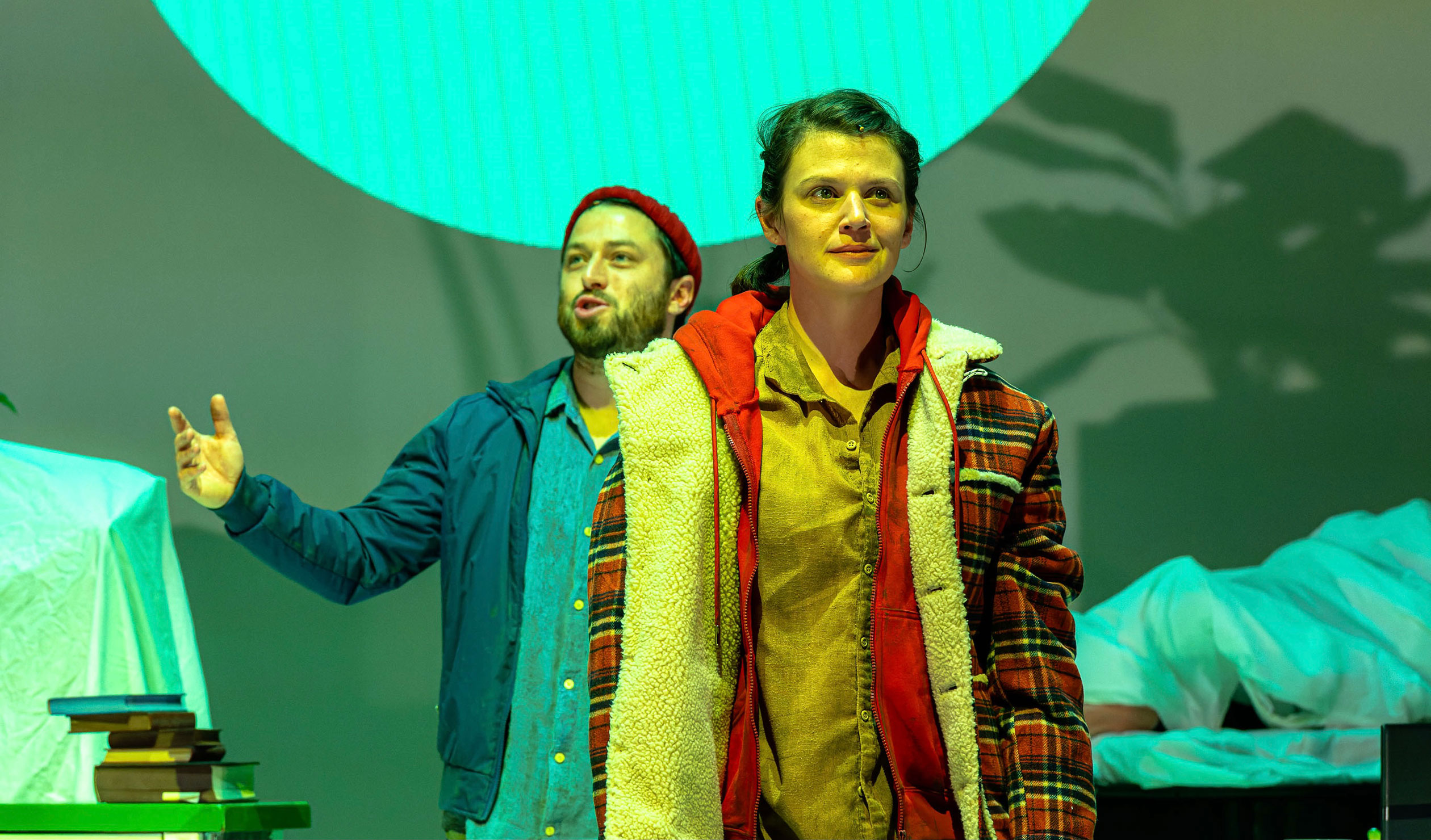 In Act Two, which Kruckemeyer added with encouragement from Butel, the narrative moves from the preparation for hibernation to a glimpse of life during the event. Not everyone, it seems, is asleep. Pete and Maggie (James Smith and Elizabeth Hay), who are uniquely resistant to the drug, are living feral lives in the silent city. They move about the Adelaide CBD, taking what they need or what they fancy.

The local references are vivid and give the dystopic scenes disturbing immediacy. Smith and Hay are outstanding and this unconventional, in many ways digressive, section lends the play an extra fascination.

At the end of Act One, Smith, as Sang the Korean researcher, also delivers an extended, almost mesmeric, monologue describing the natural world reclaiming ascendancy while the population sleeps. It is a highlight of this terrific new play.

State Theatre Company SA is presenting Hibernation at the Dunstan Playhouse until August 28.