In a search of new creative material and inspiration – not unlike our search for new experiences amid a pandemic – writer Charles Condomine invites medium Madame Arcati into his home to conduct a séance. The plan goes awry when the spirit of his deceased first wife, Elvira, appears from “the other side”, making herself at home with Condomine and his second wife, Ruth.

Charles, played by Brad Martin, is an old-school English counties socialite. Martin brings a charisma to the role that endears audiences, convincingly portraying a man who, happily, sits at the centre of an unfolding love triangle. Martin’s ability to deliver the humour of Coward’s script shines forth in this production.

Both wives have a distinct rapport with their husband. Elvira, played by Emily Currie, is a traditionally beautiful, feisty character who has a hot-cold chemistry with Condomine, one of both playfulness and exhausting bickering. Miriam Keane portrays a witty and formidable Ruth, which offers an entertaining contrast to Elvira’s temperament.

On the surface, Elvira and Ruth, as individual characters, represent relatively two-dimensional depictions of women – either beauty or brains, passion or stability. This is where Blithe Spirit shows its age. However, Currie and Keane bring a depth to the two women, lifting them above simplistic female characterisations. As a result, when Condomine grows arrogant and comfortable in enjoying the company of both his wives and the best of both his marriages – a “have my cake and eat it too” narrative – the audience’s sympathy shifts to support Elvira and Ruth. 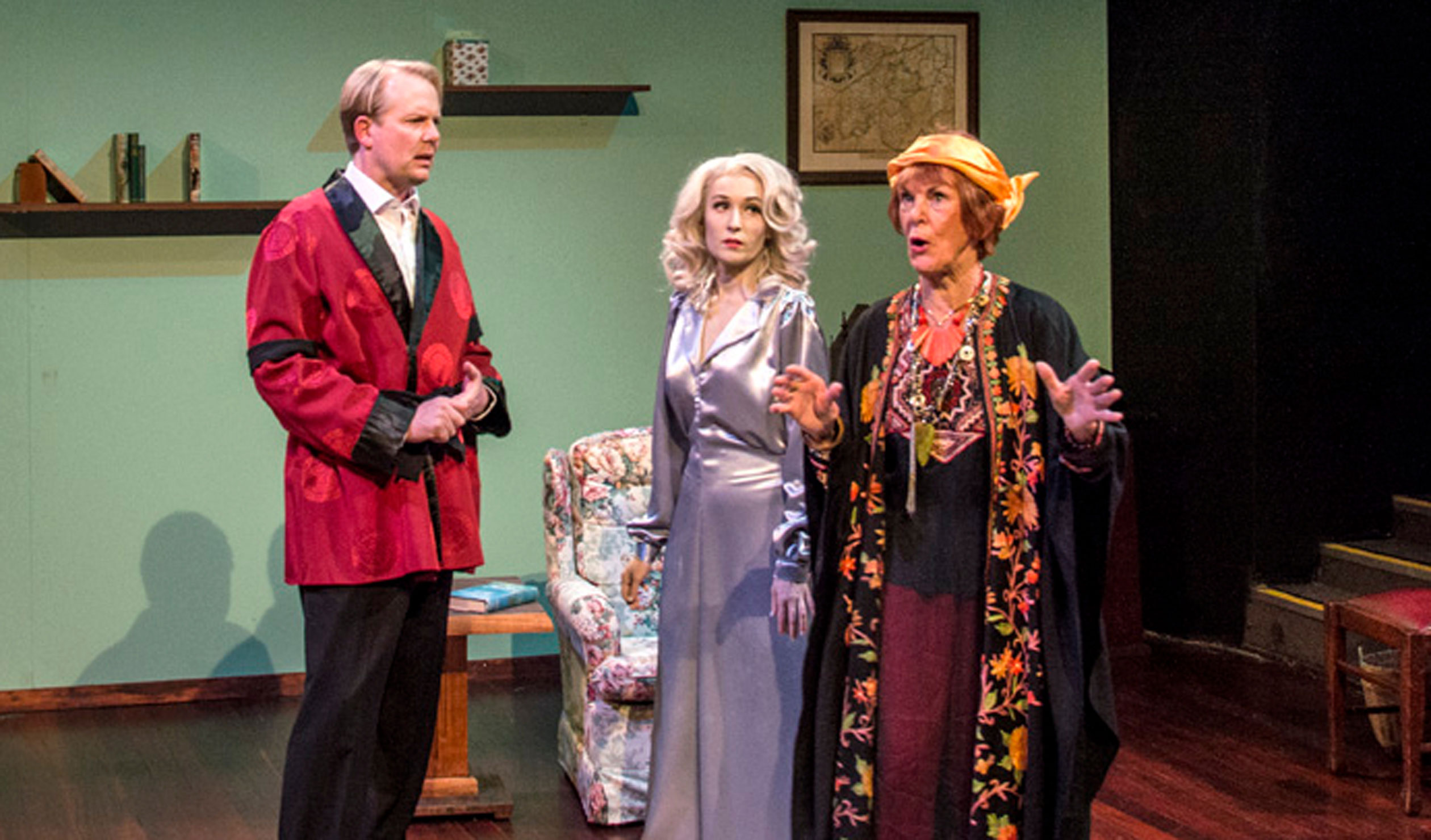 Although the love triangle dynamic provides much of the comedy throughout Blithe Spirit, the eccentric Madame Arcati, played by Jean Walker, brings quirk and vigour to this production. Appearing in colourful headbands, embroidered shawls and eclectic jewellery, Walker fulfills what audiences expect from a peculiar clairvoyant.

The quaint set, designed by director Megan Dansie and constructed by Tony Stankiewicz and Steve Marvanek, serves the actors and time period well, detailed with antique pieces, such as a phonograph, and props as markers of high society: martini glasses, cucumber sandwiches, and floral tea sets. The décor is cleverly designed to aid the mystic elements of the text and is effective in providing a playful and spooky layer to the production.

Under Dansie’s direction, the cast makes animated use of the space, bringing the text alive with clipped English accents. Although this production was delayed due to COVID, this seems to bear no negative impact on the show as the performances are sharp and sleek. The show is well-paced, which both heightens the comedy and allows the two and a half hours in the theatre to fly by.

In the 1940s, the comedy in Blithe Spirit was a welcomed distraction during the war; today, it remains a humorous reprieve from the tiring movements of this pandemic.