A small, circular stage, two chairs and a notebook. A figure steps into the light in a Spanish dancer’s dress. With the first notes from the guitars of Slava Grigoryan and Manus Noble the audience is transported to early 18th-century Peru.

An ancient Incan rope bridge in the Andes has collapsed, sending five people plummeting to their deaths. This is the opening premise of American author Thornton Wilder’s 1927 novel The Bridge of San Luis Rey, a slim volume revolutionary in its time for both its grand narrative sweep and clever structure. The story was told through the exploration of the lives of the five victims, their seemingly disconnected trajectories all eventually drawing them together on that ill-fated rope bridge.

The five interwoven stories are brimming with passion, secrecy and betrayal, yet theatre-goers familiar with the novel will enjoy an extra level of admiration at the audacity of this adaptation by Adelaide’s Brink Productions. The grand saga has been completely reconfigured. Brother Juniper and his quest to understand the hand of God in this tragedy has been cut away, the story reworked with a secular twist.

Playwright Phillip Kavanagh and director Chris Drummond have done something extraordinary. This exotic epic with its theological undertones has been transfigured into a single-handed theatre piece which speaks to our current preoccupation with life’s fragility and the fickleness of fate.

Responsibility for the tales in all their fabulous connectivity has been handed to one character: Camila Perichole, the greatest Peruvian actress of her age. The casting of Paul Capsis as the formidable and flamboyant Perichole is perfection. Capsis unleashes his prodigious cabaret skills, his magnetic Perichole passionately voicing the stories of all the characters, and finally, her own. 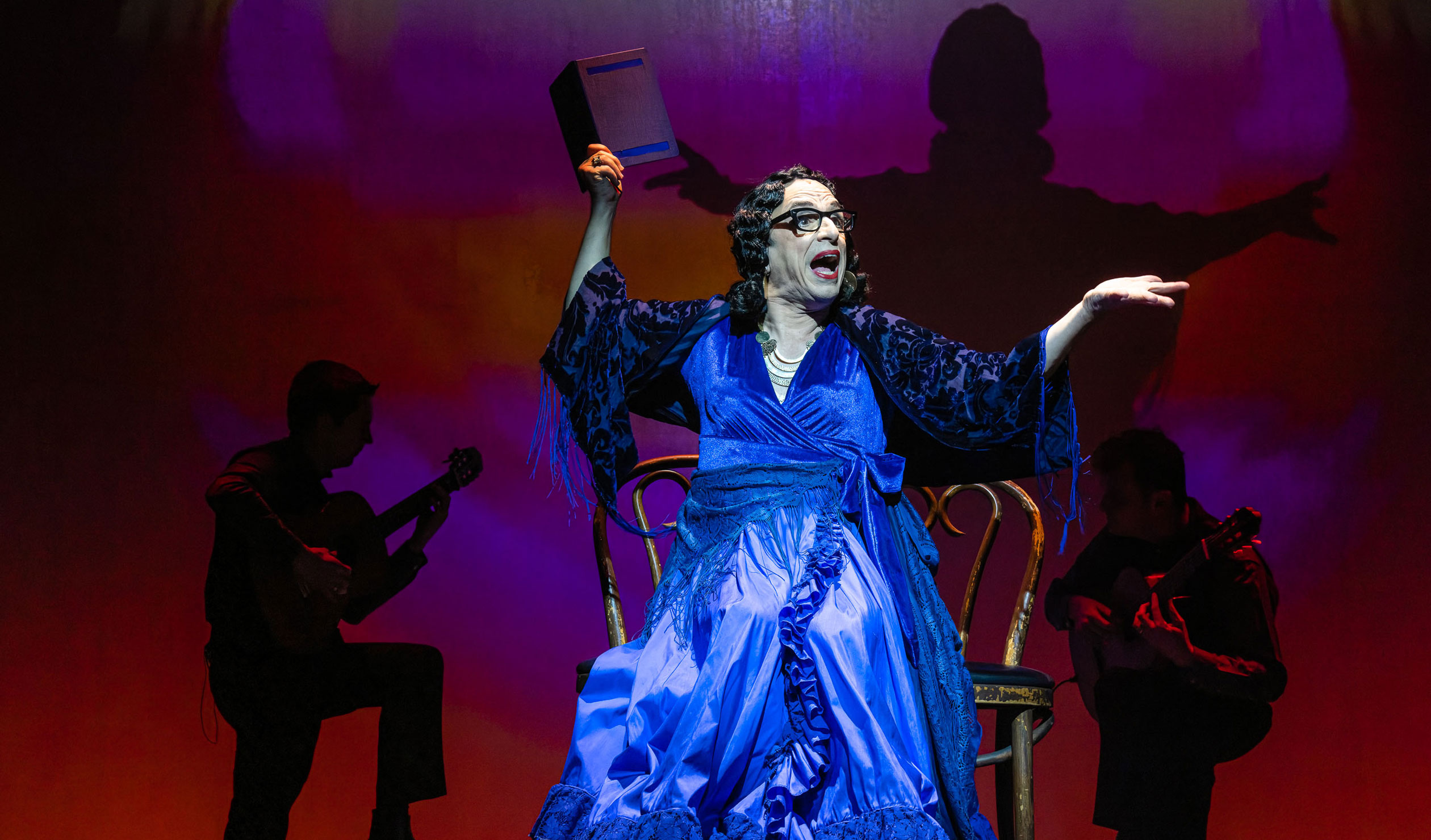 Telling the story from the actress’s perspective proves additionally cunning as it allows storytelling and theatre to take a central role in the unfolding of the tale. While the stories of The Perichole, her son Jaime and her mentor Uncle Pio are naturally centred around the theatre, the other characters’ trajectories are also cunningly threaded to the stage. Twin brothers Esteban and Manuel were theatre scribes and the Marquesa de Montemayor and her orphaned maid Pepita were in the audience for one of The Perichole’s performances.

This clever intersection at the theatre grants Capsis’s storyteller a natural authority with the material, infusing all the storylines with The Perichole’s gift for flamboyance and wit.

You would think from the above that the powerhouses of the production are the performance of Capsis and the script. The music, however, deserves an accolade of its own. Composed by brothers Slava and Leonard Grigoryan and performed on stage by Slava Grigoryan and Manus Noble, the score ingeniously serves as soundtrack, emotional landscape and narrative device.

Spanning musical genres from the indigenous folk traditions of the Incas to the Spanish music of 18th-century Peru (and into the contemporary, including a Sia-inspired piece), the two guitars anchor each scene in time and space, infusing Jonathon Oxlade’s pared-back stage design with Latin-American atmosphere and painting the emotional backdrop for The Perichole’s words. 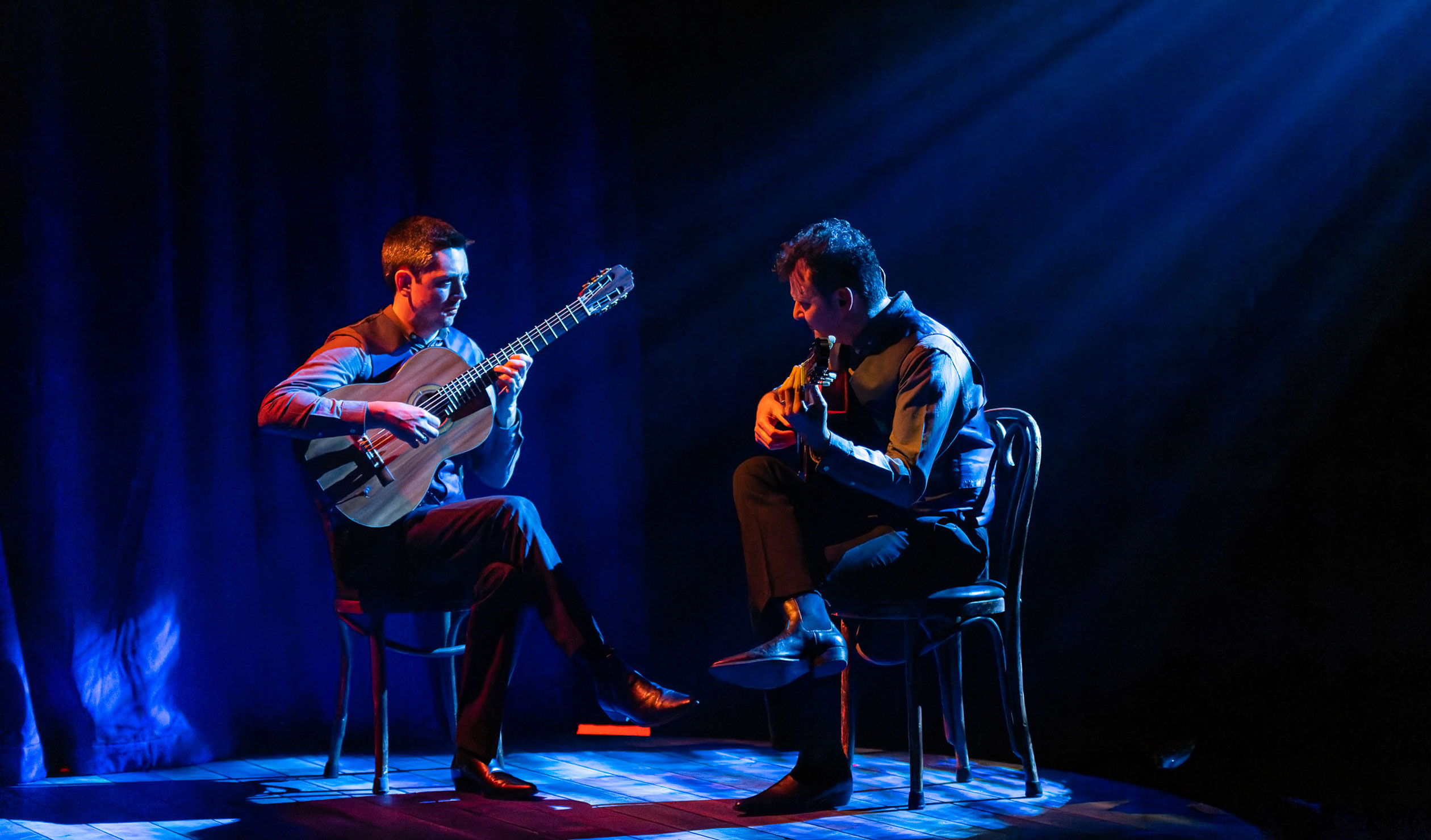 As the narrative sweeps towards the climax, the music enflames the tension, all comedic elements falling away until the audience is left face to face with the raw injustice accompanying all tragedies. Why this moment? Why these people?

Brink has cleverly taken an important 20th-century novel that might’ve remained a period piece, and given it a fresh, contemporary life. The universality of its message about the randomness of fate and the fragility of life is laid bare as the script reconnects with the novel in the final lines: “There is a land of the living and a land of the dead, and the bridge is love.”

As The Perichole tells us, the only way to survive beyond our allotted spans and give our lives meaning is through love – a sentiment as critical today as it was in Thornton Wilder’s 1927.

The Bridge of San Luis Rey is playing until July 24 in the Space Theatre, Adelaide Festival Centre. It was co-commissioned by the Festival Centre’s Adelaide Guitar Festival for its 2021 program and is part of the State Theatre Company’s 2021 Stateside season.