Ripcord, by Pulitzer Prize-winning American playwright David Lindsay-Abaire, was to have played in the Adelaide Festival Centre’s Dunstan Playhouse from November 13-28, but will now run until December 5.

The play will see NSW-based Hayes (who last appeared with the company in The Importance of Being Earnest) and Adelaide actress Carmel Johnson (part of the recent streaming project Decameron 2.0) play Abby and Marilyn, two rivals who become engaged in an epic battle of wills as they seek to claim the best bed in the nursing home room they’re forced to share.

Ripcord is being directed by State Theatre artistic director Mitchell Butel, who describes it as “a comedy goldmine”.

“Halfway between The Golden Girls and Survivor, Lindsay-Abaire brings us two formidable septuagenarians who’ll make you roar with laughter one moment and break your heart the next,” he says.

“How lucky we are to be back in the theatre and how lucky to work on such a gem of a piece with such great talents.”

Due to COVID-19 social distancing guidelines, the Dunstan Playhouse can accommodate only half its usual audience, with around 70 per cent of the tickets for Ripcord already sold. 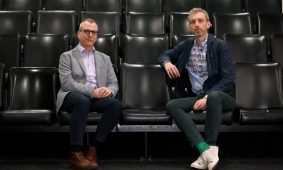 Performing arts in 2020: A difficult stage

The play follows the sold-out season of Victorian thriller Gaslight, State Theatre’s first post-shutdown production, which finished at Her Majesty’s Theatre on Saturday.

Before today’s announcement that SA will reopen its border with New South Wales from midnight tomorrow, it was already planned that Hayes would travel to Adelaide next week so she could self-isolate before rehearsals begin for Ripcord.

The rest of the cast are all based in South Australia, including Nathan Page, Chris Asimos, Ezra Juanta and Jennifer Innes.

State Theatre says Ripcord will bring a “joyful end” to a challenging year, with COVID-19 forcing the cancellation of five plays in its planned 2020 season, as well as the rescheduling of two others.