Literary couple George Johnston and Charmian Clift left Australia for the UK in 1956 amid scandal, eventually heading for the Greek islands, where they aimed to live more freely and focus on writing. Their relationship, fruitful if often troubled, is narrated in this State Theatre Company of SA and Queensland Theatre co-production by their son, Martin (Nathan O’Keefe).

Before the influx of wealthy tourists and international stars, Hydra was home to a bohemian community of artists, including poet-singer Leonard Cohen, painter Sidney Nolan and his writer wife Cynthia Reed (the latter are represented in Hydra as Vic and Ursula, played by Hugh Parker and Tiffany Lyndall-Knight).

Things looked promising for the Australian writers but their marriage was volatile — subject to alcohol, ill health, poverty, infidelity and jealousy. Tensions arose over fear of failure, whose work mattered more, and who acted in a support role. 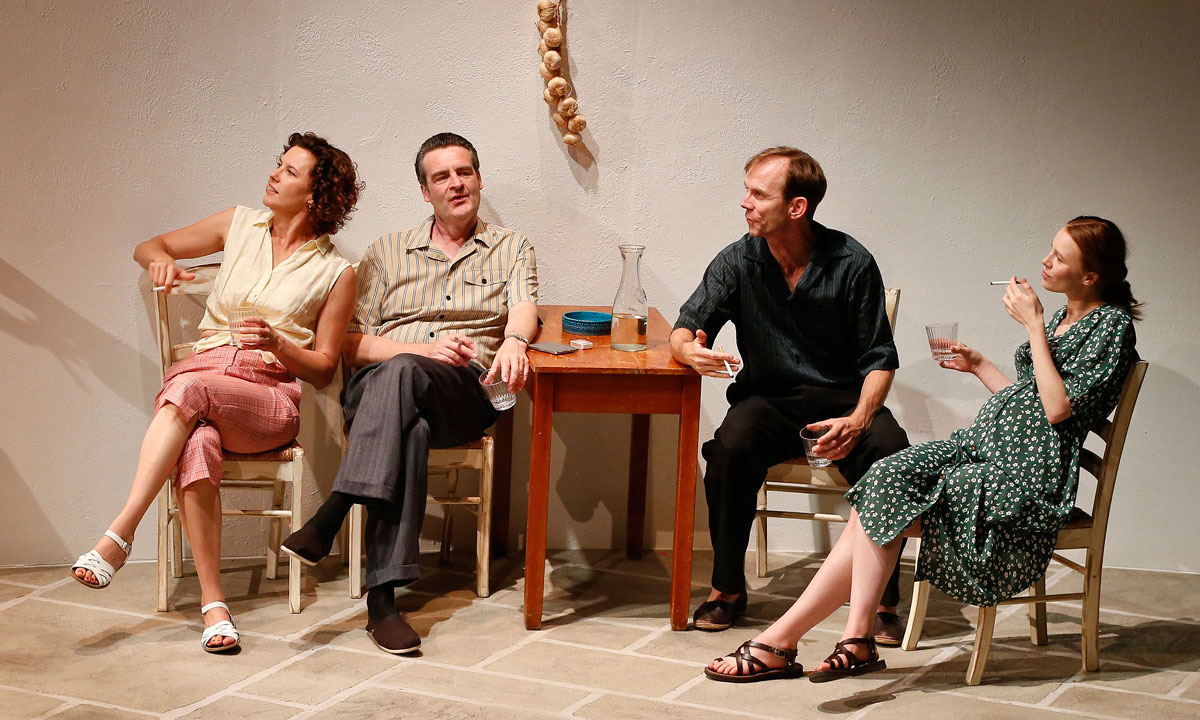 Anna McGahan plays the often frustrated Charmian well; she is animated and colourful, although her delivery can be flat during soliloquies. The experienced Bryan Probets gives us a ragged and driven Johnston, unable to cope with the vicissitudes of health, writing success and his challenged marriage. On the other hand, his depiction of suffering TB and of drunken movements might have been more convincing.

Nadia Wheatley, Martin’s former partner, wrote Clift’s biography and suggested that the couple mythologised their lives. Martin’s narrations in the play convey a sense of their struggles with identity, perhaps compounded by fiction’s licence to blur the truth.

Sue Smith’s script strikes a balance between the pleasures of island life and the writers’ personal difficulties. Courtship and initially idyllic living are briefly sketched before the story quickly ramps up to constant conflict, a plateau focussed around impotence and broken dreams. Clift and Johnston fight but are bound together, so dramatic development is limited, bar a final climactic moment.

The lighting (Nigel Levings) and a white set design (Vilma Mattila) successfully evoke Greek island life, including on the waterfront. Splashes of colour work well against its tall surface, although that structure might have contributed to problems with acoustics, specifically the clarity of dialogue.

After publishing together, Johnston wrote the Miles Franklin Award-winning novels My Brother Jack and Clean Straw for Nothing, among others. Clift established a profile with Mermaid Singing, more memoirs, numerous essays, and many newspaper columns. Their work is often regarded as speaking to our sense of national character, but at what cost?

Directed by the Queensland Theatre’s Sam Strong, Hydra raises questions about how authors understand and represent their lives, and the toll that pursuing an artistic life can take on such creative spirits and their families.

Hydra is playing at the Dunstan Playhouse, Adelaide Festival Centre, until May 19.