Three female actors – Louisa Mignone, Ellen Steele and Nadia Rossi – play six men who live and breathe their footy club in this new production of The Club. Explorations of tradition and power play out as the vice-president and coach argue over whether or not to buy players, with the satire also ranging over issues such as sponsorship, recruitment of coaches who have nothing to do with the history of the club, and even domestic violence.

The original production dates back to 1977, when Australian rules football was not only Victorian-dominated but also male-dominated. It has now become a national game, but it’s still male-dominated – that hasn’t changed, even with the inclusion of a professional women’s league.

Williamson has said that “the greatest target of my satire was the bad behaviour of males towards other males”, and director Tessa Leong’s production takes this one step further.

The casting of women in the men’s roles has a caricature effect: the men’s ’70s hair and clothing are exaggerations of those of the time, and the language they use (both verbal and physical) are exaggerations of their gender within the footy arena. Because the actors are women and because we live in the #metoo era, the satire reaches a whole new level.

At times there are five characters in the room together and only the three actors, and the way the actors change roles in front of the audience plays on an absurd stage-awareness, heightening the laughter (so much laughter!). 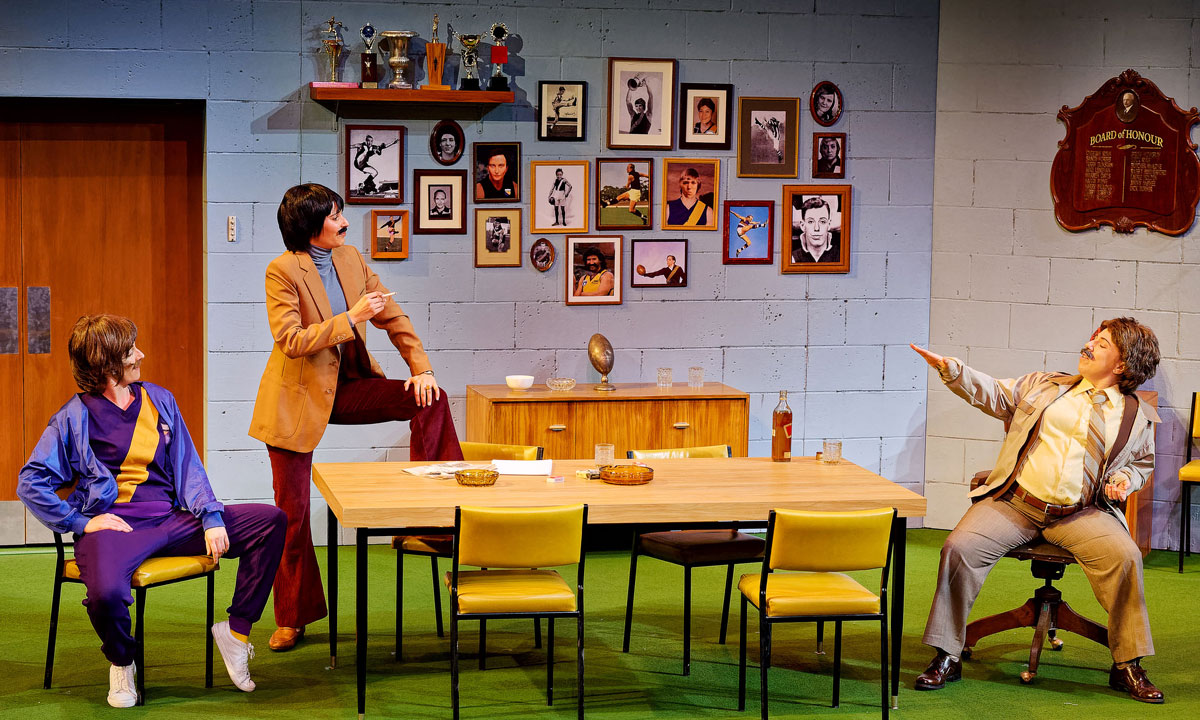 The absurdity goes further in the second set as two of the characters are literally “dicks”, wearing inflatable penis costumes. The audience accepts this, given the characters are also smoking hash, but when the actors change genders by taking off their moustaches and putting on lipstick, the absurdity shifts into a more serious space.

Because this version of The Club has stuck to the original script, word-for-word, there is irony in the gendered politics of the production. Unfortunately, it’s unclear where, exactly, to go with that irony.

I did spy David Williamson in the audience after the lights came up and he had a very big smile on his face. Because if there’s one solid thing you can take from this production, it’s got to be that it’s funny.

State Theatre Company is presenting The Club, an isthisyours? and Insite Arts production, at the Space Theatre until April 20.