While the essentials of George Orwell’s well-known 1945 anti-Stalinesque novella are preserved in this adaptation by Geordie Brookman – his last production for State Theatre – a few elements have been necessarily sacrificed in mounting an 80-minute one-hander.

Characters have been shed and the opening monologue is more tell than show when the set-up is made clear to the audience. It loses some dynamism as a result. 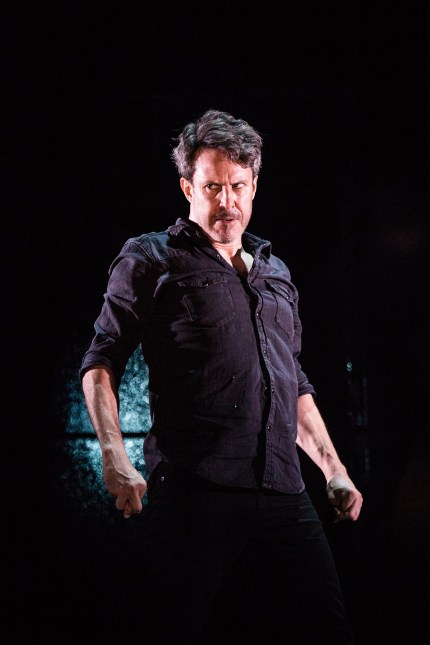 The very capable Renato Musolino, recently seen in State Theatre’s The Gods of Strangers, is the narrator and every animal that Brookman has chosen to include in his script.

Musolino effectively conveys the characters’ mannerisms and voices. His versions of the work horse Boxer and the pigs are particularly entertaining and persuasive, and he rises to the challenge of this condensed adaptation very well.

Andrew Howard’s sound is almost ambient and well-matched to the moods, whether sinister or foreboding or benign, with a couple of well-chosen and alarming disruptions at key moments.

The stage design (Bianka Kennedy) is striking – dark and spare – with minimalist strip-lighting (Alexander Ramsay), but its spare shape and orientation directs Musolino’s attention to a narrow section of the audience.

The familiar tale of animals taking over their farm, ousting its owner and resisting later human invasions, moves from rebellion against injustice to the emergence of a new and arguably more brutal order. The latter involves subjugation, double-speak, propaganda (shall we say “fake news”?), and deals being done with erstwhile enemies.

The original ethos represented in the animals’ seven commandments is progressively qualified, watered down to the advantage of an emerging power elite in the shape of the pigs. We know too well the saying that “All animals are equal but…”. Animal Farm clearly underlines Orwell’s suspicion of tyrannical power and the subversion of popular will.

There is no chance of any comfortable feeling of smugness or wellbeing for the audience. In fact, there is likely to be a squirming recognition of the way that political authority is exercised in much of the world, sometimes not far from home. It is not a big step, either, to think in terms of domestic violence.

It’s worth remembering that Orwell could not originally find a publisher for Animal Farm. In the charged atmosphere of shifting international alliances towards the end of World War II, Allied countries were not ready to admit the cruelties of Stalin’s Soviet Russia.

A key and lasting legacy of Orwell’s Animal Farm is to remind us that when truth is sacrificed, greater suffering easily follows.

Animal Farm is playing a sold-out season at the Space Theatre until March 30.