In a tiny village, a rotund, striped, mono-syllabic playful character called Mort lives in a tree that produces molly melons when it rains. Mort loves to eat the molly melons and to play with fluffy yellow balls called fuzzles.

There’s a routine to village life, where every day the children go to school and other residents go to work – in a tree elevator.

But Adelaide writer Katherine Fyffe’s story sees the tranquility and routine of Mort’s home disrupted by the arrival of a robot called Beep, with bright round lights for eyes and an endearing mechanical voice. 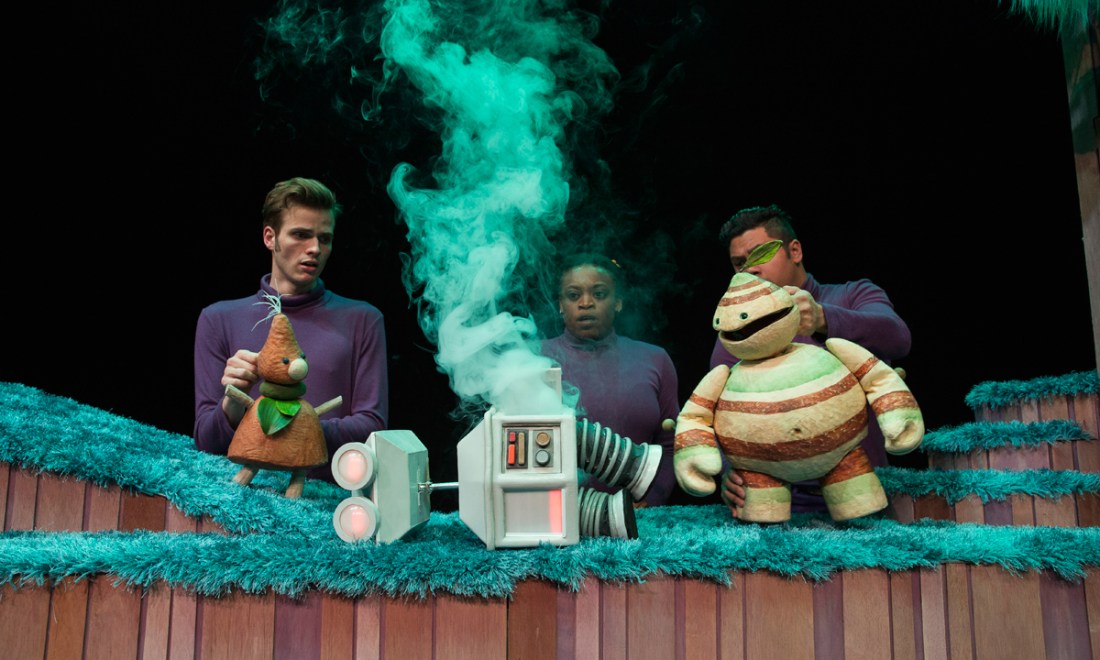 Jonathon Oxlade’s imaginative set is softly lit in gentle greens, while the sound of crickets establishes a natural setting and a serenity that calms the young audience members as they enter, preparing them for an interesting and enjoyable experience.

Youngsters are introduced to the idea of renewable energy, as wind power is required to power the village and later to replenish Beep’s batteries.

Beep also explores the idea of a stranger in the midst: Beep is an electronic being and the creatures in the village need to adapt to her presence. Gradually they warm to her and she participates in the games the villagers play; when she breaks down, they all come to her rescue. Without being overly moralistic, the show plants the seed that we should be welcoming to strangers and assist others in need.

Director Sam Haren delivers plenty of surprises and gags throughout the show, and Tamara Rewse’s puppets are comic and colourful.

Windmill’s Beep will entertain young children because of its colourful setting, engaging characters and thoughtful storyline. I was accompanied by a five-year-old and a seven-year-old who enjoyed it all. Alongside us was a 15-month-old boy on his father’s lap who gurgled and clapped and loved it on a different level.

It is a joy to hear young children who are so involved with the story that they spontaneously speak their inner thoughts. After the performance there is the opportunity for children to make robots and windmills, adding to the overall quality of the experience for the entire family.

Windmill Theatre is presenting Beep at the Adelaide Festival Centre’s Space Theatre until September 3. It is recommended for children aged one to seven.