So says director Geordie Brookman, distinguished Bachelor of Arts graduate and currently principal research fellow at Flinders University, as he introduces his vision for the two productions – and two more next year which is likely to include an original Australian play.

The creative ensemble model will give the cast the chance to really work together in a deeper, collaborative and more direct way, he says.

“Both plays, in different ways, are about how we react to trauma and the creative ensemble is a great vehicle to produce the intensity and explore new ideas to innovate,” he says.

It’s the first time in almost 20 years that the company has engaged a resident ensemble of actors.

Other members of the creative ensemble are sound designer and composer, Flinders graduate Andrew Howard, who will be resident sound designer, Geoff Cobham as resident designer and resident artist Elena Carapetis, who will join Peter Carroll and Chris Pitman as guest actors in Macbeth (25 August to 16 September).

A Doll’s House opens on Friday 30 June and runs until 22 July.

“I haven’t worked in this style before and the company hasn’t had a resident ensemble since the late 1980s,” says Mr Brookman, now in his fifth year as STC artistic director.

“The overarching idea is that it will allow the plays to speak to each other in a much more direct way with the same cast working together for an extended period.”

The latest productions add to Geordie Brookman’s interest in researching the effects of film and television on stagecraft and acting.

“I am interested in the shift required in actors’ technical approach to acting since the rise of film and television, and how they’re rising to the challenge of meeting the type and level of emotional details audiences are used to in TV and film.

“It is more intense work on stage. It requires tremendous endurance to maintain that level of emotional naturalism night after night in a way that is more demanding than perhaps it was 30 or 40 years ago.” 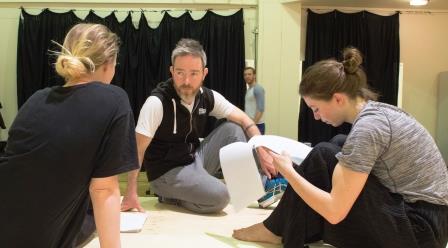 He is the recipient of a distinguished alumni award from Flinders University and is currently working with fourth-year drama students at the Flinders Drama Centre.

Rachel Burke graduated from Flinders in 2015 with First Class Honours in a Bachelor of Creative Arts (Drama) and a University Medal. Since graduating, she has performed in

The State Theatre Company’s new adaptation of A Doll’s House by Elena Carapetis continues at the Dunstan Playhouse until 22 July.