The dystopian political novel was written in 1949 but retains an unassailable place in contemporary culture, soaring to the number-one bestseller spot on Amazon after Donald Trump became US President.

Given that it is set in a totalitarian state where power is reinforced partly through propaganda and the scrutiny of citizens, much has been made of 1984’s relevance in the modern world of digital surveillance, fake news and alternative facts.

Crawford, an experienced actor, playwright, director, author and Arts Party candidate for the Senate in the last federal election, agrees that 1984 “resonates enormously” today, but not just for these reasons.

“I think the deeper significance is what kind of trap are we in and what degree of liberty do we have? What is being taken from us? What is the nature of the oppression in our society?

Crawford says Orwell wrote 1984 as a warning, rather than a prediction, and believes it is best viewed as a response to the author’s own politics.

“It’s fundamentally a story about a guy (protagonist Winston Smith) who sees the political world that he lives in and rejects it for its lack of humanity and is incredibly frustrated in trying to find a way to live as a human person in a dehumanising world.

“I think that’s the thing that is relevant; that’s what I relate to.

“The fundamental thing that is different is that in the book the oppressive society is a Stalinist, communist society, whereas our oppression is more subtle because it’s a capitalist society where our freedom and liberty is reduced and limited by the needs of the market … so it’s very relevant to conversations like the Government’s tax credits to big business while maintaining what I consider to be a kind of war against a whole generation of young people.

“I think there’s a lot of Winston Smiths out there – and frankly, I’m one of them.”

He may identify with Winston, who works for the Ministry of Truth as an editor re-writing history while secretly hating the regime, but in this touring production opening in Adelaide this week that role is filled is by another actor, Tom Conroy (with whom Crawford worked in previous State Theatre production Romeo and Juliet).

Crawford plays the antagonist O’Brien, a fellow Ministry of Truth employee whom Winston thinks shares his views but who is actually a member of the Thought Police and emerges as his torturer in the infamous Room 101 – “the place where one’s worst fears exist”.

“It’s a fantastic role but it’s a tough one to get your head around,” he says.

“Yes, he’s a torturer, but he believes what he is putting Winston through is good; [that] he’s not hurting him, he is cleansing him. He says, ‘I’m going to make you perfect’.

“So I’ve thought a lot about those sorts of circumstances in the world where people endure pain because they think there’s some sort of reward in it … like people who are prepared to blow themselves up for a cause.

“It’s a very peculiar mindset to be torturing someone and for it to be a cleansing, for it to be a celebratory thing – it’s pretty dark and hard to get your head around.”

The British stage production was adapted and directed by theatre-makers Robert Icke and Duncan Macmillan, who have said they want audiences to have “a sense of the visceral face punch” that readers feel upon finishing the book.

The Australian tour, which begins in Adelaide, is spearheaded by the State Theatre Company of SA and features a cast that also includes Paul Blackwell, Ursula Mills, Renato Musolino, Guy O’Grady, Yalin Ozucelik and Fiona Press

The production – which runs for precisely 101 minutes – is largely faithful to the novel, but it does have what Crawford describes as a “bold frame” around the story.

Inspired by 1984‘s Newspeak appendix, which indicates that the regime in the book eventually collapsed, Icke and Macmillan begin and end their play with a discussion by members of a contemporary bookclub.

“It’s never made explicit whether the book they are talking about is Orwell’s 1984 or whether it’s the book within the book about the society or whether it is the book that Winston himself tries to scratch out … but I think it’s a version of 1984,” Crawford says.

“It’s also revealed towards the end of the play that they are looking at it from the perspective of the 2080s, that they are talking about a world from 100 years ago.” 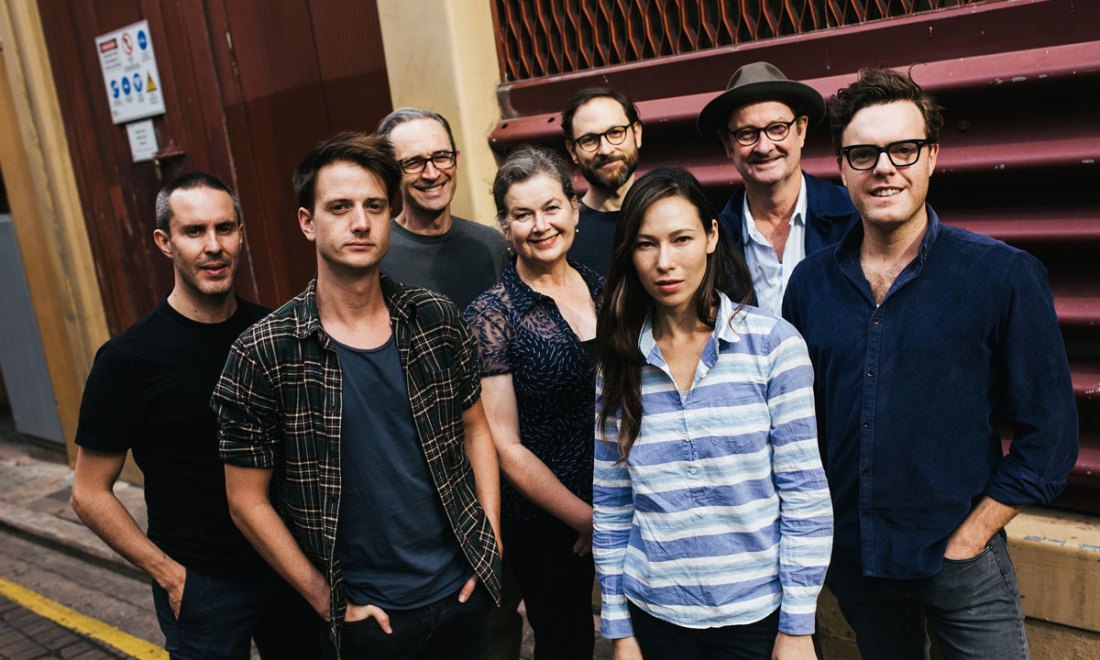 Multi-media technology, lighting and a complex underscore enhance the menacing – sometimes shocking – feel of the production, which earned an Olivier Award nomination during three seasons in London’s West End, where it was well-received by audiences and critics.

One UK critic described it as “Orwell on speed” – a phrase Crawford believes is apt for a “very bold and fast and loud” adaptation that seeks to convey the fractured and frayed nature of the world.

1984 will be presented at Her Majesty’s Theatre from May 13-27 before touring to other parts of the country.