Long Tan, opening this weekend at the Adelaide Festival Centre, is referred to among its cast and crew as a memory play. Rather than a straightforward retelling of the savage Vietnam War battle in which 105 Australian and three New Zealand soldiers clashed with 2500 Viet Cong and North Vietnamese Army troops, it draws on the recollections of those involved to explore the psychology of the event and its aftermath.

Most of the text is taken verbatim from interviews playwright Verity Laughton conducted with 35 Australian soldiers who fought in the conflict, with audio effects (experienced by audience members through headphones) amplifying the intensity of the story.

“We have some very explicit memories of moments in the battle in the play that have come from some of the men,” says director Chris Drummond.

“They all seem to say that what haunts them the most was the sound of the bugle call that the North Vietnamese would blow when they would begin another wave of attacks … they were surrounded on all sides at the absolute climax of the battle.”

While many aspects in the battle were well-documented by the army, Drummond says the soldiers involved have different recollections of certain key events, including the moment of first contact with the North Vietnamese on August 18, 1966, when the group of Australians was sent out to find the source of enemy mortar fire from the previous night.

“One of the soldiers remembers seeing these North Vietnamese approaching down the road, which led to the contact, and another one remembers it more as walking through the scrub and coming across six or seven around a campfire and for a moment thinking they were local villagers or children.

“The discord between the memories has created a lot of emotion for the men over the years; people feel very sensitive about it, so we have had to deal with it very sensitively in the play.

“Verity saw an opportunity to portray those two realities simultaneously to say that in these highly stressful situations where humans are put under such intense pressure, we can disassociate, so it challenges the reality.

“The play tries to evoke that psychological impact throughout, so it’s sort of like a memory play.”

The 12 actors in Long Tan play more than 20 men who are represented in the script, with a few of these particularly identifiable, including Lieutenant Colonel Harry Smith, the Commanding Officer of Delta Company (played by Chris Pitman) and veteran and unofficial battle historian Dave Sabben (Patrick Klavins). During her lengthy research, Laughton also interviewed family and friends of those who died, and people in Vietnam.

Eighteen Australians and at least 245 Vietnamese were killed at Long Tan. It was a  geographically complex battle – taking place during a monsoonal storm over three-and-a-half hours on a number of different fronts in a muddy rubber plantation – but Drummond says the stage production is presented in a way that makes it easy for audiences to follow.

Central to this is the use of headphones, similar to in Adelaide Festival play The Encounter (but without the 3D technology). As well as the soldiers’ voices, audience members will hear sound effects such as artillery and mortar fire, bullets shooting past ears, monsoonal rain and buzzing mosquitoes.

“The sound helps put the audience inside the experience of the men at any given moment,” Drummond says.

“You just follow those stories so by the time we get to the actual battle – and there are quite a lot of places where we depict the intensity of the battle, with the actors going through the motions of what that might have been like physically – I think the audience will understand enough to be driven forward into the drama of it.” 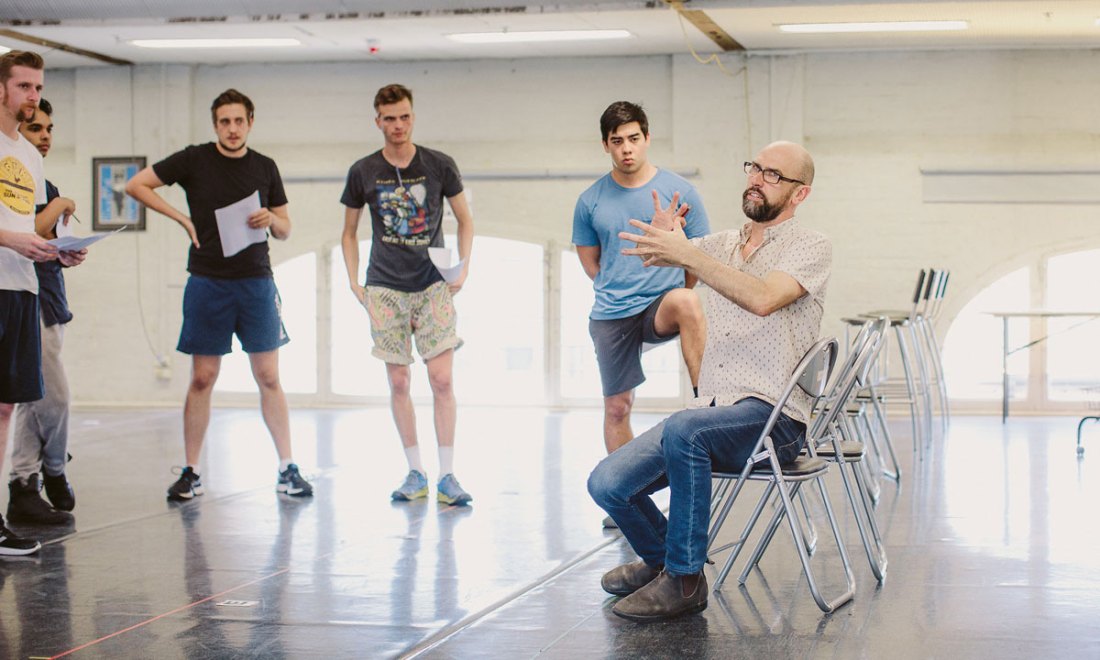 The action is presented on a raised stage between two seating banks, with moments from the conflict depicted rather than a fully reconstructed battle. Long Tan also jumps between different timeframes – before, during and after the battle – achieving what Drummond says feels like a fusion between live theatre and cinema.

He believes audiences will find the result overwhelming and moving.

“I’ve felt more like a choreographer than a director with this work.

“There are moments when the actors appear to be holding abstract versions of guns … other times they are literally crawling across the ground, which is sort of granulated cover that looks like mud, and you could easily imagine they would be doing similar things in a fully developed feature film where they are crawling across the screen looking down the barrels shooting at an imagined enemy.

“It’s not about pretending, but about creating an image that sustains just long enough to give the audience that insight and then it changes into something else.

“It’s been a fascinating production for me as a director to put together because the rules of it are so specific. I’ve never directed any battle scene, I’ve never worked with headphones, so suddenly I’m spending all this time choreographing intricately these quite realistic battle moments.”

While the Vietnam War still polarises people – an exhibition running concurrently in the Space Theatre foyer highlights different perspectives – the Long Tan production team hopes the play will further understanding of the experiences of the soldiers involved and the long-term effects the battle had on them.

“The Long Tan vets feel that although their story is known, it still has not been witnessed,” Drummond says.

“They were national conscripts, they hadn’t chosen to be there, yet they went through that experience and it seems important to tell that story … we want, as best we can, to give the audience just some small taste of how confronting and horrific that experience was for them and for everybody.

“The thing about theatre is it’s always an art form about ideas … there’s something about this collective act of imagining horror that creates a different experience for the audience than it will telling the story of Long Tan in a film – exactly what that will be, I can tell you after we’ve done the show.”

Preview performances of Long Tan begin tomorrow at the Space Theatre, Adelaide Festival Centre, ahead of the official opening night on April 4. The season will run until April 8. Ripples of Wartime, an audio-visual exhibition by Malcolm McKinnon which presents stories from veterans, post-war Vietnamese refugees, anti-war campaigners and others, is showing in the Space Theatre foyer.