The original production was written and devised by enterprising actors Keith Robinson and Tony Taylor, and workshopped with, and directed by, Geoffrey Rush.

Shakespeare gave us an entertaining insight into the world of amateur theatre through his characters, and a professional staging embellishes the gags and provides opportunity for contemporary comedy.

In this State Theatre Company production, designer Jonathon Oxlade has placed a traditional guild stage centrally and surrounded it with modern furniture and props to establish the anachronistic, madcap mayhem that is to ensue.

The costumes are clean, colourful representations of Tudor craftsmen and each performer, like Harpo Marx, has access to pockets of endless props. Mark Pennington’s lighting is always stylish but also complements the feeling of amateurs attempting a performance beyond their powers.

The multi-talented cast play instruments, sing, dance, use slapstick, manipulate puppets and act; they employ almost every comic device ever conceived in 90 minutes. 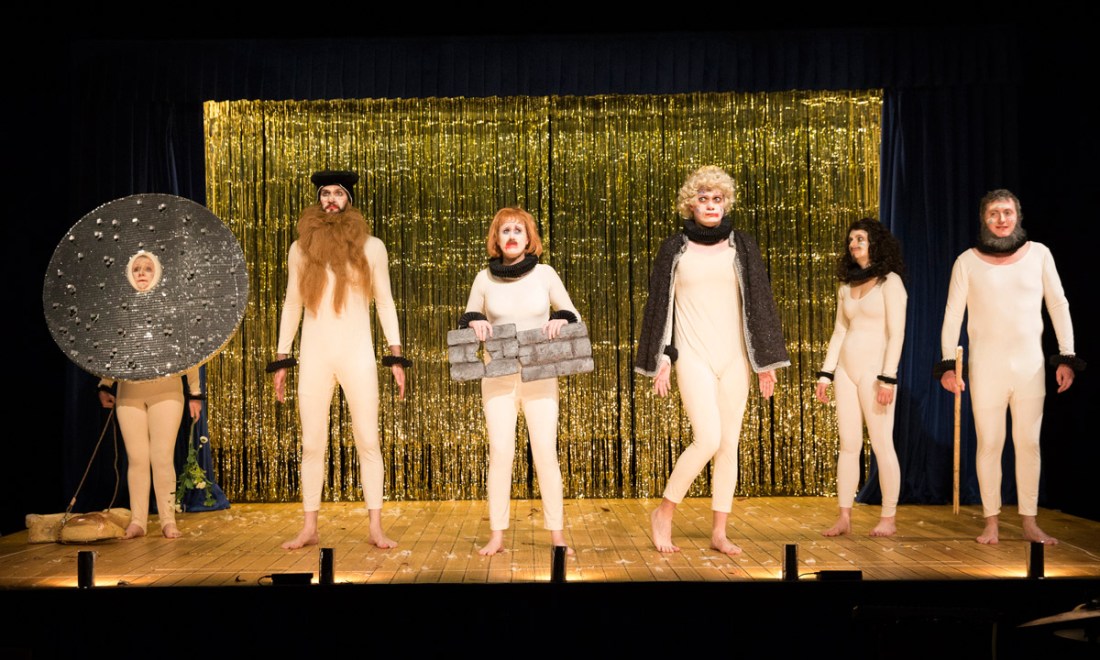 There are puns aplenty which keep on keeping on, fart gags, bawdy lyrics, clever jokes, witty malapropisms, spoonerisms and badinage. The complete repertoire of comedy is here for all – a bit of Python, the Goons, Ionesco, Horrible Histories and the D Generation.

The original writers have laid a platform for imaginative actors to play and invent their own interpretations of some very funny material. You might think there are a finite number of puns on the word “bottom” and that after a while they wouldn’t be funny, but in this production, the puns are pushed till a second wave of gags is realised.

Rory Walker is excellent as the humble Peter Quince in his marshalling of a motley crew; his meltdown when finally performing in front of royalty as he forgets lines, confuses dialogue and becomes totally tongue-tied is a masterful comic performance.

Tim Overton, as Francis Flute, revels in understating the performance of Thisbe, and his musicality contributes throughout the performance. Amber McMahon, dressed a little more like a lord than a joiner, has a ball playing the simple Snug, and her antics as the lion are very entertaining.

Lori Bell and Julie Forsyth chip in with some good lines and timing, and Charles Mayer (as Bottom, looking a little more like Shakespeare than a weaver, and then Mowldie, the professional player) has his moments but could do with a few more. 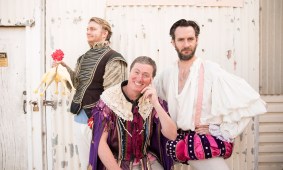 Theatrical romp a celebration of silliness

In a show of highlights, one standout is the rubber chicken dance, which uses clever puppetry and is a joy to behold.

The Popular Mechanicals begins with a fun song having a gentle dig at audiences and the comedy builds to the final performance of Pyramus and Thisbe. Through the ages, actors have delighted audiences with portrayals of these simple, naive, amateurs staging a play-within-a play and The Popular Mechanicals is living proof that there are no small roles when Lori Bell, playing a hole in the wall, accompanied by Mayer and Overton, gives rise to some of the best belly laughs you are likely to have.

The Popular Mechanicals is not quite Peter Brook’s rough theatre but it’s close and guaranteed to entertain.

State Theatre Company is presenting The Popular Mechanicals at the Space Theatre until November 28.