As the unrelenting heat bears down on them, the two men share stories from their past, each hoping to incite trouble from the other. When a lone young woman enters their carriage, Steve, impressed by her bravery, attempts to strike up a conversion.

The uneasiness in the carriage is interrupted by the arrival of two more passengers, and the men – content with a captive audience – seize their chance to have a little fun. But on this train no one is who they appear to be and as the tension reaches boiling point the five strangers find themselves locked in an explosive confrontation.

Written by Australian Reg Cribb (whose play Last Cab to Darwin was recently adapted for film), The Return is an intense psychological thriller tinged with a hint of black comedy. It is a deeply unsettling viewing experience. 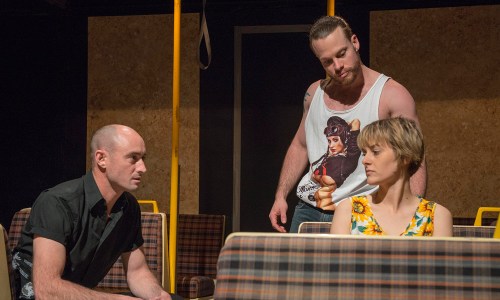 James Whitrow delivers a powerful performance as Steve, a menacing individual who describes himself as “an incredibly complex man”. He completely embraces the role, radiating an air of danger yet also bringing a sense of depth and vulnerability to his character which shines through in the play’s final moments.

James King provides much of the play’s comic relief as Trev, a drug-addicted ex-con who is smarter than he appears, while Sarah Cullinan is young law student Lisa, whose decision to sit alone becomes the catalyst for a shocking revelation. The cast is rounded out by Nicole Rutty as Maureen and Steve Marvanek as The Writer.

There is a palpable tension between the five characters which bears down on the audience until the final plot twist.

The small stage of the Little Theatre at Adelaide University is transformed into a train carriage reminiscent of Adelaide Metro’s old diesel trains. A small raised area above the stage serves as a station platform, complete with illuminated signage, while clever lighting creates the illusion of a moving train.

The Return is a gripping thriller which frightens, excites and ultimately surprises. It is absolutely worth a return trip.

University of Adelaide Theatre Guild is presenting The Return at The Little Theatre, The Cloisters, Adelaide Uni, until October 17.