Playwright Lally Katz’s Neighbourhood Watch takes a frank and funny look at neighbourly relationships; here, Julian Meyrick, who is directing the production in Adelaide, gives an insight into the creative relationships that helped bring it to fruition.

In 2010 I phoned Ralph Myers, the incoming artistic director of Sydney’s Belvoir Street Theatre. Our conversation, from memory, went something like this:

Hi Ralph, what are you doing?

Want me to dramaturge one of them?

OK.  We have a commission with Lally Katz.  Want to work on that?

So I did. Two years previously I had quit the Melbourne Theatre Company where, as literary adviser, I had run the writers’ stream and established the nascent studio program Hard Lines.  In that time I developed dozens of local playwrights.  You could chuck a rock down Swanston   Street and hit one of them.  Lally Katz was almost the only one I hadn’t worked with.

Ralph had a plan for Belvoir that represented a new sense of direction for its program.  He wanted seasons of classic works and Australian works, and rejected what he saw as the bulk-buying of off-the-peg overseas plays that were the dramatic equivalent of fast food, and cooked for a different audience to boot.

From the outside, Australian theatre seems a bear-pit of ambition, with the talented and the determined jostling like rats in a barrel to see who will come out on top.  When you work in it, though, you see the delicate cooperative relationships it actually relies on.  I didn’t get paid for the work I did for Ralph, nor did I seek payment.  He was a friend, and I was happy to lend my skills to his noble quest.  In turn, he generously entrusted me with one of his company’s most important commissions.

For a few months Lally would regularly come to my office at La Trobe University, perfectly attired and coloured-coded, for sessions of dramaturgical development – aka making the play better.

At that time it was called The Hope Dolphin Rides Again and contained yards of overt symbolism that was Lally’s early stock-in-trade.  Over the course of a year, this was gradually stripped away, first with me and then later with Simon Stone, the director of the play’s premiere season.  I don’t think Lally lost anything she couldn’t afford to.  The relationships in what became Neighbourhood Watch are symbolic enough.

“Less whimsical and more magical” was the verdict of one young director I asked to do a comparative assessment of the first and last drafts.

When, in 2013, State Theatre Company of South Australia asked me to direct the play here in Adelaide, I felt both pleasure at the invitation and trepidation at going back to a work with which I had severed ties.  Simon Stone has sometimes been pilloried for his adaptations of classics plays.  The dramaturgical work he completed on Neighbourhood Watch, however, is superb and whatever I gave to Belvoir was given back to me in spades.

Directing a play is like sailing a ship.  You can feel it tack and creak as you cut through the choppy seas of an audience’s appreciation.   Not to put too fine a point on it, you either float or sink.  Lally’s play floats.  It floats very beautifully. 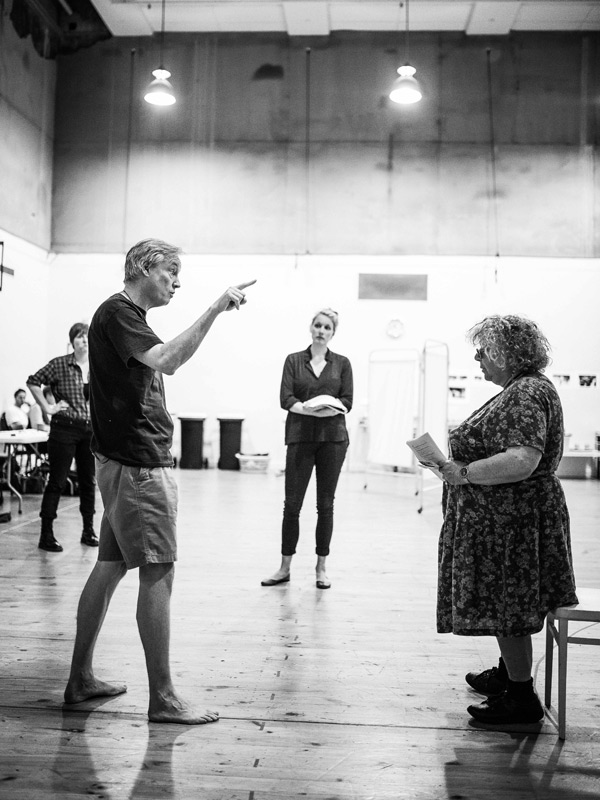 Neighbourhood Watch is about friendship.  It’s a surprisingly difficult theme to explore dramatically.  Outside the hack genres – the buddy movie, saccharine sisterhood schtick – there’s not a lot of obvious territory to build your story on.  Two people meet and like each other. Hmmm.  Two people who have nothing in common, get to know each other and find it doesn’t matter.  It takes someone as divine and whacky as Lally to see the miracle of the everyday and make us newly appreciate the lovely things we get for free.

At the heart of the play is a friendship between a young girl and an old woman.  Catherine is vague, ethereal, in retreat from life.  Ana is the human equivalent of heavy weaponry, able to cut through cant and lies like a depleted uranium bullet.  No two people could be more different, yet so belong together.

Extending outwards, the play takes a forgiving, funny but frank-eyed look at the neighbourly associations without which daily living would be a grind of self-interested economic transactions.

In this production, Miriam Margolyes plays Ana, launching herself into the role with consummate skill, range and emotional depth.  When I thanked her for coming all the way from England to commit to a demanding role for a short, three-week season, she was surprised.  It’s a great part.  Why wouldn’t she come?

As with all actors of the first rank, the work comes first, second and third for Miriam.  An uncanny phonetic precision and acute psychological penetration allows her to commune with her Ana on the deepest level. It’s an astounding process to see close up.

Recently, I unearthed a version of Neighbourhood Watch that Lally wrote after finishing with me but before starting with Simon.  It is the decisive draft, in my view, showing that the play is the result of her own inimitable imagination.  Neither my pedagogy nor Simon’s nuance determined the substantive arc of the play, which is all Lally, pure Lally.

And what a gift it is for those artists lucky enough to stage it.  As I watch my cast tuck into the play’s matchless action and quirky, heart-breaking characters, I think about how we reap what we sow; that in giving freely to those around us, as artists, as human beings, we are so often repaid in the same coin.

Many sad things happen in Neighbourhood Watch, yet it is the opposite of a sad play.

“We are in the life,” Catherine says at the end, using Ana’s tortured but true grammatical sensibility.  Indeed we are.  And it is the people around us, our colleagues and friends – our neighbours – who make it give it such meaning.

Neighbourhood Watch is playing at the Dunstan Playhouse from May 2-24.