Ahead of Tragedy to Triumph, at the Adelaide Town Hall on August 12 and 13, InReview shares Paul Dean’s program note explaining the background against which he composed the concerto, which was written for Adelaide-born horn player Andrew Bain and commissioned by the Adelaide Symphony Orchestra and Aspen Music Festival.

I happened to be sitting next to Andrew Bain on a bus outside Chennai in India whilst on tour in 2015 with the Australian World Orchestra. We had not seen each other for a few years, and I cheekily mentioned that it would be great to write him a concerto one day. And here we are, seven years and a couple of COVID-caused cancellations later, and we are finally at the premiere – with many thanks to the persistence of Simon Lord and the ASO, and the wonderful people at the Aspen Festival.

The piece itself was, of course, inspired by many thrilling hours listening to Andrew play, either from the clarinet section, the stalls in a concert hall or from a comfy cinema chair watching Star Wars*. However, it was two events during the composition process that really helped create the piece as it is today. 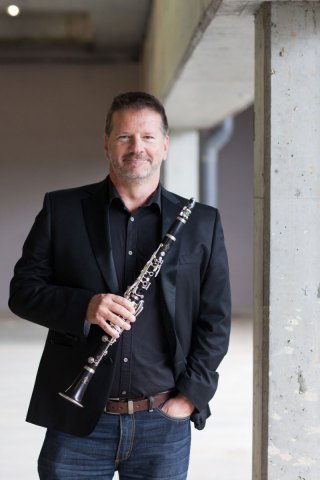 I began teasing out my first ideas in September 2019. By then, the bushfires that were to dominate the east coast of Australia for the next months (and which eventually became known as the Black Summer bushfires) had well and truly begun in my home state of Queensland.

In our house, we became increasingly stuck in front of ABC24, and we lived the progress of the fires for the next several months, increasingly devastated at the loss of life and property and the unstoppable advance of nature over anything that humanity could throw up in defence against it. Like all Australians, I felt powerless, fearful and increasingly angry at our lack of progress on climate change.

The concerto’s first movement, Against the current, is in many ways related to the ways in which the firefighters, despite their herculean efforts, were almost useless against the might of the raging firestorms that were gaining momentum every day and springing up everywhere. The title is also a reference to the movement led by former NSW firefighting chief Greg Mullins, who had constantly warned the Federal Government that danger was looming, to no avail.

The second movement, Alone in the dark…waiting for the fire, is music to represent that eternal nightmare of regional Australians, who bunker down in their shelters, waiting for the approaching attack. This is obviously the stuff of nightmares, and I was haunted by the stories of the survivors who went through this during those months of bushfires.

Then the great Australian horn player, Barry Tuckwell, died, on the 16th of January 2020. I had spoken to Barry a few times, especially during my time directing the Australian National Academy of Music in Melbourne; my last chat with him was at the forefront of my mind the next time I opened the score to work on the concerto. We talked about our shared love of the music of Anton Bruckner, particularly the Adagio of his Seventh Symphony – and more specifically, the moment in that movement when the composer hears about the death of his hero Wagner. I knew that I would have to pay tribute to Tuckwell, an Australian musical legend, in some way during the slow movement of this piece. I wrote the words, “Barry Tuckwell, god of Horn” into the solo horn part and proceeded to write a melody with the notes available from the letters in that phrase. Right at the end of this slow movement, the orchestra stops and pays homage to the great man and the solo horn plays Bb (B), A, C, E, G, D, F, B (H).

The third movement, The Bushfire, developed from a series of mental pictures and images that arose as I watched the bushfires unfold over several months. I also found the Judith Wright poem The Bushfire, which formed the basis of my mindset for the movement, so much so that I placed these words – which express my feelings in such an accurate yet startling way – in the score at this point:

‘I am that which is not able to be whole’,
says the fire: ‘and therefore I devour,
seeking the absolute I do not find.
This strength that falls to ash within the palm
grew through a million days, is eaten in an hour –
and in its death I die.’
From The Bushfire – Judith Wright

The movement is my musical picture of an approaching bushfire – the unrelenting force that stops for no one. The horn represents the firefighter (or, as I say in the score, “Superman”) doing their best to save lives and property against immeasurable odds. After a final assault, the fire (as Wright suggests) dies its death in the death of the trees and wildlife, and an eerie quiet descends, desolate and post-apocalyptic.

The concerto finishes uneasily for the listener, as if sitting amongst the desolate landscape themselves, surrounded by smouldering trees and burnt-out stumps.

The extract from The Bushfire is reprinted with permission of the Estate of Judith Wright and HarperCollins Australia.

* Andrew Bain, born and raised in Adelaide, is now principal horn player with the Los Angeles Philharmonic and will return home for the world premiere of Paul Dean’s concerto. As well as performing on stage, Bain can be heard on Hollywood film scores, and cites performing John Williams’ soundtracks of Star Wars: Episodes VII, VIII, and IX as life highlights.