The Adelaide Symphony Orchestra has recently been forging close relationships with two front-ranking pianists who are in the very prime of their careers, and it is so interesting to compare them.

Brisbane-born but now London based, Jayson Gillham is currently ASO artist in association, while Konstantin Shamray is Russian-born but domiciled in Adelaide – and we are so lucky about that, because he frequently performs here in many capacities, including with the ASO.

With his softer touch, Gillham is more florid and poetic in his playing, whereas Shamray has a stronger, more brilliant style and is a powerhouse of disciplined energy. On their best days, each will surpass the other, and which pianist one happens to admire the most comes down as much as anything to the personal repertoire leanings of these two marvellous musicians.

The spotlight was on Gillham this time. A pair of concerts programmed by the ASO saw him appear both as a concerto soloist and recitalist. Both turned out to be extremely special, although not in ways that one might have imagined.

A chance to recapture the magic from three years ago, when he performed all five Beethoven piano concertos, came in the first concert in the form of Mozart’s glorious Piano Concerto No.23 in A, K.488. Nick Carter had been conductor on that previous occasion in 2019, whereas this time it was the young Dmitry Matvienko from Belarus.

Odd things emerged in this performance that suggested these were two less-than-well-suited collaborators. Clear and even in tone, Gillham’s playing possessed a soft glow with none of the percussive hardness or unwanted detaché that sometimes afflicts performances of Mozart concertos.

The ASO, on the other hand, seemed to be wearing the wrong shoes. In K.488, the orchestra is given a complete run of themes before the soloist enters (making for a so-called “double exposition”); and while tempo was fine and generally the spirit felt right, string tone was gluey and lacked delicacy. Mozart needs cut-glass clarity to really shine, and finesse was generally missing from the orchestra. Matvienko went for larger expressive effects that seemed to leave the concerto’s manifold smaller beauties behind.

But the problem only grew. With Matvienko turned almost entirely away from the soloist and preoccupied with the orchestra, it felt like two performances were going on simultaneously: a symphony concert under the conductor’s direction and an intimate piano recital in the foreground. Alas, never did the twain meet. The incomparably lovely dialogue that Mozart sets up was lost, and Gillham’s quieter moments were smothered by the orchestra.

Before that, Unsuk Chin’s piece, entitled subito con forza, proved a dazzling taster as to Matvienko’s true skills on the podium. Composed in 2020 by the South Korean composer (who lives in Germany), this work was a stylistic tour-de-force that reconstitutes (at least to my ears) snippets from Beethoven (Coriolan overture) to Stravinsky’s Firebird. Here, Matvienko was reassuringly in his element, guiding the orchestra with convincing power and authority.

However, it was not until Rachmaninov’s Symphony No. 2 that the Town Hall audience could gauge the full measure of this conductor. This was a mighty performance of intense emotional and psychological power. Immediately it was evident that he understands completely the brooding interior and epic-scale drama of this composer.

It all became ardently real. One of the most physically vigorous conductors to have fronted the ASO in a long while, Matvienko muscled his forces together to produce the widest dynamics and most exhilarating of climaxes. One marvelled at how well the orchestra played and just how capable they really are at the big stuff. With the Belarusian’s crack of the whip they became a racehorse.

The quieter recesses of this symphony were glorious, too, especially Dean Newcomb’s beautiful clarinet solo in the third movement.

I can honestly say that there have been few times when I have enjoyed listening to the ASO so much. Without exaggeration, this was a great performance; maybe it even surprised the players themselves.

This was Matvienko’s first appearance with the ASO, and what a dynamo he turns out to be. How versatile he is might be another question, but it would be terrific if he could come back to conduct the Symphonic Dances, Prokofiev symphonies or such like. Maybe not Mozart, though. 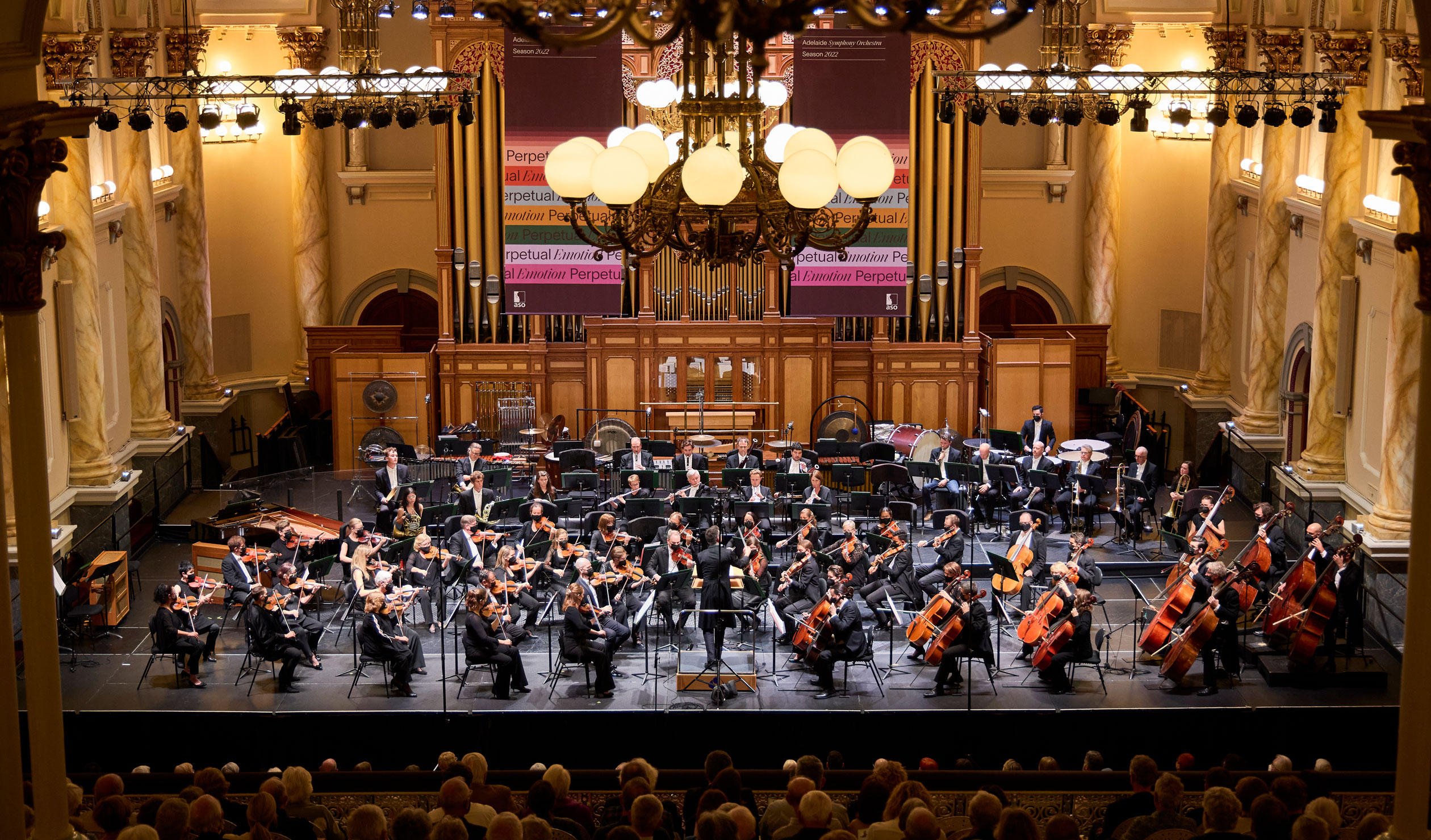 But the story does not end there. Gillham returned to the stage three nights later – this time Elder Hall – for a recital of Bach and Chopin. If ever there was a pianist who knows about creating vocal line, it is he. Unerringly, he finds where the singing voice is and imbues it with exquisitely turned beauty. No matter how busy and layered the music gets, he has this special way of bringing melody to the fore and placing all other musical ingredients at its service.

That’s one aspect of Gillham’s unique style; the other is the articulate elegance with which he treats melody. Decorative elements such as trills and turns are squeezed into a wonderful pithy lightness that enables singing notes to shine. He makes melody effervesce.

As he played through transcriptions of well-known pieces by Bach – Sheep May Safely Graze, Partita No.1, and Jesu Joy of Man’s Desiring – it was almost as if one was listening to a jazz musician subtly playing around with time, compressing it, expanding it, to follow the music’s twisting melodic course.

Gilham plays with a true love of the music, and when the passions heat up, as they did in Busoni’s transcription of the famous Chaconne from Partita No.2 in D minor, he produces moments of towering grandeur. But interestingly, his touch never hardens up or becomes strident in the larger climaxes, as it tends to do with so many other pianists; somehow his tone always remains beautiful.

His Chopin shared these same qualities. The result was a lighter picture of his etudes, waltzes and other pieces than one usually hears; again it was purely built on song. If every fine pianist is a frustrated singer, Gillham exemplifies just that. With the Fantaisie-Impromptu in C-sharp minor and Polonaise in A-flat, one can certainly hear dozens of pianists supplying more power; but where things can become tendentious and showy with bigger concert works such as these, Gillham maintains the same composure and sense of beauty – that word keeps coming back with him.

Since he last played in Adelaide, for the ASO’s Beethoven Piano Concertos, Gilham has developed as an artist. This recital represents another major achievement in this young man’s career, and we can surely look forward to more.

The ASO’s next Symphony Series concert will be Serenity, at the Town Hall on June 24 and 25.