What stands out about the Coriole Music Festival is how this weekend event sets its artistic sights so high. Other chamber music events can boast comfier, more sumptuous performance spaces, but inside the modest galvanised iron barrel room at Coriole Vineyards some extremely ambitious programs have taken place since this elderly festival began in 1999.

Anna Goldsworthy has kept tradition going illustriously since she took over from Anthony Steel as artistic director in 2019, and she surpassed her previous efforts this year. Her programmatic journey during all this time has been to survey what early, middle and late “styles” have come to mean and represent in the lives of many composers. This year it was the last of these, which gives rise to their final creative endeavours. 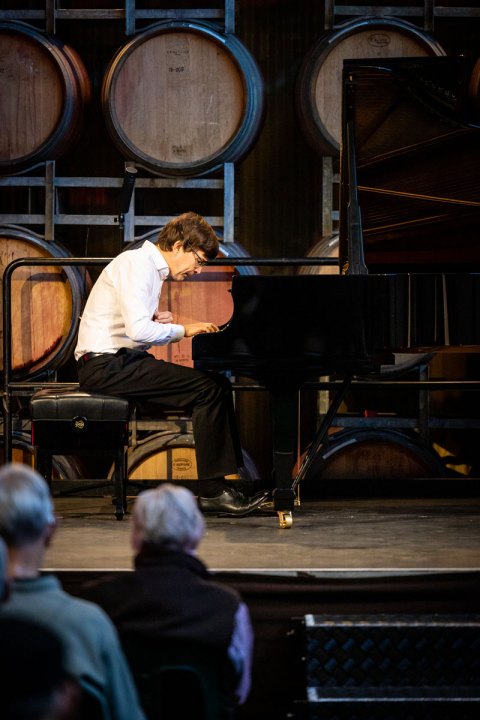 One thinks automatically of Beethoven. Whatever else he (or rather his biographers) bequeathed to the world, it was this notion of a composer’s output falling neatly into three periods: nascent, maturing and summative. So to hear Piano Sonata No. 32 in C minor, Op. 111, the last sonata he wrote, and a work made distinctive by its enormously compressed emotional force and formal concision, was always going to be of central interest in this festival. Especially when played by the impressive Finnish pianist Paavali Jumppanen, who recently became artistic director of the Australian National Academy of Music.

Jumppanen leapt into this towering work not with a philosophical gaze but with determined youthful ferocity. His gestures in the opening Maestoso were coiled up with energy, as if Beethoven was intent on making some demonic parting statement to the world. This was a fine performance from an artist who clearly understands Beethoven; one who realises that beneath all the music’s heated drama simultaneously lies wonderful poetry. Unfortunately, a split note high up in the treble register spoilt things at the first movement’s apex, but it didn’t matter: to hear Op. 111 played so intelligently and so sensitively was special.

Warmly elegiac pieces by Brahms (the Op. 117 Intermezzi) and Elgar (his Violin Sonata Op. 82) complemented this program by suggesting that late style also equates with reminiscence and nostalgia. But three mightily charged works by Bartok, Scriabin and Shostakovich during the festival’s first day had one scrambling to understand what drove these composers to write such vexatious, formidably difficult works in their later years – one liked to think that in music, youth never ages.

With his remarkable virtuosity, Andrew Haveron’s account of Bartok’s Sonata for Solo Violin (1944) – a piece he composed while suffering leukemia – was extraordinary to witness in live performance. Haveron played it with such virile directness and honed perfection that it left one breathless.

Surely nothing could top this? But then Konstantin Shamray seemed to reach even further interpretatively in Scriabin’s Three Etudes Op. 65 and his Piano Sonata No 8 Op. 66. Coriole’s diminutive grand wasn’t quite up to the task, but that didn’t matter either. Here we had this Russian composer’s late piano music in all its mystical and rhapsodic complexity.

Violist Christopher Moore’s performance of the very last composition by Shostakovich, his Viola Sonata (1975), was also deeply read and satisfying.

It looked like courting fate for two living composers to be represented in a festival themed on “late style”, but Anne Cawrse and Andrew Ford each contributed interesting new works that dealt with the theme of “lateness” in different, if somewhat grotesque and comical, ways.

Cawrse’s “Last First Light” is a setting for a vocal duet of words by Peter Goldsworthy on the subject of a condemned man facing his moment of fate by the hangman’s noose. While grisly in subject, the melodies she creates are hauntingly lovely; soprano Lorina Gore and tenor Kim Worley combined insightfully in this piece, as did pianist Lucinda Collins as accompanist.

Ford’s “The Blessing” was a humorous, skittish mini monodrama that depicts Elizabeth Costello, author JM Coetzee’s fictional ageing writer, making a Zoom call to her sister Blanche – this was a neat way of updating her letter writing in the novel. In it she paraded out all her obsessions by comparing cruelty to animals with the Holocaust, but the interesting new element was how soprano Elizabeth Campbell, taking the role of Costello, continually had to navigate between speech and song while Celia Craig held an independent melodic line on oboe. It was full of theatrical zest.

This was Anna Goldsworthy’s most engrossing Coriole program. In her various roles as pianist, speaker and curator, she has elevated this festival to impressive heights, and audiences will miss her wide intellectual and artistic span. Cellist Simon Cobcroft takes over from this point, and we look forward to the direction he takes.

The 2022 Coriole Music Festival was held at Coriole Vineyards in McLaren Vale on May 21 and 22. Graham Strahle’s review covers day one of the program.