Timothy Wayne-Wright once had what must be one of the most surreal dream gigs for a choral singer.

After completing his postgraduate vocal studies at Trinity Laban Conservatoire in London, he won a position as an alto lay clerk at St George’s Chapel, Windsor Castle. Essentially, this means that for two years he was part of the in-house choir for the royal family’s church services

“You live on the castle grounds – it’s an amazingly privileged position to be in,” he told InReview. “It’s a very odd feeling, but it becomes sort of home and a wonderful little bubble in which to live. Only a handful of people in the world get to have that experience.”

He followed that up with another rare opportunity for a singer: joining the renowned King’s Singers as a counter-tenor, touring the world with the troupe for a decade.

Wayne-Wright hung up his performance shoes, leaving his native UK for New Zealand, his wife Gemma’s homeland, where he lives with her and his two children.

After a period as an artist manager, he is now a sought-after choral teacher, holding masterclasses for ensembles and individual singers across the globe.

One of his big ideas is the “A Cappella Academy”, which was meant to begin with its first outing in New Zealand, but had to be cancelled due to COVID restrictions.

This meant the academy held in South Australia over the past week was its first outing as a concept, culminating in a concert at UKARIA, the concert hall in the shadows of Mt Barker Summit, on Sunday.

Next stop for the academy will be Berlin in June. 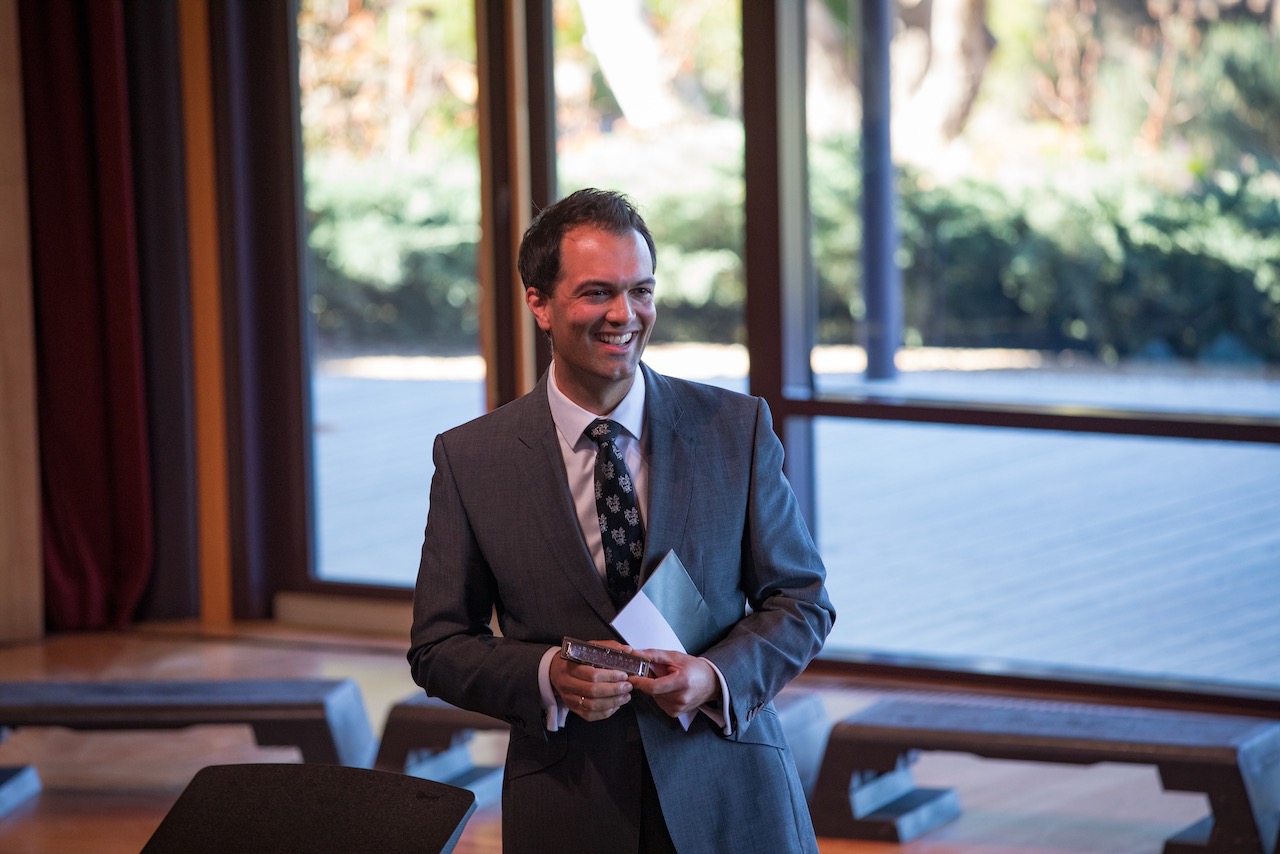 Wayne-Wright says the academy concept is to give the ensembles time to focus on their unaccompanied work, getting deeply into the nitty-gritty of technique and performance.

“A cappella singing – without accompaniment – is really the most pure form of the art,” he says. “You are laid bare as a singer.”

One of his potentially controversial beliefs is that choirs focus too much on their directors – their conductors – which creates a disconnect between the performers and the audience.

“So many choirs rely too heavily on their directors,” he says.

But how to maintain precision in entries and cut-offs?

“The overarching theme is listening. If you take away the safety net of the director, you are forced to listen.”

The proof was in the singing, with an eclectic and ecstatically received concert at UKARIA on Sunday afternoon. The directors did, indeed, take a lesser role, with the choirs taking on broad Wayne-Wright’s mantras of careful listening and having the courage to tackle huge dynamic shifts.

The programming, in very King’s Singers fashion, ranged from renaissance music, to pop, to contemporary choral pieces from the likes of Bob Chilcott.

There was subtlety and precision, but also a kind of joyful abandon at times, in part no doubt driven by Wayne-Wright’s comment before the concert that “singers are hungry to get back to performing – we’ve been starved of interaction and a sense of community for so long”.

Speaking with the standing ovation still almost ringing in his ears, Wayne-Wright said it was “an amazing showcase of what can be achieved in a small amount of time”.

“If the singers are dedicated, up for the challenge, and open their ears and listen to the advice and take on little bits of tips and tricks, change can be massive. And tonight absolutely proved that.

“It was the difference between all the choirs on Wednesday night making a pretty sound, in tune, it was blended, all those little things were there, [including] the ability to engage with an audience.

“One of the things we talked about a lot was changing the tone with which we sing – so it can be breathy one minute and really hard the next. And that’s something that nobody really started with on Wednesday, but it’s those sorts of things that get responses from the audience: when you bring them in one minute with intimacy and then slam them against the wall with power the next. And that’s what I absolutely love doing. ”

He said his first A Cappella Academy exceeded his expectations.

“Absolutely. I could never ever have wished for it to be somewhere like this. The acoustics in that hall are just perfect for chamber music, whether it’s choral or instrumental. So to be surrounded by four great choirs, that venue and this as a backdrop – remarkable. But hopefully it’s the start of something special.”

The UKARIA Cultural Centre, the vision of arts benefactor Ulrike Klein, has a vision to create opportunities for artists, so chief executive Alison Beare leapt at the chance to host the academy.

“When Tim approached me with this idea for an A Capella Academy it really resonated as there is such a rich choral tradition in Adelaide,” Beare told InReview. “Imagine our joy to see it come to life, culminating in such an inspirational concert last Sunday. Now the foundation is laid we will build on what has been achieved and already have plans for 2023 and beyond.”