A British institution since 1895, Last Night of the Proms is an occasion of jollity verging on silliness as well as unashamed jingoistic flag-waving.

These days, Last Night of the Proms is something of an unofficial worldwide franchise, having been adopted by a dozen countries including, rather surprisingly, the US. So we need not suffer any colonial cringe for having this harmless occasion of pomp and ceremony appear down under, courtesy of the Adelaide Symphony Orchestra.

This time round was not the most high-spirited occasion, but a surge of good feeling eventually erupted through the Festival Theatre that at least made one temporarily forget about the present day’s strife.

Despite a handsomely constructed program, the first half was slow to gather steam – no doubt due to the mood of our times, or possibly because the Festival Theatre lacks the all-in friendly atmosphere of the Town Hall where Last Night of the Proms was last held in 2019.

A good old starchy number, Walton’s Orb and Sceptre: Coronation March made an effective if not quite stirring impression as the orchestra gradually found form. Vaughan Williams’ Fantasia on Greensleeves was lovelier, sending a wave of glowing nostalgia through the theatre. The ASO’s harpist being indisposed on the night, pianist Michael Ierace filled in on electronic keyboard most capably: indeed it sounded so much like a real harp that one had to look twice.

Last Night of the Proms depends above all on humour and personality. Conductor Guy Noble supplied enough jokes and one-liners to keep the show ticking over nicely, and Desiree Frahn gave wonderful performances of Czardas from Johann Strauss’s Die Fledermaus and Puccini’s O mio babbino caro – she really has become Adelaide’s own star soprano.

However, for this concert to really catch fire, it needed other singers for her to bounce off, or perhaps more solos from the orchestral musicians. Simon Cobcroft’s truly glorious cello solo in Wood’s Fantasia on British Sea-Songs proved to be one rare moment to really enjoy what the ASO players are capable of, and one wanted more such moments.

Elsewhere, interest fell on two works by women composers whose music is seldom performed. Peggy Glanville-Hicks found her way into the British musical establishment like few Australians ever have, learning composition under Vaughan Williams at London’s Royal College of Music, and also studying piano and conducting there under Arthur Benjamin and Malcolm Sargent. Yet her compositional voice remained resolutely her own, as witnessed by a strikingly original style that takes on all sorts of non-Western influences. 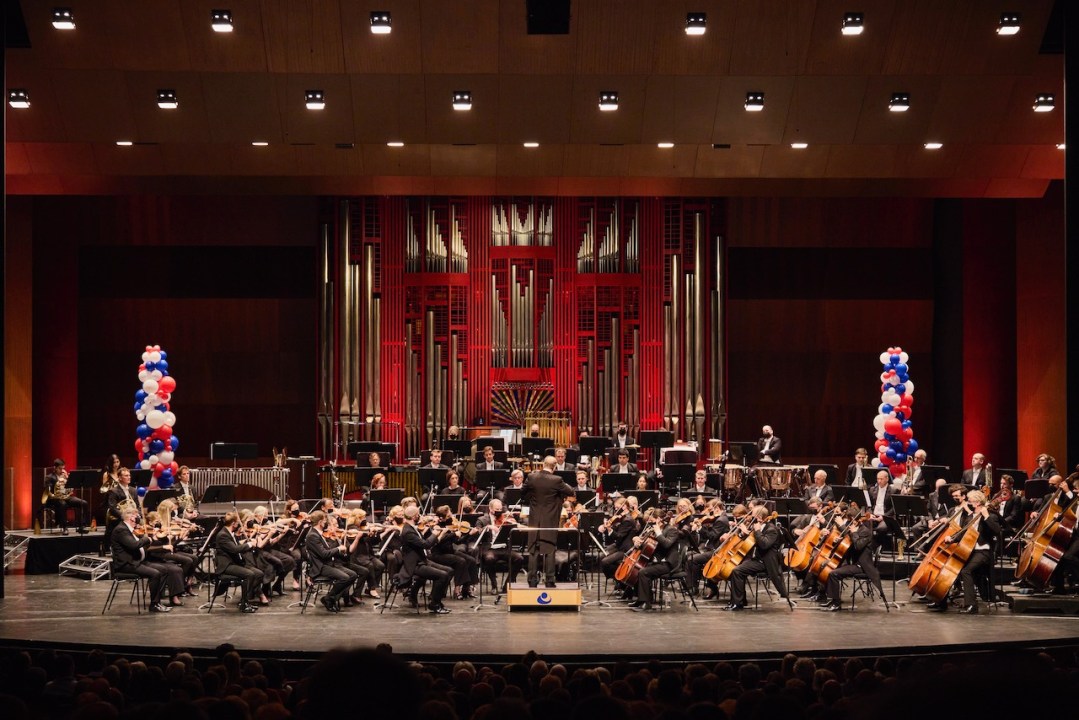 Witnessing the last movement of Glanville-Hicks’ Sinfonia da Pacifica with its pounding ‘jungle drums’ and tribal sounding melodies was just extraordinary. Apparently, she was inspired to write it after passing through Jamaica by ship from America back to Australia. We should get to hear the full work one day.

An overture by Ethel Smyth, the UK Suffragette composer, was no less compelling. From her opera The Wreckers (1906), which depicts villagers Cornish coast preying on passing sailing ships, it was full of drama and almost cinematic in sweep. The ASO played it well, although more power in the string section would have helped bring out its ripeness.

After a fun clap-along, the audience opened its vocal chords in a hearty rendition of Parry’s Jerusalem as red, blue and white streamers cascaded down from the dress circle onto the patrons below. A celebratory mood had well and truly taken hold.

But the icing on the cake was hearing Guy Noble sing ‘When I was a Lad’ from H.M.S. Pinafore, using his own substitute witty lines on how to survive Omicron and the failings of the British monarchy. Wonderful stuff to cap off a night that warmed the soul and cheered the spirit. Cheers ASO and especially Noble for a jolly good show.

Just no-one breathe a word about it to the cultural reformists.

Last Night of the Proms, conducted by Guy Noble, played for one night only at the Festival Theatre on April 1.