Mills has conceived Nativity on a similar scale to Handel’s great oratorios, and Messiah in particular, with the story of the birth of Christ at its heart, aria-like solos that reflect on key moments, and elaborately arranged Christmas carols that serve as choruses. One hears “Once in Royal David’s City”, “O Come, O Come, Emmanuel” and “Silent Night” in all their melodic familiarity, but they are supplied with arrestingly fresh and wonderful harmonies.

Nativity is a difficult work to approach at first, for a couple of reasons. One is the complexity of textual materials Mills brings to this long, 70-minute work. Forming its backbone are narrations from the Gospels of Luke and Matthew, beginning with the angel Gabriel visiting Mary, the manger scene, and concluding with the flight by Mary, Joseph and the baby Jesus to Egypt to escape Herod’s wrath.

In between the gospel accounts, Mills incorporates passages from the Old Testament and new writing on a variety of contemporary subjects. Poems by Yehuda Amichai and Naomi Shihab Nye address the Arab-Israeli conflict from a domestic viewpoint, while another poem by Maureen Jipiyiliya Nampijinpa O’Keefe, a Walpiri woman from the Northern Territory, laments the lost songs of motherhood in ancestral lands.

All these texts were supplied in a printed program, but alas it was too much to digest. Surtitles would have helped.

A second difficulty concerns the subject itself, which either silently nags away or seems perfectly innocuous, depending on how you look at it. That Nativity is so thematically focused on the Christmas story might seem a little surprising for a new work by a contemporary Australian composer. With its much more daring inclusivity, Bernstein’s Mass remains a more modern work both in concept and sound, despite having been written half a century ago.

Nevertheless, through the addition of modern texts Mills has constructed a cultural span that is wide enough to make this new work more than merely a Christian fest. Part I confines itself intimately to the crib scene, but Part II turns its attention to the deeply troubled Holy Lands as they exist in present times (one hears “gunshots” from organ and percussion), and Part III seeks to transcend conflict through Alfred, Lord Tennyson’s words, “ring out the old, ring in the new”.

Musically, it is an impressive and magnificent work. In harmonic language it is reminiscent of Delius, Vaughan Williams and Holst, while in spirit it shares a kinship with Britten’s A Ceremony of Carols – Nativity seems to belong to the great choral tradition of British composers. At the same time, it is entirely Richard Mills in style. Again he has kept modernism, as a stylistic token, right out of the picture. His score is restlessly mobile, kaleidoscopically colourful, and warmly neo-romantic. Gestural flourishes ignite with vigour and are counterbalanced by glisteningly magical sounds from celesta, harp and xylophone. Nativity is a beautiful torrent of sound.

Mills gives enough room for his solo singers to stand out, although they have to push hard over the orchestra and three choirs to be heard. 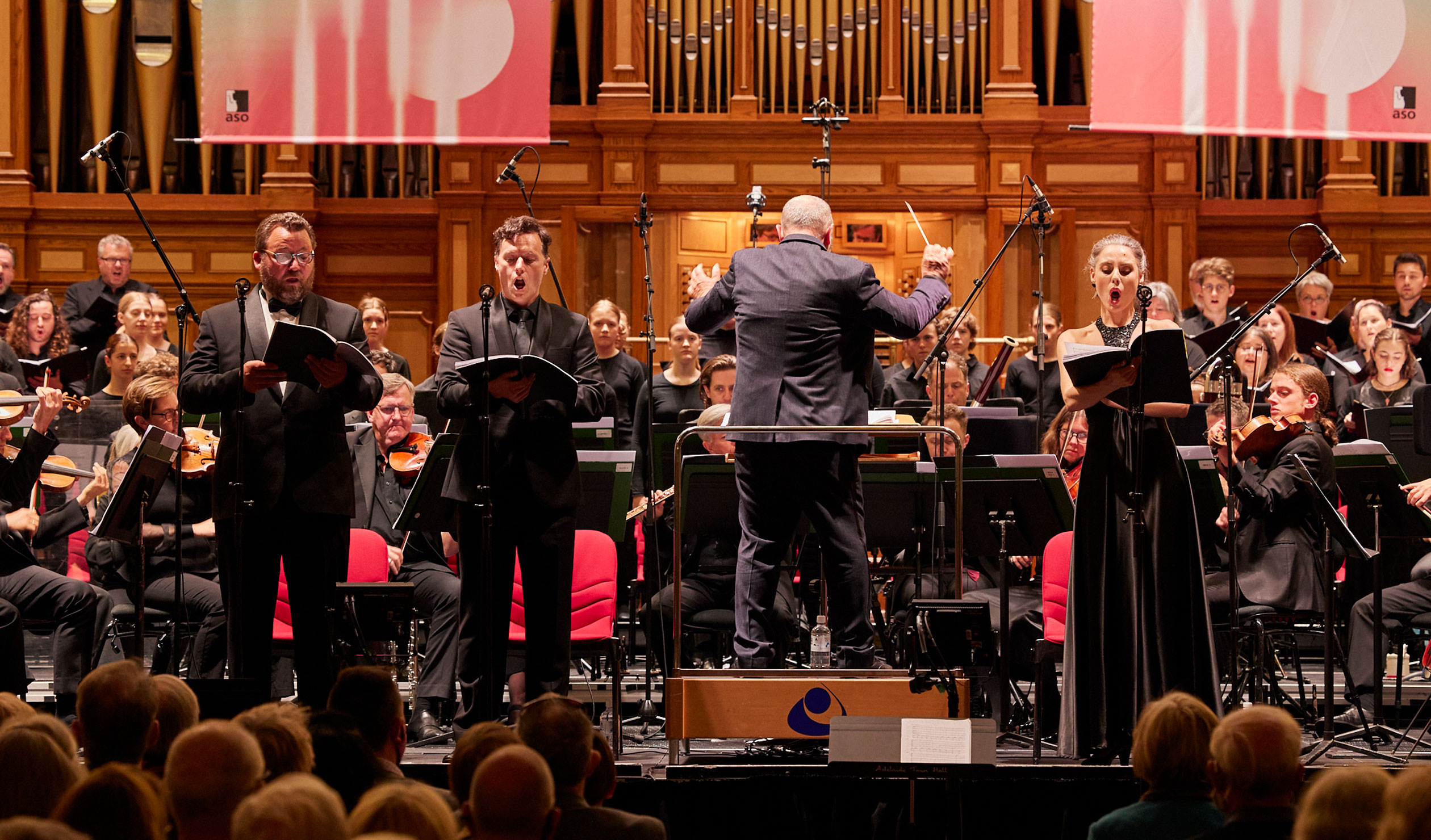 Soprano Desiree Frahn, tenor Andrew Goodwin and baritone Joshua Rowe are tonally gorgeous and well matched. Adelaide writer-restaurateur at Parwana, Durkhanai Ayubi, narrates the gospel readings very clearly, and the choral singing from Adelaide Chamber Singers, Young Adelaide Voices and Graduate Singers is wonderfully well rehearsed. Under Mills himself as conductor, the ASO plus all these extra personnel (making around 160) turn in a gripping and committed performance.

An inspired touch is the addition of handbells. In Part III, eight young bellringers line up in front of the stage and wave their bells (about the size of Cornetto ice-creams) to Tennyson’s poetry that calls for a thousand years of peace. Amen to that.

An unusual year deserves to be marked an unusual way, and the Adelaide Symphony Orchestra is to be applauded for commissioning this marvellous work and giving its first performance. ABC Classic, which recorded this concert, will broadcast it on December 18. 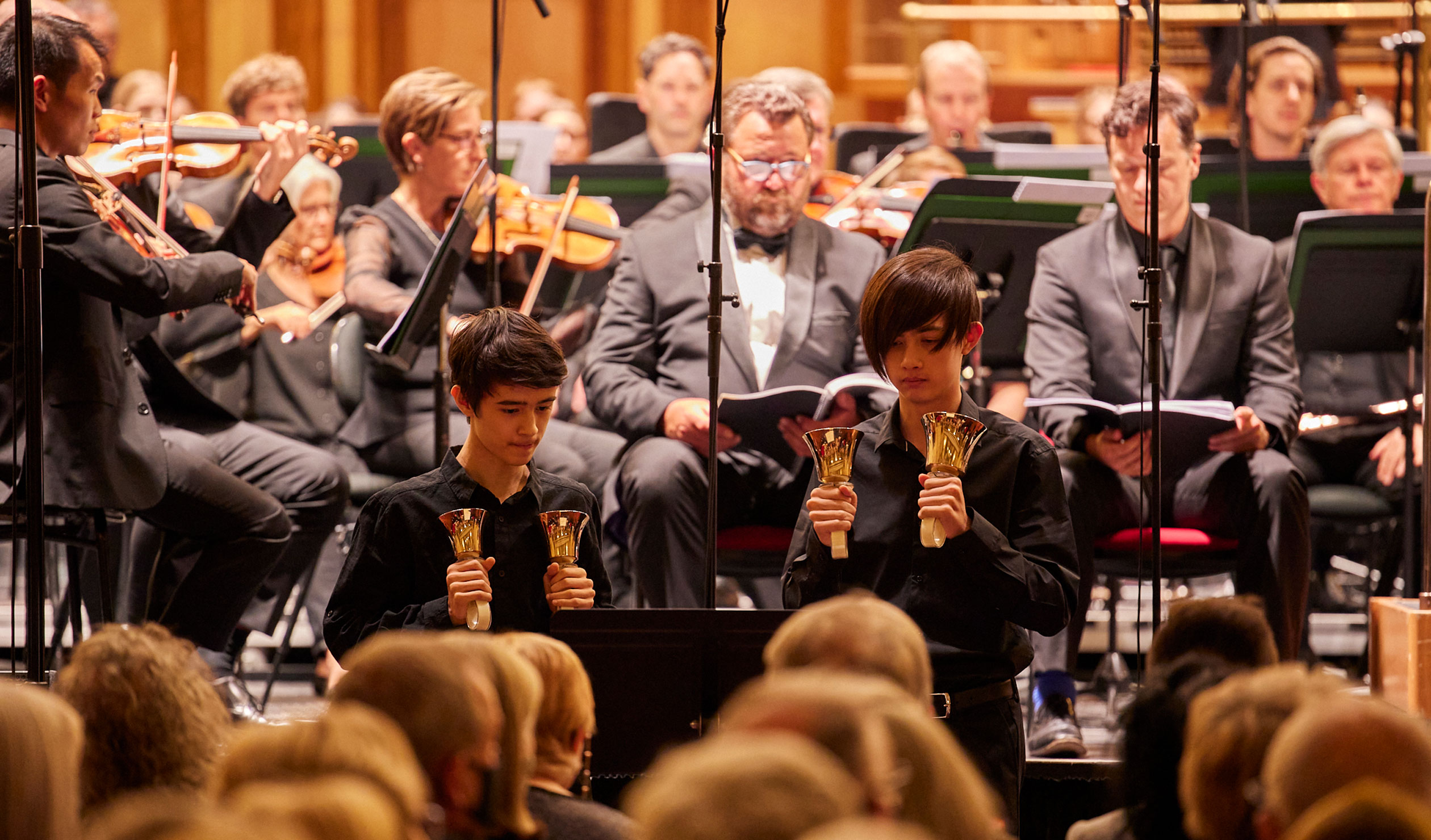