To gain its full impact, Carmina Burana has to present a thunderous wall of sound. Carl Orff was a sort of Phil Spector of the classical world, if you like, devising the idea of massively stacked-up instrumental and vocal sound three decades earlier than the American record producer.

Those big choruses like “O Fortuna” and “Ecce gratum” call for a Wagnerian-sized orchestra with two pianos and a monster percussion department, together with more than 100 singers.

The prospect of hearing Orff’s mighty score over the kind of paltry sound systems that the Adelaide Symphony Orchestra has used in the past in its Symphony Under the Stars and Al Fresco concerts did not exactly inspire the greatest hopes. But then, as earlier concerts have shown in its new Festival of Orchestra series, organisers have made fine efforts in ramping up sound quality and giving patrons a thoroughgoing concert experience in the outdoors.

To see 270 musicians assembled on stage was quite a sight itself, but as soon as the first timpani blow struck in “O Fortuna”, Carmina Burana’s force hit with satisfyingly brutal strength. And then, as it immediately fell into a hush with the desolate words “hateful life treats us badly then with kindness, making sport with our desires”, one felt yet more satisfied that this performance was coming to grips with the full emotional import of this work.

After all, for all its exhilarating power, Carmina is a despairing lament about the ill fortune that can befall all of us.

Already this was shaping up as terrific concert – one that was helped, it has to be said, by an excellent English version of Carmina’s Latin and Old German text that was projected onto screens either side of the stage.

A conductor might well quake or wilt under the sheer size of this work, but not so Luke Dollman. As if at the helm of a battleship, he was firmly and completely in control. A videocam right in front of his face showed just how much vigour and energy he put into this performance, and other cameras positioned around the stage showed his assembled forces responding with real dedication. 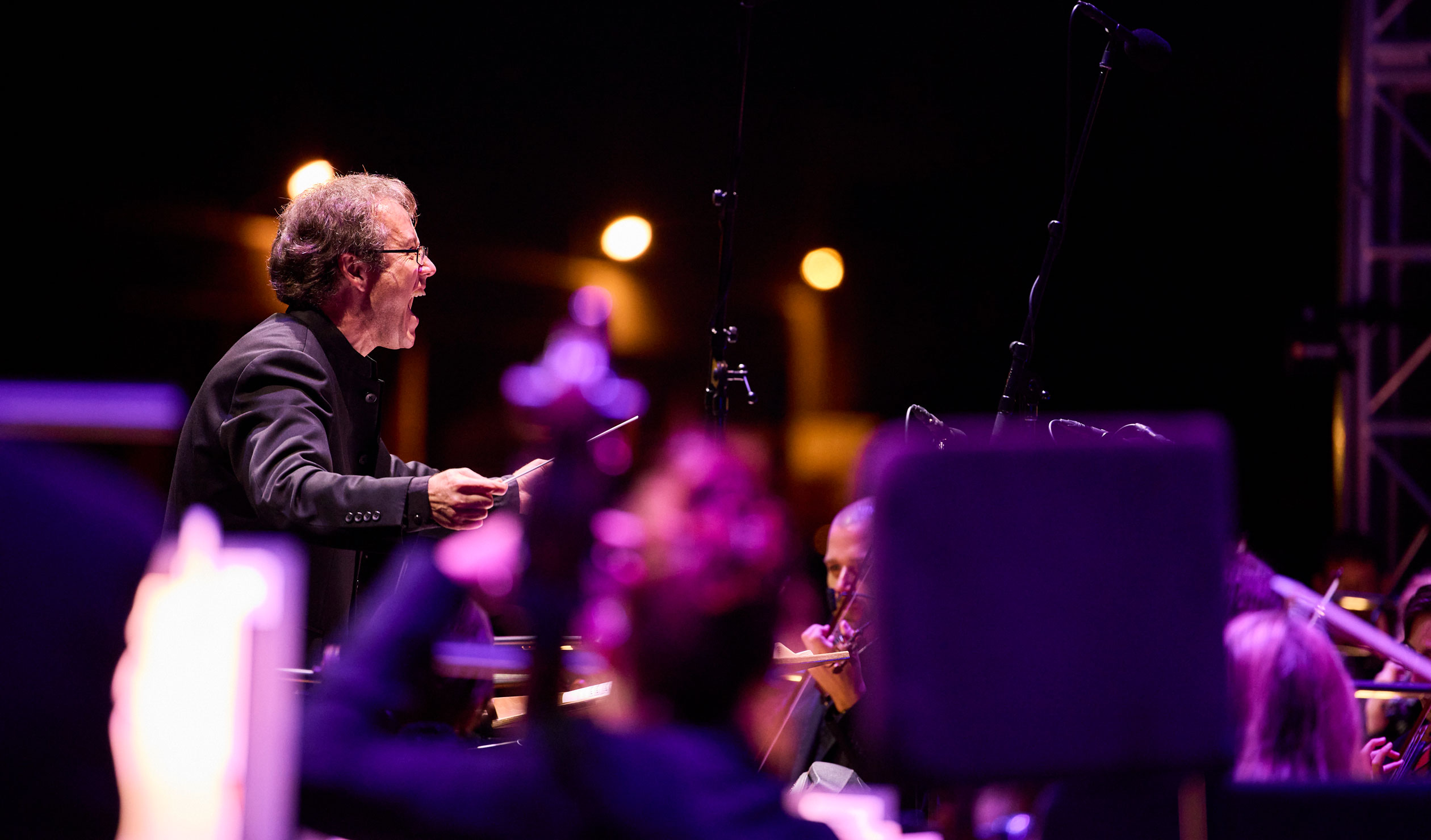 Actually, comparisons with Phil Spector and pop music are not altogether wide of the mark, because the 26 pieces that make up Orff’s Songs from Benediktbeuern (as the title translates) are all of pop-song length, as well as being highly rhythmic.

Dollman delved deeply into their multifarious moods. “Veris leta facies” (The joyous face of spring) was filled with mystery, Tanz (Dance) had an infectious jazzy feel, and “Floret silva nobilis” (The noble forest) had bewitching naivety and sweet Bavarian warmth.

Choruses were all spot-on. Taking many of the solos, baritone Samuel Dundas brought wonderful operatic force to his performances. As the drunken naked Abbot of Cucany, he sobbed and staggered in a comical tavern scene, while in “Dies, nox et omnia” (Day, night and all the world) he wailed tearfully in falsetto range about unattainable love.

Tenor Andrew Goodwin, as the handsome swan who laments his fortunes on the roasting spit, sang with wincing pain in “Olim lacus colueram” (Once in lakes I made my home).

Meanwhile, soprano Jessica Dean was transfixing in her solos as the fair, young maiden standing all alone and “fair as a rose”. Playing to archetypes that hark way back to the 13th century, these were all superb solos worthy of the opera house no less. 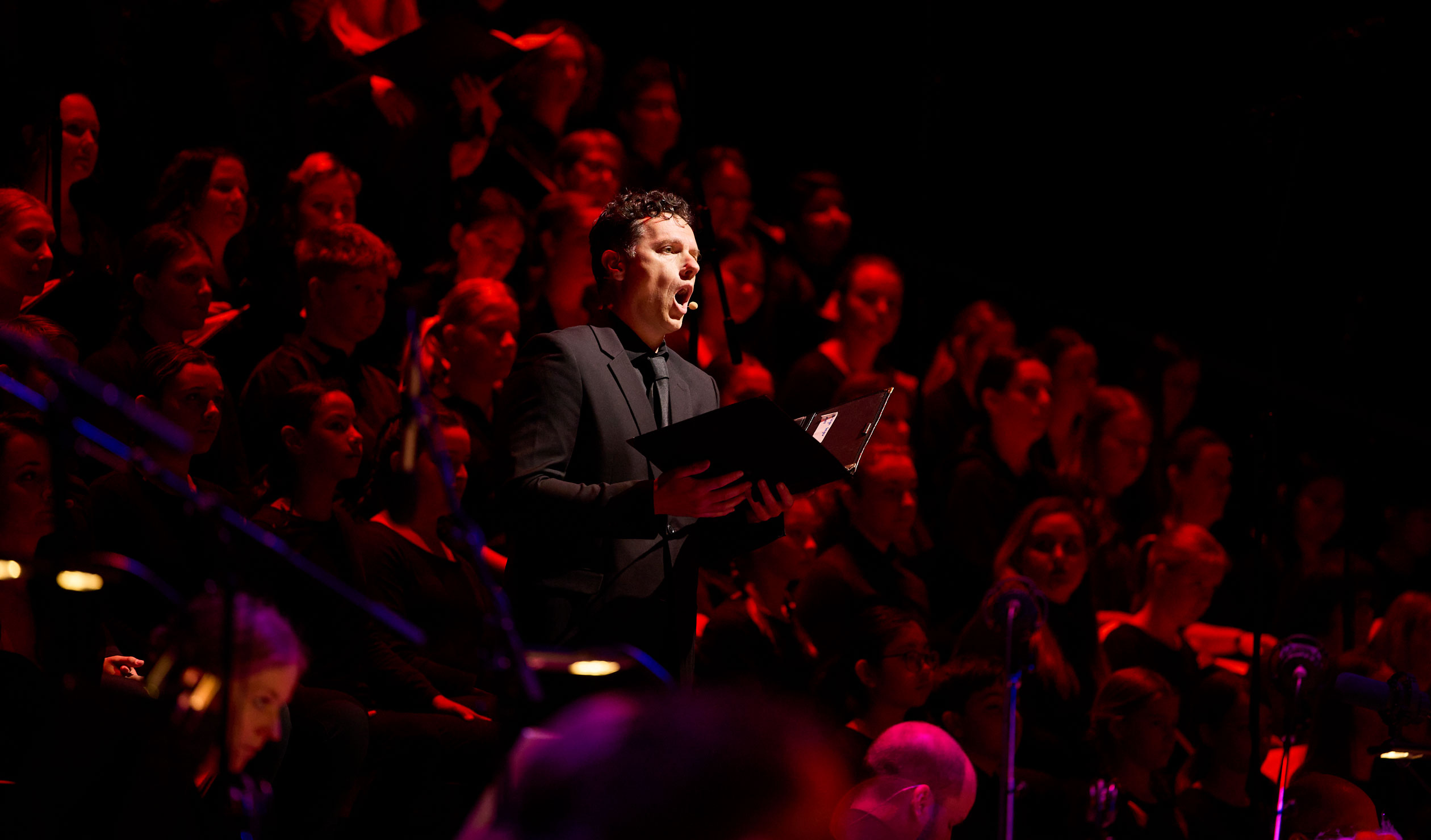 One could only smile at the orchestral playing as well. It was committed beyond anything ASO has done outdoors in previous years. Its players and all 183 choristers have done a mighty job, one that did the work full justice. Dollman deserves special praise for bringing it all together to such a gloriously high standard.

As the medieval wheel of fortune that inspired Orff to write Carmina turns a full circle, and “O fortuna”’ returns at the end, one could only reflect on the heightened similarity between medieval times and the present: humanity seems forever stuck in the hands of fate.

Carmina Burana was presented as part of the ASO’s Festival of Orchestra, which continues until December 4 at the Adelaide Showground. Other upcoming shows are A Night on Broadway (December 1), Symphony of Angels (December 3) and Blue Planet II (December 4).