Lindy Hume’s production of The Barber of Seville for State Opera South Australia is a delightful romp that uproariously brings to life the mischievous liar, womaniser and conman Figaro. It’s colourfully vivacious, flamboyant and, most importantly, extremely well sung. Plus it has a few clever modern touches, too, that hoist this venerable 200-year-old comic opera into the present.

Hume and costumes designer Tracy Grant Lord essentially thrust us back into the era of lords and ladies in 17th-century Spain, into which Figaro swoops as a kind of latter-day renegade rock star. They mill about in their customary cloaks and gowns; but he is decked out in a bright purple jumpsuit and black headband, looking rather like a cross between Prince and Elvis Presley.

Played with incomparable brilliance by baritone Morgan Pearse, this Figaro is a contemporary breakout hero who operates outside the rigid class barriers that confine his comrades. The best moment is when the action freezes, he strides into the auditorium, with the house lights up, and stops momentarily to say a casual “Hi” to one of the audience members in the front row, then proceeds to the stage to deliver the famous aria “Largo al factotum” with dazzling cheek.

Pearse is consummate in this role both vocally and acting-wise. Striking an outstretched Presley pose at the end, he is every bit an updated version of Brighella, the precocious masked servant from the Italian Commedia dell’arte who gave Rossini his inspiration to write The Barber of Seville in the first place, courtesy of Beaumarchais’s 1773 play. 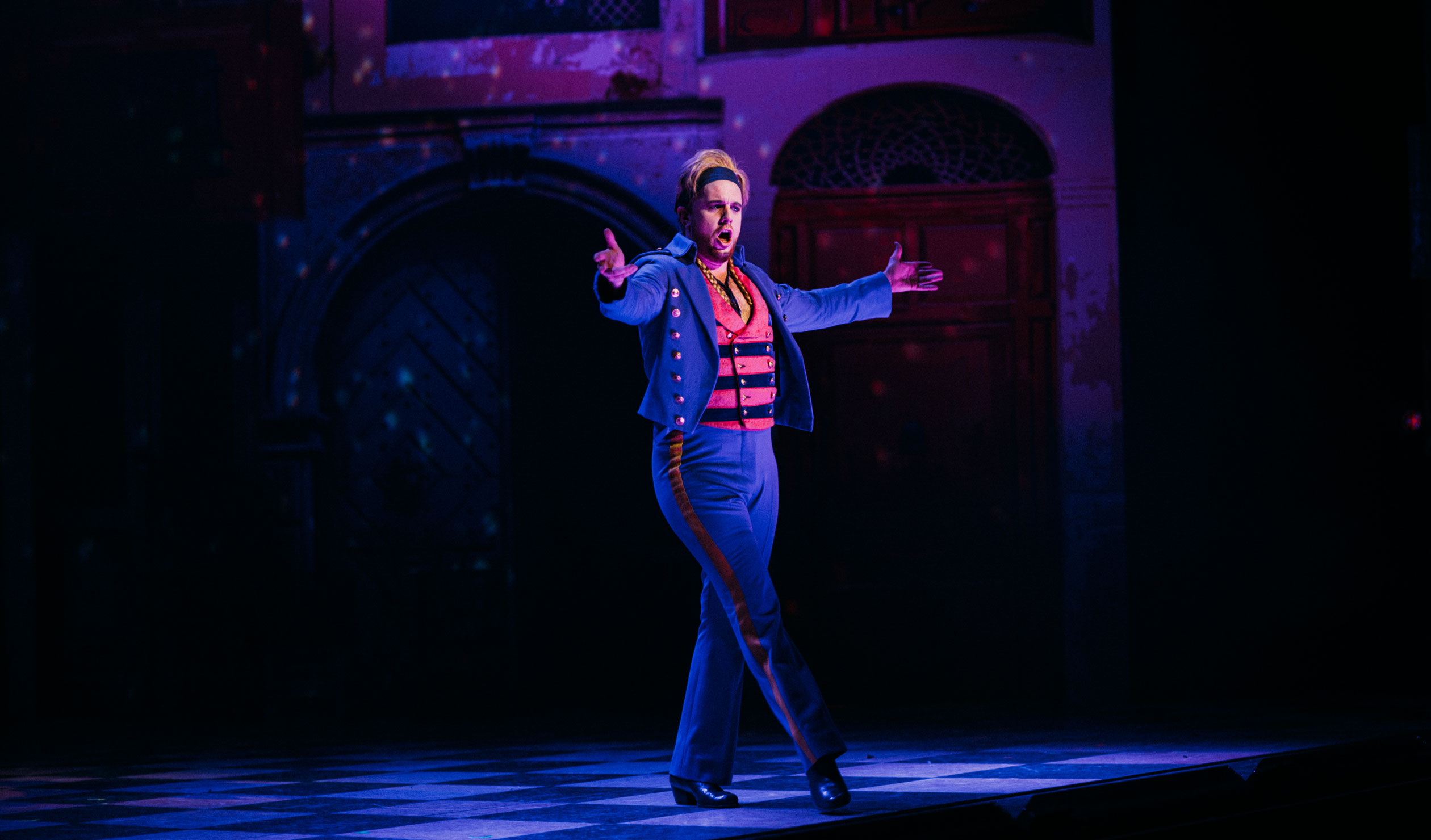 Nearly stealing the show later on is bass Douglas McNicol as Doctor Bartolo. He is the stern housemaster who locks away the young Rosina for his future wife – and whom Figaro mocks by lathering shaving cream all over his face and on top of his bald head. McNicol, always a favourite in State Opera productions, has outdone himself yet again in authority, agility and humour. His falsetto aria “Quando mi sei vicina”, to guitar accompaniment in the second act’s music lesson scene, is riotously funny.

Also bringing great vocal theatrics to the party is tenor John Longmuir as a bright, sparky Count Almaviva. Clear as a bell on the top notes and navigating Rossini’s super-hard coloratura really well, he makes the perfect serenading lover.

Soprano Katie Stenzel settles into the role of Rosina nicely and is right up there with Rossini’s virtuosic floridity as well, although she is underpowered in the ensembles.

In the pit, the Adelaide Symphony Orchestra sounds a little dry, which is surprising given some of their other recent glossy performances in the newly refurbished Her Majesty’s Theatre. Nevertheless, they are as tight as a drum in all the patter songs and choruses. Conductor Graham Abbott brings both meticulous detail and lovely flowing elegance to Rossini.

With a set design consisting of doors stacked on top of each other in wonderfully topsy-turvy fashion, and windows that pop out to reveal the characters’ faces, all the scenes are finely honed. There is never a dull moment. 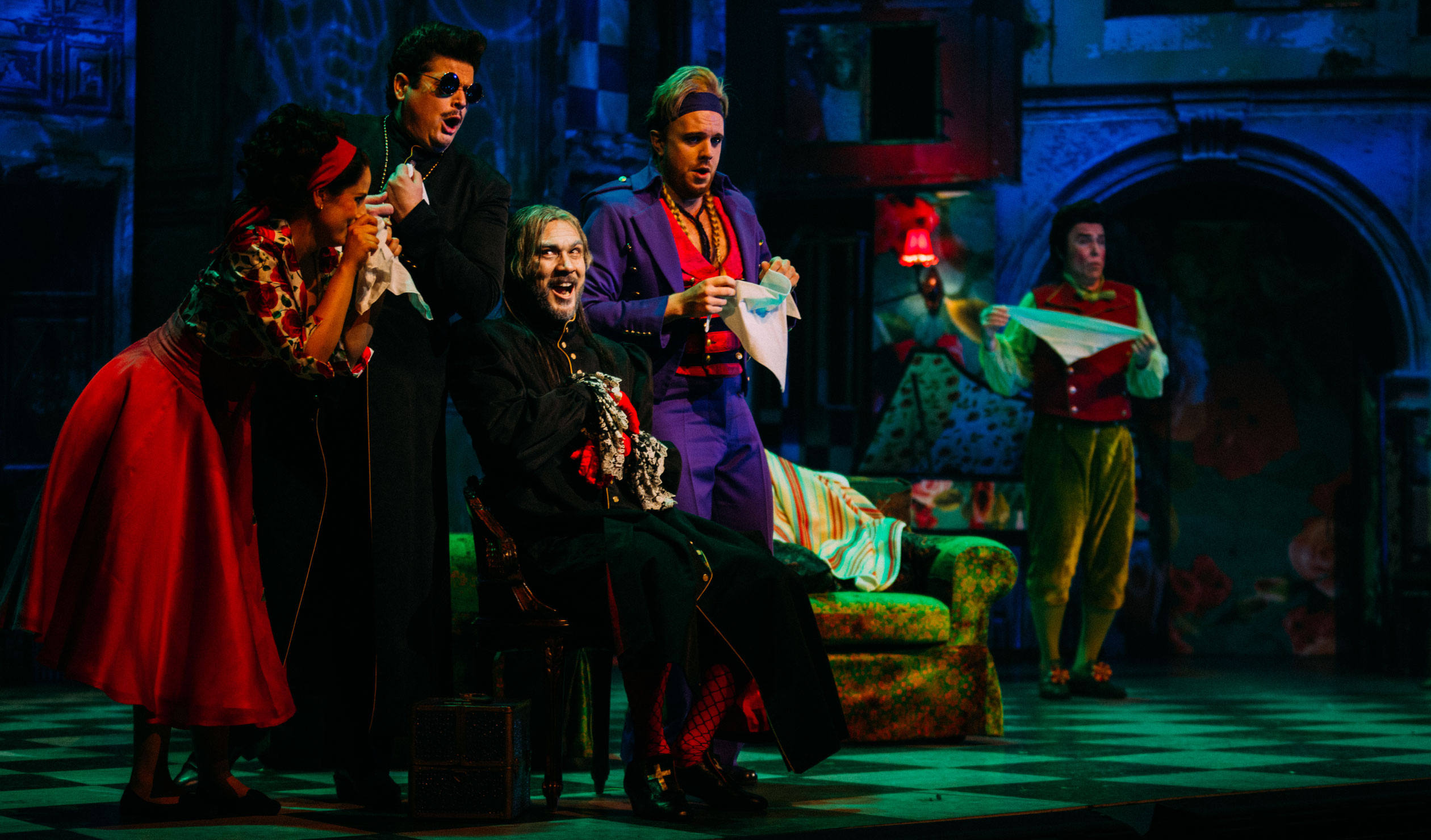 One just has to put up with Rossini’s awful stereotypes. How he typecasts women is unforgivable and a real problem for audiences today, though of course we have to bear in mind that he was writing two centuries ago. When Rosina sings, “I am docile, I am respectful, I am obedient, sweet and loving. I can be ruled…”, it is only partially remediated by her following lines: “But if crossed in love, I can be a viper, and a hundred tricks I shall play before they have their way.”

More of the viper would not have gone astray. One truly enlightened moment comes when the maid, sung in fine style by Teresa LaRocca, grabs a bottle of whiskey and settles back for a drink while she reflects on the insanity and torment of the love games going on around her. Addressing the audience directly as she sings, rather like Figaro, her words make the other characters look like puppets and deliver much welcome authenticity to the production.

Other secondary characters are terrific – which always helps in any comedy. Pelham Andrews is spot on as Don Basilio, Rosina’s music teacher, and Nicholas Cannon is extremely funny in the role servant role of Ambrogio. At one point he desperately hangs upside down from a chandelier, completely unnoticed by the others.

The choruses are sharp and shiny, adding wonderful liveliness to the crowd scenes and making this Barber quite a blast. It is one to really enjoy.

The Barber of Seville, presented by State Opera South Australia, runs until November 20 at Her Majesty’s Theatre.