Featuring music and lyrics by Stephen Sondheim and a book by Hugh Wheeler, the show about a murderous London barber was originally to be presented in 2020 but was one of several SOSA productions postponed due to COVID-19.

State Opera artistic director and Sweeney Todd theatrical director Stuart Maunder says that “from the first words ‘attend the tale of Sweeney Todd’, we know we are in for a ‘fright night’.”

He describes the cautionary tale as “deliciously scary; dark, sinister… and thrilling”.

Maunder originally created the production for Victorian Opera, and it has also been performed in Melbourne, Perth, and New Zealand.

“The piece is without doubt one of the most powerful, dramatic, and theatrical horror tales ever set to music,” he says.

“And all the more thrilling in that for all its melodrama, blood and gore it tells a very universal human story: Revenge, obsession and lust, yes, but also pain, yearning, even love.” 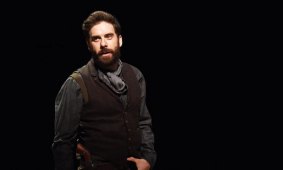 ‘Lost opera’ Voss to return to the Adelaide stage in 2021

In light of the uncertainty surrounding the pandemic, State Opera is making a series of rolling announcements about its 2021 season rather than launching the full program at once.

It has previously announced two other shows – Carousel: The Concert, also starring Mingay, and the Australian opera Voss, which is part of its Lost Operas of Oz series – and plans to release details of further shows in January and June next year.

Sweeney Todd will be presented from May 8-15 at Her Majesty’s Theatre.