Voss was composed by Richard Meale with a libretto by writer David Malouf, and is being revived through what is described as a “passion project” by State Opera SA and Victorian Opera.

State Opera will present it as a staged concert at Her Majesty’s Theatre on September 17 as part of its Lost Operas of Oz series.

“The presentation of Voss is a long-anticipated thrill,” says SOSA director Stuart Maunder.

“I’ve loved the novel since I studied it in high school (who didn’t?) and the opera since I learned it by osmosis when my then-wife sang in the original cast.

“I stood for it on the opening night here in Adelaide in 1986, and I’ve tried to program a revival since that time.” 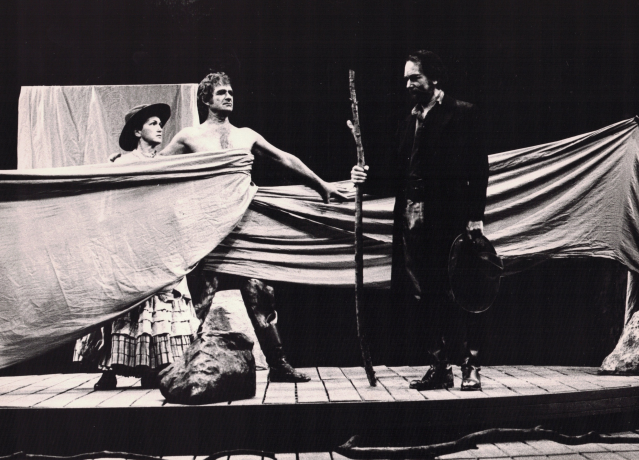 A photo from the 1986 production of Voss, shared earlier this year by Opera Australia as part of its 50 Years in 50 Days project.

The opera was originally commissioned by the Opera Australia and premiered at the Festival Theatre as part of the 1986 Adelaide Festival, before touring to Sydney and Melbourne.

White’s 1957 novel of the same name was inspired by German explorer Ludwig Leichhardt, who disappeared while on an exhibition in outback Australia around 1845.

SOSA describes Voss as a moving exploration of the outsider, and ultimately a love story that transcends time and place.

Baritone Samuel Dundas will take on the role of Voss in the new production, while soprano Emma Pearson plays Laura, the young woman he secretly loves. It will be presented with an all-Australian cast, the Adelaide Symphony Orchestra and the State Opera Chorus.

Maunder considers the opera’s score to be “one of the most tuneful, accessible, grand and romantic” ever composed in Australia.

“It is epic, admirable, thrilling, lush; grand opera at its most intimate, speaking as it does of man’s constant struggle with the land, the infinite, the self. An opera defiantly of our time and place.”

SOSA’s Lost Operas of Oz series shines a spotlight on important Australian works lost to time. The latest production in the series, Summer of the Seventeenth Doll, an adaptation of Ray Lawler’s 1955 Australian play of the same name, had its season cut short last week due to the new COVID-19 restrictions.

Earlier this month, the company announced that it will open its 2021 season on March 26 with Rodgers & Hammerstein’s Carousel, headlined by Sydney-based actor and singer Ben Mingay.