Our minds are both a burden and an asset. Everyone navigates their sense of self through the objective realities of circumstances and events, and it is the mind doing the navigating. From moment to moment, circumstance to circumstance, our minds are interpreting our way through life, and what the mind thinks is either burdensome or helpful.

Recent research in Canada suggests we think around 6000 thoughts per day. This number is disputed, with other research suggesting 10 times the number. Either way, it’s a lot, and it’s not to suggest we think this many individual topics per day. It hasn’t been properly researched yet but we probably have only about 50 to 100 topics.

Repeated thoughts on the one topic is rumination, which is known to lead to poor mental health.

Research also shows that most thinking is negative, and nearly all of it focussed on past experiences, or speculation about things that might or might not happen in the future. So, was Hamlet was right when he said:

…for there is nothing either good or bad, but thinking makes it so?

We need not be captive of our free-wheeling, monkey-like, chattering brains, though.

One can also generate more thoughts of gratitude which, interestingly, has the unintentional consequence of increasing a sense of ease when dealing with life’s challenges.

Compassion, kindness and gratitude are proven to lead to pro-social behaviours, contribute to good physical and mental health, and enhance the quality, and length, of a person’s life.

For many reasons, we’re not all naturally disposed to such qualities. We can, however, learn to be more kind, compassionate and grateful, and we can practise these and other qualities so that they come to us as second nature. How? Meditation. Research shows that through meditation our minds can softly shift to preferred states of thinking and being.

When we meditate we shift our attention away from the ceaseless chatter going in our minds and focus on a particular object or concept; sounds, a colour, our breath, a philosophic wisdom.

While meditating, we observe that our minds are addicted to thinking about things other than the object of our meditation. The mind quickly gets bored and reverts to topics of its choosing rather than ours. It can be an arm wrestle.

Watching ourselves think requires a watcher and a thinker; this is known as the “dual mind”. The watcher is generally less invested in the actual thought while the thinker is so absorbed in the thought that they become it. Becoming the thought can be counter-productive, as when we get angry. Negative things arise in our lives as a result of mindless anger.

At any given point in a conscious day, which one are you?

Knowing that the two states exist at all is a good thing. Furthermore, knowing what you are thinking and observing how you feel about those thoughts from moment to moment is the challenge. Being aware of one’s mental state is one thing, knowing how one feels about that state, and determining whether to allow it to continue or not, is another; that is mindfulness. When we are mindful we are fully present, conscious or awake.

Meditation is a shower for the mind; refreshing and restorative. It also helps us access the deep peace and calm which resides within us. 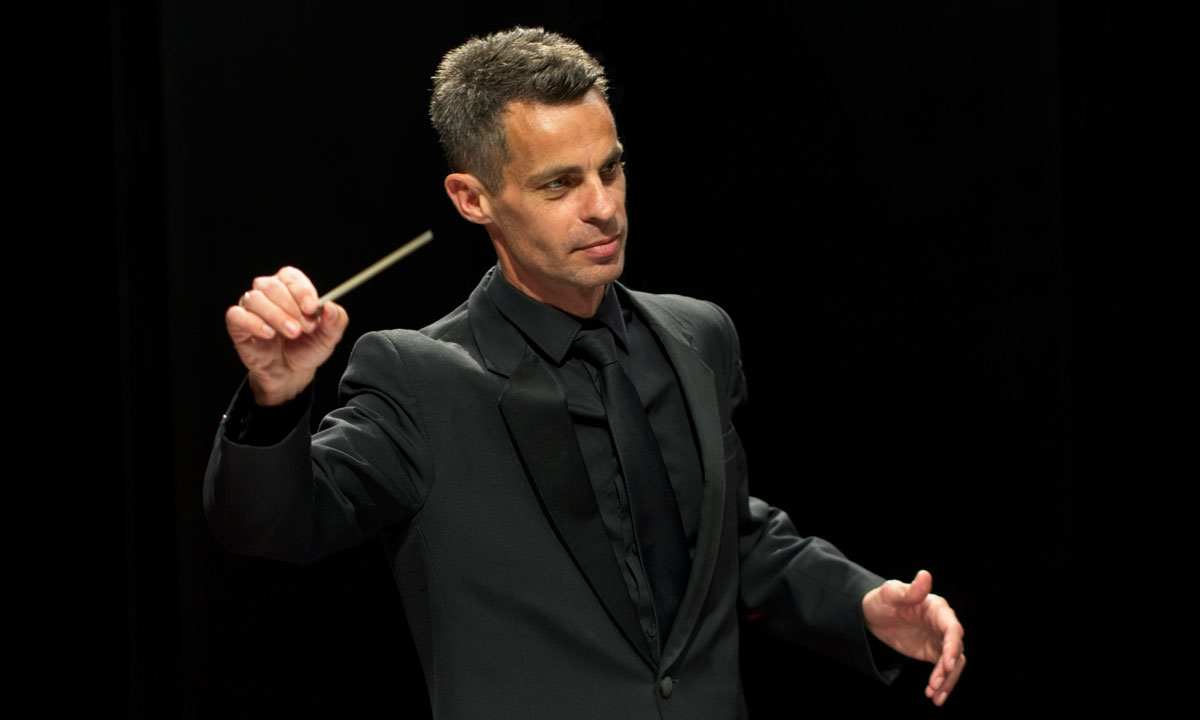 In a wonderful first for Australian symphony orchestras, the Adelaide Symphony Orchestra has launched a series of six online meditations and music concerts conducted by by David Sharp and featuring works by Elgar, Dvořák, Schoenberg, Pärt and local composer Graeme Koehne. The series concludes with an extraordinary work by percussion virtuoso Gene Koshinski.

This project is a gentle gift to the community. An anonymous grouping of synthetic music on a Spotify playlist is one thing, but a group of fully present ASO musicians dedicating their artistry to an audience for meditation is a beautiful gesture; especially now.

Each setting of no longer than 10 minutes will be preceded by a text taken from Buddhist, Hindu, Christian and Confucian traditions, supported by contemporary, science-backed understandings of mental wellness. They will provide simple life wisdoms to reflect upon as an accompaniment to the carefully chosen music.

If nothing else, each meditation will generate abiding calm and stillness.

The Chinese Taoist philosopher Lao Tzu is sometimes credited with the writing of the enigmatic book of thoughts, the Tao Te Ching (6th century BCE). Scholars debate the book’s timing and authorship. In the end, of course, the debate doesn’t matter. What matters are the wisdoms it contains.

The ASO’s Meditation Virtual Concert Series is available to view on its website. The first concert, released on Saturday to coincide with World Mental Health Day, features Graeme Koehne’s To His Servant Bach, God Grants a Final Glimpse: The Morning Star. New pieces will be released each day until October 16, with the series also featuring Edward Elgar’s Sospiri, Op.70; Arvo Pärt’s Cantus in Memory of Benjamin Britten; Antonín Dvořák’s Nocturne for Strings in B Op.40; Arnold Schoenberg’s Nocturne for Strings & Harp, and Gene Koshinski’s And So the Wind Blew…

Rainer Jozeps has been an executive in Australia’s arts industry for more 30 years, holding senior roles with the Australian Elizabethan Theatre Trust, Adelaide Festival Centre, West Australian Ballet and Adelaide Symphony Orchestra. He has been a meditation practitioner for 15 years, is a meditation guide for a local Buddhist centre and is a Lifeline crisis supporter.