At 27, Emma Gregan is the “baby” of the ASO’s horn section in terms of both her age and her time with the orchestra, having joined just four years ago.

Gregan is currently part of the Adelaide Symphony Orchestra’s Virtual Concert Hall series. When she’s not making music, you’ll find her  writing her thesis – which has become a priority during the break in regular concerts caused by COVID-19 – or “bouldering” (indoor rock-climbing without ropes).

Here, in the vein of BBC Radio 4’s Desert Island Discs, Gregan nominates the top eight pieces of music she’d want for company on a desert island, plus a book and luxury item perfect for isolation.

I became really interested in early music and historical instruments during my under-graduate studies. I got to hear a semi-staged Orfeo by the Australian Brandenburg Orchestra on a trip to Melbourne and thought it was absolutely incredible. I love Baroque opera and you can’t beat a really great counter-tenor.

2. Everything Little Thing She Does Is Magic – Jacob Collier

I wouldn’t normally pick a cover over the original song but this one is so sweet and sparkly, it’s hard to go past. It gets extra points for having an orchestra in it, too. Basically, anything with [English singer, multi-instrumentalist and composer] Jacob Collier in it has my vote – he seems like such a ray of sunshine and I’m dying to meet him!

If they ever open a classical music nightclub on Hindley Street, they’ll probably play this – it’s a great dance number. I heard the Australian Chamber Orchestra recordings of the last Mozart symphonies on the radio and was blown away by the energy and clarity. I love that I can say my favourite Mozart symphony recordings are Australian.

This is another car radio find. I was nearly late to teaching a lesson so I could hear it out to the end because it was so beautiful. I’m very attracted to folk music and this is a gorgeous Celtic song with some pretty incredible singing by Canadian counter-tenor Matthew White.

This is probably one of my absolute favourite movements of any symphony; it’s so explosive and joyous. My horn teacher introduced me to the Beethoven symphonies when I was about 11 or 12 years old and lent me the [conductor Nikolaus] Harnoncourt recordings with the Chamber Orchestra of Europe, which are still my favourite today. The 7th Symphony was the first one I listened to and I remember being shocked by the sound and turning it up as loud as it would go so that it would feel like I was sitting inside the orchestra.

I love Billie Eilish – I think she’s so cool. In fact, I adore young musicians across any genre; it’s amazing to see new generations of musicians finding their voices and I think there’s something very raw and honest about what young people create. She recorded this when she was 14, which blows my mind. It makes me a little bit nostalgic for high school romantic drama!

7. The Chairman Dances, from the opera Nixon in China – John Adams

I played this at an Australian Youth Orchestra national music camp as a teenager. I love all the different colours of sounds, the machine-like rhythmic quality of the piece and how the groove kind of melts into a new one and back out again: it’s busy and hypnotic, which is a wonderful combination. It’s great fun to play, too.

The first CD I ever owned was the London Horn Sound disc, which my primary school brass teacher gave me. This is the first track on the disc: hearing 16 horns playing together like this is totally life-changing when you can only play “Hot Cross Buns”. I pretty much decided then and there at the age of eight that I was going to be horn player.

Book: The Five People You Meet in Heaven, by Mitch Albom. I’ve read this book a few times now and I’m not much of a re-reader of books. It’s a simple and lovely book about the inter-connectedness of people and the power we have to change the course of the lives of others.

Luxury item: Really good skincare products – I think the desert island could be pretty harsh on the skin and I really don’t need any more freckles on my face! 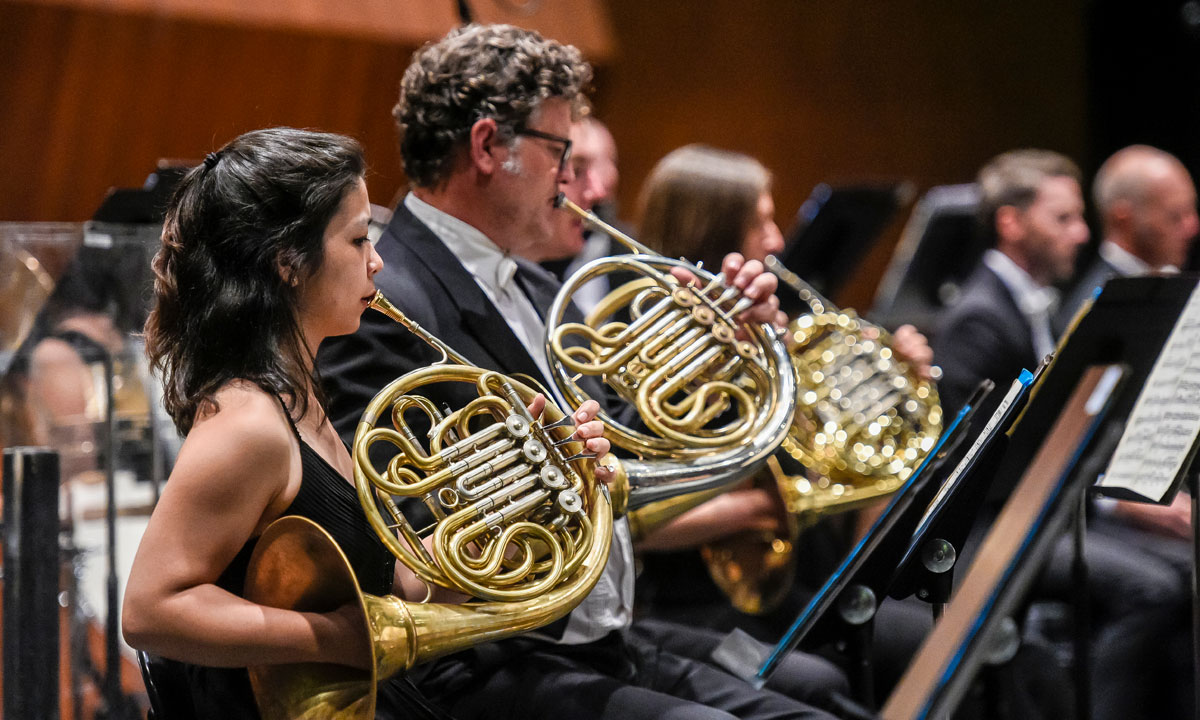 Emma Gregan during a pre-pandemic concert performance by the ASO.