Initially, I wondered if the title was a reference to the Trump era, the rise of extremism, catastrophic climate change and heightened global tension. These are, after all, dangerous times. Reading the news on my phone has become a daily exercise in existential crisis.

Today, the sense of danger all around us has risen exponentially as our seemingly indestructible world shuts down, victim to a menacing, insidious, killer pandemic.

It is a most dangerous age.

This album is one of those rare but memorable instances where art is created before a significant event occurs but its release coincides with that event and it becomes forever associated with it.

Think of Wilco’s album Yankee Hotel Foxtrot. It was written and recorded before September 2001, with the cover featuring two towers in Chicago known as the Marina City towers.  The album was released seven days after the terrorist attacks on New York’s own twin towers, the World Trade Center. Although the lyrics and music explore personal themes, the album’s feeling, tone and cover represent that moment in time when the world stopped in terror, and then had to cope in the aftermath. It helped people deal with their shock and grief.

In the same way, The Dangerous Age will, for me, forever be tied to this moment in time; a symbol of these dangerous times, in which we shelter in our homes to avoid contracting or spreading a deadly virus, and how we cope.

This is music as coping mechanism.

Michael Jordan once said: “I’ve missed more than 9000 shots in my career. I’ve lost almost 300 games. 26 times I’ve been trusted to take the game-winning shot and missed. I’ve failed over and over and over again in my life. And that is why I succeed.”

In the Australian music pantheon, Kate Ceberano is the ultimate risk taker.

In my liner notes for her 1999 retrospective album True Romantic: The Best of Kate Ceberano, I wrote that she was “like a child who chases a butterfly along a precipice, blissfully unaware of the drop below”.

Little has changed in the 20 years since. 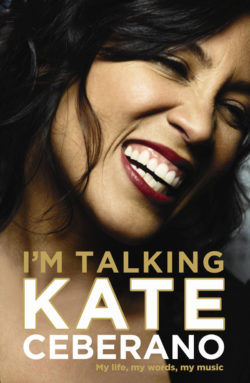 Most music industry heavyweights don’t “get” her. Why she hasn’t been willing to just stick to one thing is something they will never understand. How are they supposed to market her?

It has never entered her mind to play her cards right.

Her creative choices seem unconscious. Forever chasing her muse, she remains open. She is a work in progress, never stopping to look back, never calculating or triangulating. She is living in the moment, dancing in the eternal now.

This new album is a case in point.

Is there any other artist who would follow an award-winning jazz album of torch ballads (last year’s Tryst) with an indie rock record?

The Dangerous Age is not just any indie rock record.  It’s one for the ages.

The first track’s beguiling verses give way to the central mantra – “you’ve got me all tied up” – which is repeated over and over and over in the foreground of an emotive wall of sound, guitar solos stirring while the voices search for, and find, truth in every repeated line.

The second track, “Monument City Lights 1973”, prolongs the spell cast by the first. It is a most affecting song. I have no idea what it’s about. But I know how it feels. It’s night, I’m walking, the streetlights are a blur and the past and the future are colliding. I’ve made mistakes. I’ve learnt from them. Or I convince myself I have. And I’m recovering, still hoping to make something of my life. 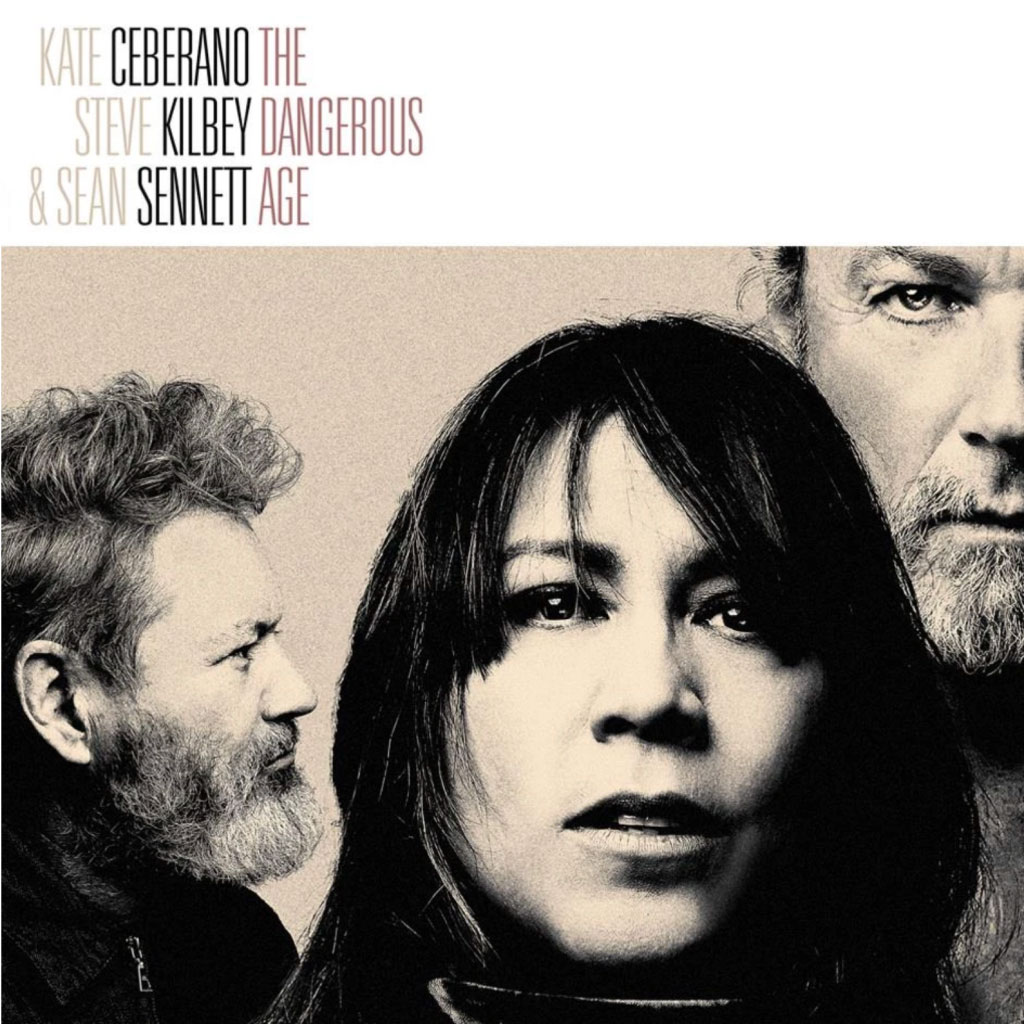 This album is a first-time collaboration between Kate Ceberano, Steve Kilbey (lead singer/founder of The Church, writer of the classic “Under the Milky Way”) and Sean Sennett, a long-time friend of Ceberano and indie musician in his own right.

One of its sumptuous secrets is the salted caramel that’s formed by combining the voices of Kilbey and Sennett with that of Ceberano. Heartache and butterflies ensue.

Ceberano’s voice sounds different from her past. It’s grittier. She is still the dreamer she always was, but she is older, weathered by experience, by loss and failure. All pretence is gone.

At times, there is a glimpse of the girl we once knew, bounding hopefully. At others, she channels the darkness of her deceased friend and idol, Chrissy Amphlett. None of it is derivative, however. It’s all Ceberano.

The transformation reminds me of Billie Holiday’s vocal change in her later years. The earlier lustre has been battered by the elements and begun to corrode. The veneer has chipped away. The timber is exposed.

You don’t know what love is
Until you’ve learnt the meaning of the blues.

All those risks she has taken, the failures and the triumphs, wearing her heart on her sleeve with no thought for self-preservation, are felt.

The central theme of this album is deeply existential. “The dangerous age” is the age you reach when the deciders and the pundits have determined that your best days are behind you. It’s not that they speak poorly of you. It’s that they don’t speak about you at all.

You’re a CD in a flea market, in your second half-century, nearer to the end than the start.

How much longer are you going to survive?

Can you produce one more hit before you go?

The last verse of the title track captures it perfectly.

Sounds like a surrender? Wrong. Ceberano retorts with an inspired counter-attack.

Think about that silence
In John Cage

She and her sidekicks find solace, inspiration and power in silence. The kind of silence that sits within songs and is deeper than the notes played. Listen to much of what’s around today and you won’t find it.

It reminds me of Daisy Loongkoonan, an artist I once met at the Art Gallery of South Australia. A quietly spoken elder of the Nyikina people in the remote Kimberley region, she started painting when she was 95. By the age of 105 – when I met her – she had become an internationally acclaimed artist.

Who is willing to place limits on greatness by reference to an artist’s age?

In a world where human beings are measured and valued by their metadata, Ceberano, Kilbey and Sennett are artists who have been forgotten in favour of shiny new things (or shinier old things who played their cards right).

Does this make them endangered? Hardly. The opposite is true. They are more dangerous than ever.

They have nothing to lose.

Mortality tales are everywhere on this album, handed along from song to song like a marshmallow stick around a campfire, each song facing the flame from a different angle, finding new melodies in which to tell our story.

“Shot From Memory” is acted out like a scene in a Quentin Tarantino film, a bewitching substitute for Ricky Nelson’s “Lonesome Town”.

The singers appear resigned to their fate. Not so. With music this powerful, they’ve become more vital than ever.

Interspersed among these shadows are bursts of sunlight, where Ceberano springs forth into joyous McCartney-esque escapades like “My Restless Heart”.

Think of Lennon singing “She said, she said, I know what it’s like to be dead” at the end of side one of Revolver and then you flip the record over and hear McCartney’s exquisitely happy “Good Day Sunshine” kick off side two.  The same chiaroscuro dwells here.

By the time we get to “Girl On The Highwire”, Ceberano has become Gelsomina in Fellini’s La Strada.

The morning sings behind me
As I stroll on into town
The buttons on my coat
Keep dragging all my fingers down
Quickly, like a circus dog
Now everyone’s a clown
Oh, the girl

The horses with their bridled fury
Trot round an empty ring
The old ballet of yesterday
Has been replaced by the newest thing
Yes, the net has gone
And maybe now this girl can sing
Oh, the girl

“Girl On The Highwire” is an update on McCartney’s “Fool On The Hill” – a longing tribute to the artist as “fool”.

The next song, “So Long Ago”, with its “Penny Lane” inflections, again takes the hopeful, nostalgic feel of Beatle Paul and holds it up to the mirror of mortality.

Who were those people we once were, so long ago?

Do you remember when we were something, once? Does anyone remember?

The life of the artist is tenuous.

Ceberano is, always was, and always will be, the girl on the highwire.

With this album, she has become the anti-diva. And yet she remains the star of the show. She leads the singing, is the producer of the album and has co-written the songs.

In a fascinating twist, she has written the music here, not the lyrics. Her male collaborators sent her their poetry and she created the music for their words.

In an era when the album as art form no longer has the currency it once had, Ceberano and her co-stars have renewed its relevance.

The Dangerous Age is the crowning achievement of Kate Ceberano’s career as a recording artist.

To have done it with such an off-beat, enchanting album is an advertisement for the benefits of collaboration. Sennett and Kilbey have squeezed the very best out of her, and she out of them.

Meanwhile, the alchemist in the laboratory is co-producer and multi-instrumentalist Rod Bustos, whose work here is masterful at every turn. The guitar playing alone is worth the price of admission. The soundscape he has created with Ceberano is rich yet understated.  Not a note is wasted; no instrument is out of place or overstays its welcome. This is also a testament to the musicians who play on the record. Their contribution is an exercise in effortless, minimalist magic.

After a lifetime of risks, failures and triumphs, with this work Ceberano has, seemingly by accident, dug up deeply held truths that are buried inside us and revealed them in a new way.

This is when art is at its most profound.

This is one of the most profound new albums I have heard in a long time.

Epilogue: Common sense dictates that, given the results achieved here, Ceberano’s next two albums will be written and recorded with the same team, turning The Dangerous Age into the first volume in a trilogy. However, given her highwire tendencies, I expect the next album to be a disco record! We may end up dancing to it in isolation, locked away in our homes, but we mustn’t ever stop dancing.