Premiering in 1904, Giacomo Puccini’s opera continued the momentum of Japonisme born from the European fascination with Orientalism and exoticisation all things Japanese. It’s based on the true story of a young girl seduced and deserted by an American naval officer in Nagasaki; the real O-chō San was ostracised by her community and abandoned to a fate of poverty and suicide.

In Puccini’s rendition of the tale, American Lieutenant BF Pinkerton (Angus Wood) arrives in Nagasaki to take possession of a house and a 15-year-old wife of exceptional beauty, Cio-Cio San (Mariana Hong). Disrespecting Japanese tradition, he walks about with shoes on in the house, boasting to the matchmaker Goro (Adam Goodburn) of the ease with which he can sail away from every girl he seduces and of his goal to capture every “flower” until he has a “real American wife”.

Innocent and trusting, Cio-Cio San revels in her marriage and, renouncing her religion, she devotes herself to Pinkerton as her “god”. Despite the warnings of the US Consul, Sharpless (Douglas McNicol), Pinkerton abandons her soon after his seduction. Disowned by her community, she waits for his return, increasingly destitute, with only the companionship of her faithful servant Suzuki (beautifully played by Caitlin Cassidy) and a son she names Sorrow (Nate Bryant).

When Pinkerton finally returns after three years, it is with his American wife (Bethany Hill), who wishes to raise Sorrow as her own. Too cowardly to face Cio-Cio San, Pinkerton runs away, leaving his wife to persuade Cio-Cio San to give up her son for a better life in America. Cio-Cio San’s love for her son convinces her to do so, knowing his future in Japan has been forever blighted. Bereft and in despair, she takes her own life. 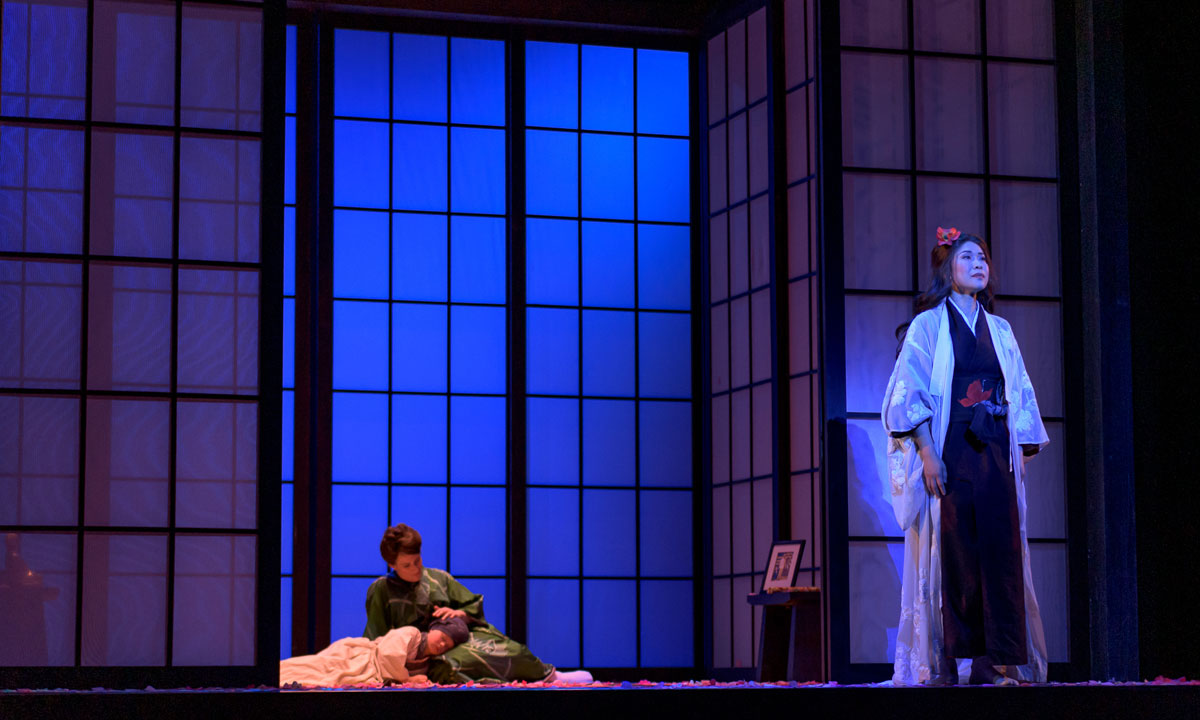 In this production, directed by Kate Cherry, Korean-born Mariana Hong masterfully inhabits the role of Cio-Cio San. Her operatic studies in Milan and extensive experience with Opera Australia amply reward with a pure, expressive and soaring soprano that makes light work of the most challenging of Puccini’s arias.

Also notable are Caitlin Cassidy, ably embodying the loyal Suzuki and expressing empathy for her mistress’s distress with vocal depth and fluency, and Douglas McNicol, whose dramatic baritone fills the theatre with virtuosic power.

Christina Smith’s design highlights the beauty of Japanese aesthetics, the stage set’s focal point a house with sliding doors that open onto a garden whose flowers are enhanced by the sumptuousness of the authentic costumes. Matt Scott’s lighting perfectly amplifies the drama on stage. Together with the excellent Adelaide Symphony Orchestra (conducted by Tobias Ringborg) and the State Opera Chorus, this lavish production is a joy to watch, though it ripples with the discomfort and complex responses evoked by this tragic tale of cruel racial exploitation.

State Opera is presenting Madama Butterfly at the Festival Theatre until November 23. It is running concurrently with Gilbert and Sullivan’s comic operetta The Mikado (read InDaily’s review here).